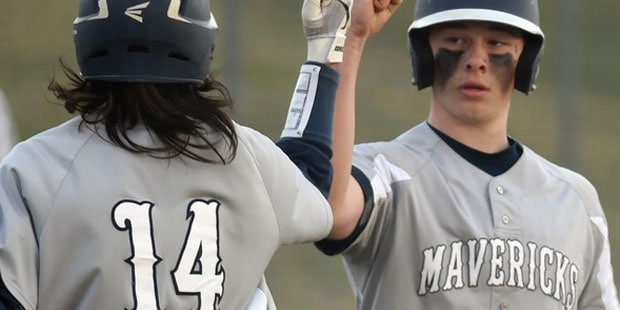 Broadneck inches up to No. 6; Severna Park and Marriotts Ridge move into the Top 10; John Carroll and South River slide

We have no new teams and nobody dropped out from last week’s VSN Baseball Top 20 while the first five teams remained intact with Nos. 6 through 11 playing some musical chairs. Howard (13-1) took four more games last week to run its overall record to 13-1, while Calvert Hall stood its ground at No.2 winning two more MIAA A Conference games to remain unbeaten in the league at 11-0 and 16-3 overall.

Gilman (16-8, 8-4) hosts Calvert Hall on Monday and the Greyhounds are in third place in the A Conference with surprising McDonogh (11-6) holding second place at 7-3 in the conference. The Eagles led by power hitting Kyle Whittaker have soared six place from No. 19 to No. 13 after crashing into the Top 20. McDonogh will host No. 11 Mount St. Joseph (10-5, 7-4) on Wednesday and No. 2 Calvert Hall on Friday.

Unranked Loyola (6-6) is also 7-4 in the A Conference and could be making a late season run as the Dons did in 2017 when they won it all for the first time in 71 years. The Dons have three conference games this week – hosting No. 11 St. Joe on Monday, visiting No. 3 Gilman on Wednesday and No. 14 John Carroll comes calling at Blakefield on Friday.

John Carroll (10-6, 4-6) took the biggest hit falling eight places to No. 14 after three straight MIAA A Conference games last week. The MIAA A Conference continues to dominate the VSN poll with six ranked teams followed by Anne Arundel with five and Howard, four. Those three leagues place three teams each in the Top 10.

South River (10-4) of Anne Arundel fell five spots from No. 7 to No. 12 after losing three of four games last week, two of their losses in county action leaving them tied for second in the league at 8-3 with No. 8 Severna Park (12-3). Broadneck (10-2) is the Anne Arundel leader at 9-2 moving up two places from No. 8 to No. 6 this week and the Bruins have a big week hosting the two second place teams, Severna Park on Wednesday and South River Friday.

Last week: lost to Northeast, 3-2; defeated then No. 10 Chesapeake-AA