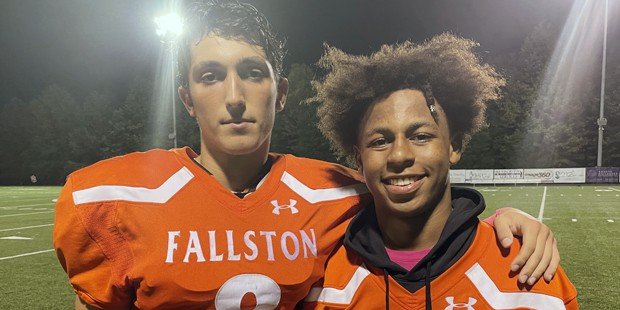 by Gary Adornato
With the offensive momentum swinging back and forth faster than a ping pong ball in a world class match, host Fallston and visiting Bel Air racked up big points in the Cougar pit, Friday evening. In the end, however, the Cougars got just enough defense to back sensational performances by junior quarterback Aiden Dixon and senior wideout Dylan Wheeler to pull out a 42-33 non-league UCBAC football victory.
Dixon, who completed 16-of-23 passes for 382 yards and four touchdowns, connected with Wheeler seven times for 220 yards and three scores. The duo’s biggest play was a 50-yard touchdown pass, with 8:58 to play in the fourth quarter, which was followed by Dixon’s two-point conversion run, to give the Cougars a two score lead at 42-33.
Fallston needed every big play it could muster from Dixon and Wheeler to overcome the incredible 317-yard rushing performance by Bel Air junior Nathan Furrow.

Furrow scored on runs of 57 and 58 yards and had a 44-yard scoring run called back by a holding penalty. Late in the third quarter, with his team trailing 34-33, Furrow broke off a 58-yard run to give the Bobcats a first-and-goal at the Fallston six, setting up the most critical sequence of the game.
With Furrow winded from so many long runs, Bel Air handed the ball to Gavin Shaw two straight times and inched up to the four as the third quarter expired. On third down Tre Dennis tried to get outside but was stopped and the Bobcats were then called for a false start that pushed them back to the 10. Next quarterback Ashton Grewe’s fourth down pass fell incomplete in the end zone as Fallston completed a goal line stand.
Eight plays later, Fallston was at midfield, setting the stage for the final Dixon-Wheeler touchdown connection of the night. Earlier Wheeler had scored on receptions of 36 and 71 yards.
“He played great,” said Wheeler of his junior QB who pick up the position just 10 weeks ago. “We had a great chemistry from the start. Every game, me and him, just making plays. It’s great. I love him. He’s a great quarterback and a great guy.”
Junior Evan Bradley-Dozier also had a strong night for Fallston, rushing 16 times for 72 yards and two scores. Dixon added 22 carriers for 65 yard and a touchdown. For Bel Air, Grewe ran for two scores and threw for a third.
In addition to its goal line stand, the Fallston defense came up with four interceptions, including two by junior Nathan Flannagan. Senior Ben Ziervogel and junior Tyler Terry had the other two. Terry’s pick ended Bel Air’s final possession with less than a minute to play and the Cougars were able to take a knee to complete the victory.
“The defense has been getting better all season,” said Fallston coach Keith Robinson. ”They dug in when they had to and came up with the goal line stand and four interceptions.”
With regard to his offense, Robinson believes his guys have the ability to play any kind of style.
“We have weapons on the outside, so we’ve been able to go on the ground, but also through the air,” said Robinson. “We’re certainly are equipped if we have to throw the ball. He (Dixon) is such a dynamic kid that when plays break down, he’ll extend plays. He works so hard.”
Furrow did his best to match that effort.
“I played my heart out,” said Furrow. “We just came out short. I tried my hardest, but in the end a game’s a game, some you win, some you lose. We’re going to go on and get the next one next week.”
Bel Air head coach Eric Siegel was not surprised by his junior’s performance
“He’s just a heck of a football player,” said Siegel. “Obviously, the offensive line did a great job blocking for him, but he put us on his back there for a little while and he had a heck of a football game. It’s unfortunate, but Fallston made the stops they were supposed to and we didn’t. They made a couple more plays than we did and that’s part of the game sometimes.”
Fallston, which plays in the UCBAC’s Susquehanna Division, the lower of the league’s two levels, had not defeated Bel Air, which is in the Chesapeake Division, since 2013. The Cougars improved to 6-0, while Bel Air is now 3-3.
Pictured above: Fallston’s dynamic duo of senior receiver Dylan Wheeler (left) and junior quarterback Aiden Dixon. Dixon threw for 382 yards and four touchdowns, with 220 of those yards and three of the TDs going to Wheeler.
FALLSTON 42, BEL AIR 33
BA 13 6 14 0 — 33
FALL 7 14 13 8 — 42
1Q
FALL – Evan Bradley-Dozier 3 run (Jason Roberts kick)
BA – Nathan Furrow 57 run (kick failed)
BA – Ashton Grewe 6 run (Jack Henry kick)
2Q
FALL – Bradley-Dozier 1 run (Roberts kick)
BA – Jeffrey Hess 8 pass from Grewe (pass failed)
FALL – Dylan Wheeler 36 pass from Aiden Dixon (Roberts kick)
3Q
BA – Furrow 58 run (pass failed)
FALL – Wheeler 71 pass from Dixon (Roberts kick)
BA – Grewe 13 run (Hess pass from Grewe)
FALL – Dixon 3 run (Roberts kick)
4Q
FALL – Wheeler 58 pass from Dixon (Dixon run)