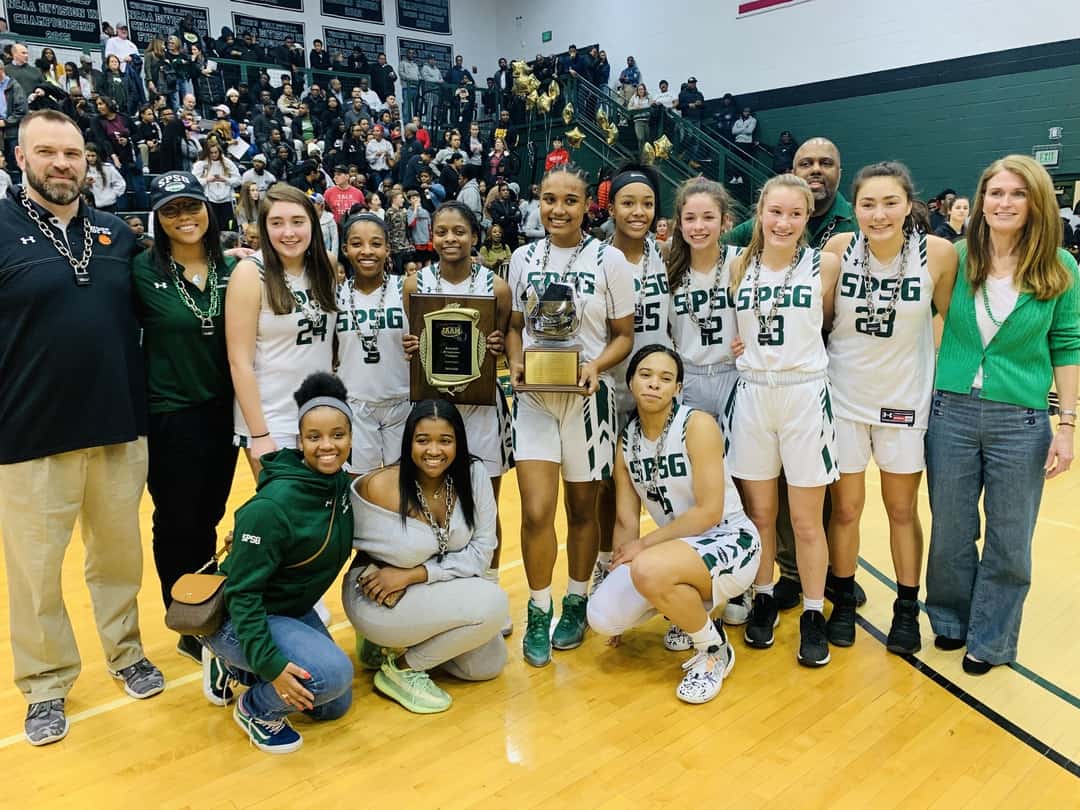 Before Sunday’s IAAM B Conference basketball championship game, St. Paul’s School players wore a chain necklace with a lock to emphasize playing lockdown defense. The philosophy worked for three quarters against Mount Carmel, which started picking at the No. 9 Gators’ title reign with a second half flurry.

In the end, St. Paul’s experience proved too much for the upstart Cougars, claiming a 58-54 victory in front of nearly 1,300 at Stevenson University. Senior guard Destiny Ryles finished with a game-high 25 points for the Gators (23-3 overall).

They earned it, blowing a 17-point second half lead.

“We’ve been there before. We had games this season alone where someone came back on us, went up, and we were able to figure it out and comeback,” said Gators coach Pat Conrad. “I reminded them about keeping our composure, play like we practice and we’ll be fine. ”

“My team knew we were going to win at the end,” said Ryles.

With the game tied at 54, Ryles had her shot blocked by Mount Carmel’s Hawa Doumbouya, but got the ball back and was fouled with 24.1 seconds left in regulation. Ryles converted two free throws for the lead.

Gators sophomore Madison Beale forced a Cougar turnover on an inbounds play with 16.3 seconds to play, and Ryles was fouled after getting inbound pass from Beale with 13.7 seconds left.

Ryles missed the first free throw, then hit the second making it 57-54. Satchell got her hand on the ensuing inbound pass under the basket and was fouled with 11.2 seconds remaining.

Satchell said it was defense-first Sunday.

“The last practice Coach Pat said he didn’t care about offense…defense wins games,” said Satchell, a sophomore forward. “We played hard on defense…they (Mount Carmel) made their own turnovers without us trying to get the steal.”

The first half for Mount Carmel was a debacle with nearly 20 turnovers, mostly unforced. The Cougars had 10 fouls by the middle of the second quarter, putting St. Paul’s in the double bonus.

The Gators led 26-14 at halftime, then advanced it to 31-14 after a 3-pointer from Madison Cha and a Alex Sawyers’ basket. St. Paul’s appeared headed to a resounding repeat.

Suddenly, Mount Carmel (16-14) and its 15 underclassmen, started growing up on the biggest of stages. The Old Eastern Avenue school trailed 40-32 entering the fourth when Doumbouya took over.

The agile 6-foot-4 freshman scored nine points in the frame, including a nifty reverse shot, giving Mount Carmel its first lead, 51-50, since early in the first. Doumbouya was called for an offensive charge, after Ryles, 5-4, hit a off-balanced runner in the lane, giving St. Paul’s the lead back.

The Cougars regained the lead, 53-52, after Doumbouya got another shot off the glass to fall, but Ryles answered again, finding Cha for a short jumper with 1:02 left to play. Doumbouya was fouled attempting a put back off an offensive board, and hit one of two free throws.

St. Paul’s called timeout with 43.4 seconds remaining and put the ball back in Ryles’ hands.

“Destiny is the heart of our team,” said Conrad. “As Destiny goes, we go.”

“We trust Destiny. We know she’s going to get to the basket or get a fouled,” said Beale.

Doumbouya and junior guard Tamara Stanford each finished with 11 points for Mount Carmel, seeking their first title since 2006 (C). The Cougars lost St. Paul’s, 57-47, back in early December.

“My girls weren’t afraid. They accepted the challenge,” said Long. “I’ve learned so much this season, like how much I love this…It’s been a great ride.”

It’s been a great run for St. Paul’s, which won its final 14 decisions this season. The Gators have 19 straight IAAM B decisions since last season.

“I told them we weren’t sneaking up anybody like we did last season,” said Conrad. “This year, we were everybody’s Super Bowl. We had a bullseye on our back every single game this season and we were able withstand a lot of good teams.”