New Town running back Antoine Collins is chased by Owings Mills’ Raiheem Olalekan during the first half of Thursday’s Baltimore County Division II football contest. The Titans maintained at least a tie for first with a 12-0 victory over the Eagles in northwest Baltimore County.

The Titans defeated the Eagles, 12-0, in a Baltimore County Division II match. Andre Stuckey had a rushing touchdown for New Town and junior quarterback Shawn Miller connected with Emmanuel Higgins for another score.

The Titans (6-2 overall, 4-1 Division II) got a stout defensive effort, posting their second straight shutout victory over their Owings Mills rival. The win keeps New Town tied for first in the loss column with Eastern Tech and Randallstown (both 3-1), which have Division II matches Friday evening.

After winning its final five decisions in 2017, New Town is building a different momentum under first-year coach Mike Savage.

“The coaches have done everything to make this organization better,” said junior defensive end/linebacker Nykholas Hutchison. “It’s more uptempo, more organized, more disciplined. You can see it in our record and our game plan.”

“They were talented, but they didn’t know X’s and O’s well, they didn’t know the position other than their natural talent,” said Savage, a former Mount St. Joseph and Milford Mill Academy assistant who guided the Pikesville Wildcats youth program to eight straight league championships. “They know those things (X’s and O’s) and that’s making us better.”

Fortunately for the Titans, their defense continued their mastery of the Eagles. New Town allowed 130 yards Thursday for its second shutout of the season.

“It’s a tight knit unit. We’re close like brothers,” said Hutchinson. “We do things together and that makes us better individually.”

The Titans’ offense needed five plays to cover 40 yards as Jeter crossed the goal line from four yards. Owings Mills setup the drive with a personal foul after the opening kickoff and a roughing the passer penalty.

Miller and Higgins followed Jeter’s 14-yard run with the 40-yard strike, extending New Town’s lead to 12-0 in the second quarter. The Titans failed to get points after reaching Owings Mills’ 7 in the second quarter, and weren’t able to take advantage of Darius Broach’s blocked punt that gave New Town the ball at the hosts’ 15.

“Our offensive line did a great job…we had trouble executing,” said Jeter. “We got so close and got too excited.”

The Titans believe they’re heading in the right direction with matches against Overlea and Randallstown remaining in the regular season. New Town currently sits third in the Class 2A North Region standings.

At halftime, Owings Mills honored the 1982 football team which won the school’s first championship. The team finished 7-3 to win the Baltimore County B/C Division, defeated Milford Mill Academy and Brian Jordan, who would go on to play in the NFL for several seasons with Atlanta Falcons and 15 years with several Major League Baseball teams.

The Eagles were coached by Keith Taylor, who was the school’s first athletic director and boys’ basketball coach. More than a dozen former players from the 1982 team were on hand Thursday evening along with Taylor. 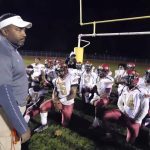