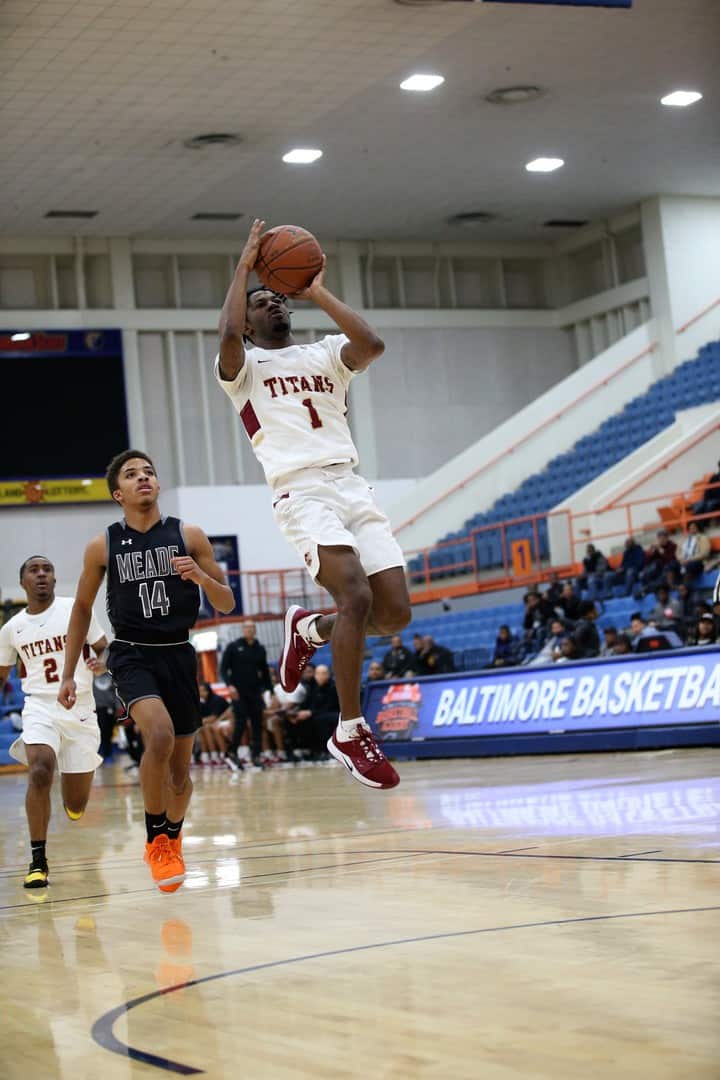 Though its close to mid-January, New Town High boys basketball team is still in the adjustment phase. The Titans took a step in their process Thursday evening at the 24th Basketball Academy.

Trailing 37-26 at halftime, Lake Clifton went on a 16-8 spurt, capped with Zac Blackwell’s three-pointer, to pull to within 45-42 with 3:52 left in the third period. Hunt immediately answered for Rock Creek, scoring 11 in a 13-0 retort, putting the Upper Marlboro school back in command.

“We made changes at halftime to slow up their scoring, and we started making some shots ourselves,” said Lake Clifton coach Herman Harried. “But like any good team, they [Rock Creek] made plays after we made plays. We just dug too deep of a hole.”

New Town got all it could handle from Meade in the first boys game in this year’s Basketball Academy. The Titans were finally able to put away the Anne Arundel County squad in the latter stages to move to 6-1.

Mills got his own miss inside and scored, starting a 6-0 spurt as Twan Carter’s steal and layup made it 54-45 with 2:31 to play. Kyree Johnson scored all of his six points in the third quarter run, putting the Owings Mills school ahead for good.

“These type of games build character,” said Wise. “We made a lot of mistakes, but made adjustments that will help us in the long run.”

“We didn’t take them [Meade] lightly, but they were ready to fight…they punched us in the mouth,” said Robinson. “In the second half, we had to come together and fight.”

Robinson’s follow sparked a 11-0 run, including a three-pointer and drive by Robinson and two scores from Johnson, for a 39-30 lead in the third. The defending Baltimore County champs led 43-33 after three.

Meade, in its first appearance at the Basketball Academy, kept battling behind the shooting of Johnson. Johnson hit four three-pointers Thursday including consecutive daggers to pull the Mustangs to 43-39 with 6:34 left in regulation.

Meade was still in contention with 31 seconds left after three free throws from Johnson made it 58-52. But the Mustangs failed to convert a couple of one-and-one opportunities and turned the ball over after the Titans missed the front end of an one-and-one.

“I was very happy with our intensity and we hit shots…when we hit shots we’re a much better team,” said Glick. “I thought our kids competed.”

While most teams have played double-digit games, New Town has played only seven to this point. The pace will pick up for the Titans, who next play Prince George’s County 4A power Henry A. Wise Saturday evening at Hill Field House.

“We’re still working the kinks out. We’re going to be playing a lot of games in January and this is where we’ll see what we’re made of,” said Wise, whose team plays Milford Mill and undefeated Loch Raven next week in Baltimore County play before a trip to Pittsburgh for the Stand Against Violence Tournament next Saturday. “These tough games where things aren’t going our way and there’s adversity, we need that.”