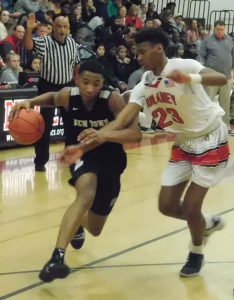 New Town guard Martaz Robinson (left) drives past Dulaney’s Isaiah Cornish during the second half of Wednesday’s key Baltimore County boys basketball contest. Robinson had 10 points as the No. 7 Titans dominated the sixth-ranked Lions in front of a packed gym in Timonium.

Even after scoring a career-high 31 points, New Town High junior forward Andrew Mills was more jacked up about the way the seventh-ranked Titans played defense in a thorough 78-54 domination of No. 6 Dulaney in front of a capacity audience Timonium Wednesday evening.

“We just focused on defense and locking them up,” Mills said. “Our guards are dogs, and they really locked down on their guards.”

His coach, Derrick Wise, said that the Titans watched lots of videos of the usually prolific Dulaney offense and the way it had mauled several county opponents this season.

“We understood what we needed to do to beat a tough team on the road,” Wise said. “And we were aggressive and assertive. We had three unbelievable days of practice. I told the kids in the locker room that they have to refuse to lose and that we can’t leave this gym tonight with a loss, and they bought in.”

Without standout forward Julian Reese, who missed the showdown because of the flu, New Town (13-1 overall) remained undefeated in Baltimore County’s Division I at 7-0. Barring a collapse, the Titans will play in the league final next month at Towson University’s SECU Arena.

After Dulaney sophomore guard Ryan Conway scored all of the Lions’ points while staking them to an early 8-4 advantage, the Titans went on a 13-4 run to grab a 17-11 lead after the first quarter.

The Lions (11-2, 6-1 Division I) would eventually regain the lead, 21-20, in the second quarter before New Town senior Maurice Smith converted back-to-back drives and added a free throw to ignite another strong sequence by the Titans, propelling them to a commanding 11-point halftime lead at 37-26.

Mills, whose back-breaking buzzer-beating three-ball ended the half, matched that effort with another successful launch from beyond the arc to open the second half.

“I’m always going to be confident in my shot,” Mills said, noting that his seven threes were also a personal best.

While expecting some push-back by the Lions with a big crowd on hand to urge them on, New Town just kept plowing forward with a withering defensive effort and spot-on fast break that put even more distance between the two county stalwarts.

By the time the final period began, the home team trailed, 53-35, and was never able to draw closer than that the rest of the way against a rival that was praised for its preparation and poise under pressure by Dulaney coach Matt Lochte.

“New Town was really prepared and they are really well coached,” Lochte said. “They beat our pressure by making that extra pass. They just played so well together and really deserved to win. They were the better team tonight and we could play them again — and they’d beat us again. We just didn’t show up tonight. We didn’t make that extra pass or crash the boards like they did.”

Conway, who led Dulaney with 21 points, was a rare bright spot in a game in which the Lions converted just 29 percent of their 3-point attempts and a made only 33 percent of their overall shots from the floor.

They also knocked down less than 70 percent (14 for 21) of their free throws, the minimum standard that Lochte demands from his players.

“We talked about being down 11 at half, but, like I told them at halftime, that’s nothing,” Lochte said. “Because we can score in bunches. But we just didn’t buy into each other like we needed to. We didn’t follow the script.” 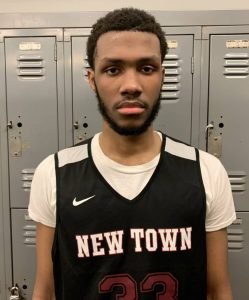 Andrew Mills picked a great time to have his best performance for New Town. The junior forward had a career-high 31 points Wednesday, helping the Titans gain a favorable path to next month’s Baltimore County title game at Towson University’s SECU Arena.

The Lions will watch video of the game, warts and all, in what Lochte called an “honest” session on Saturday after consecutive games against unranked opponents Loch Raven on Thursday and Dundalk on Friday.

New Town will conclude its week after taking on Sparrows Point on Thursday.