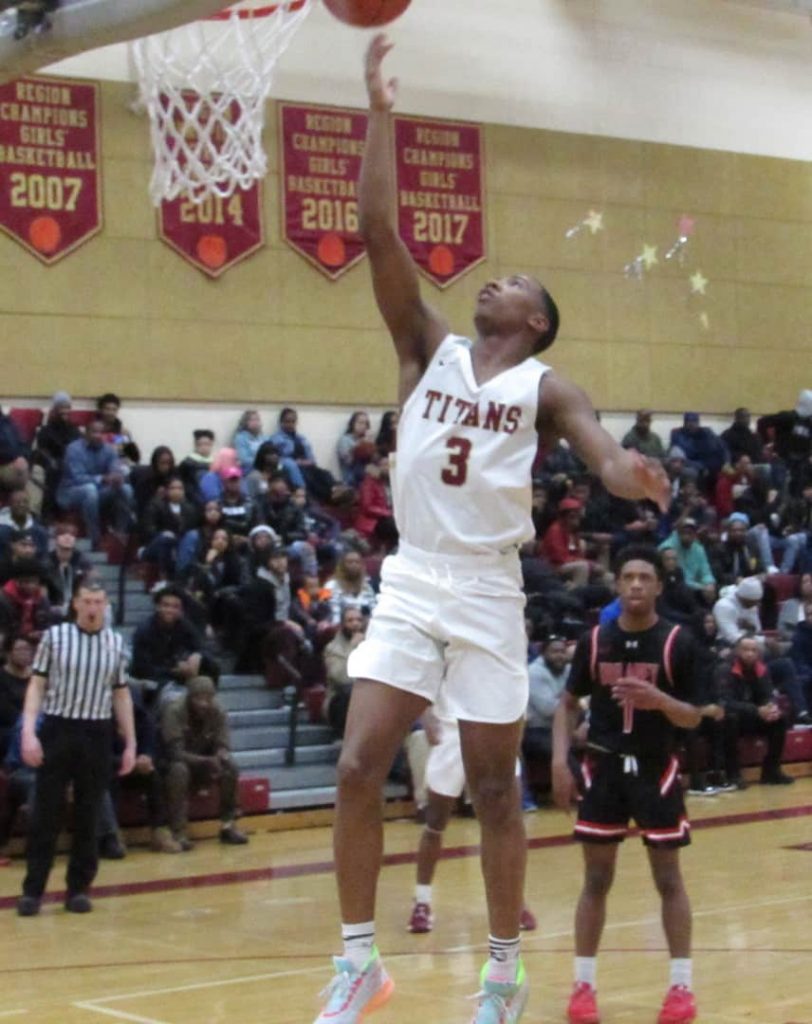 New Town guard Martaz Robinson puts in two of his game-best 28 points Wednesday against Dulaney. The No. 6 Titans built a huge first half lead before holding off the ninth-ranked Lions in Baltimore County boys basketball action in Owings Mills.

“I told my guys we did what we supposed to do,” said Marcano. “Keep a calm level head, don’t let them to get into your head…let’s get to the locker room and enjoy the win.”

The No. 6 Titans’ 77-66 decision over the ninth-ranked Lions was a  fortitous effort. Senior guard Martaz Robinson finished with a game-high 28 points for the Titans (12-1), who received 15 from Andrew Mills.

After dominating the opening 16 minutes, defending Baltimore County champ New Town had to grind in the final minutes against a Dulaney comeback and take a major step towards a return trip to the league final at Towson University’s SECU Arena next month.

In winning its 12th straight, New Town (12-1 overall) remained undefeated in Division I (4-0), one game ahead of Dulaney, Parkville and Pikesville (all 3-1), with the head-to-head tiebreak advantage over Dulaney and Pikesville. No. 19 Woodlawn is the top team currently in Division II.

The top teams in Division I and II meet Feb. 25 at SECU for the county title.

The Titans showed their championship resolve after a 24-point lead was only six with less than two minutes remaining in regulation. Robinson scored five of the Titans’ final seven points.

Robinson, who will play for Delaware State University next season, was gratified with the win.

“This one feels very good. We came into the season and people said we weren’t the best team in the county,” he said. “We just wanted to show everybody what we’re capable of, and we still got it.”

The Titans silenced their so-called doubters with a relentless first half performance, scoring the game’s first 13 points. It was a 27-6 early in the second after Kyree Johnson’s basket.

New Town hounded Lion star guard Ryan Conway, who had four points in the opening half. Dulaney (9-4) turned the ball over 19 times.

“We were playing big, getting deflections, we were vocal,” said Titans’ second-year coach Derek Wise. “We were rebounding the ball, limiting them to one shot.

We knew he (Conrad) was the top priority. We followed the game plan in the first half, limit his looks and opportunities, denying him the basketball.”

Conway, arguably the area’s top junior guard, got loose in the second half (15 points) as Jaylin Webster’s eight points and reserve Ethan Anderson two three-pointers brought Dulaney within 48-39 late in the third quarter. Robinson immediately answered with a jumper for New Town, which led 54-42, going into the fourth.

The Titans looked to had regain command, 60-44, after senior reserve Gerrell Johnson’s follow-up off a Robinson miss with 5:29 left in regulation. But the Lions charged back with a 20-10 run, capped with Conway’s three-pointer, to trail 70-64 with 1:49 remaining in regulation.

New Town turned again to Robinson, who drove into lane and put up a left-handed layup. Mills intercepted a Dulaney pass and got the ball to Robinson, who went to the basket and was fouled. He hit one of two free throws, putting the Titans up nine with 84 seconds left.

“He’s a special player. He has one of the best IQs around,” said Wise. “He can score with anybody and plays on the both ends of the floor. He just finds a way to win.”

Conrad finished with 19 points for Dulaney and Webster added 14 of his 16 in the second half. The Lions, who were embarrassed by New Town last season in front of a huge audience in Timonium, acquitted themselves Wednesday after an uninspired first half.

“We played so poorly…you turned it over against a very talented and well-coached team like New Town, you’re going to get exactly what we got tonight,” said Dulaney coach Matt Lochte. “We dug ourselves too big of a hole…The guys were much better in the second half, but we played so poorly in the first half.”

Wise said Wednesday’s victory was “a statement win.” It was the Titans’ first match against a VSN Top 20 opponent since losing their season opener to No. 5 Edmondson last month.

“This win should be a statement for everybody in the county,” said Robinson. “We’re not to be play with and we’re the best team in the county.”