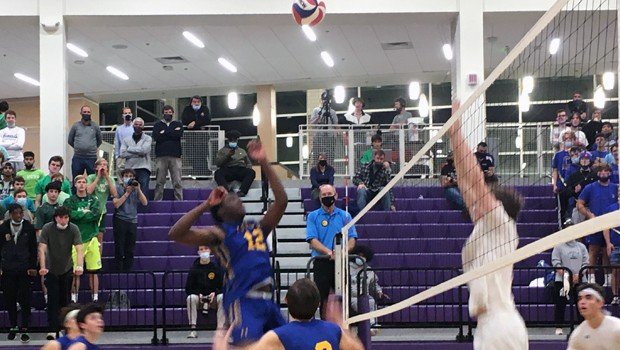 Having split the last 10 MIAA A Conference volleyball titles, Gilman and Loyola are hardly strangers when it comes to meeting in the championship round.

Gilman’s 6-foot-5 outside hitter Alex Garrison, who had 14 kills in the match, said that his team believed in itself after the early loss to Loyola (17-4, 15-4 conference).

“We had a lot of confidence in our ability,” said Garrison, who shares captain duties with fellow seniors Wesley DeCosta and Michael Hemker. “We just had to work our butts off after that.”

All the sets were hotly contested, including the first one in which the Dons pulled to within 23-21 on a block by senior setter Josh Eckel.

However, Gilman closed out the opening set on kills by Garrison and senior opposite hitter/setter Hemker.

Despite two aces by Hemker to begin the second set, Gilman (19-1, 18-1) struggled at the service line and Loyola took advantage.

Loyola senior Jack Wendorf snapped a 9-9 deadlock with a crisp kill to start a 5-0 run that ended on one of Hemker’s team-best 16 kills.

Still, a pair of Gilman service errors stunted any idea of a comeback, especially with the way the Dons were rolling with the playay junior outside hitter Ty Hepting and senior Robby Kesselring at the net.

Senior Chris Connor finished off the Greyhounds on a kill adroitly set by Eckel.

The pivotal third set was tied at 23-all until an ace by junior Colin McPherson gave Gilman a slight opening that paved the way for senior Charlie Guyton (12 kills) to finish off the Dons on a kill that was ruled in the Greyhounds’ favor after close play at the net.

The fourth set ended in similar fashion, with the Dons looking for a net call on Hemker’s final kill of the season.

For instance, after a Connor kill knotted the score at 14-all, Gilman bolted ahead, 18-14, on kills by senior middle hitter Morgan Mednick, senior outside hitter William Wittstadt, Garrison and Guyton.

Nevertheless, Loyola fought back and forged ahead, 21-20, on big swings by Hepting, Connor and Wendorf and Kesselring until Garrison’s kill and another by DeCosta put Gilman back on top, 22-21.

Kesselring and Hemker traded scoring swats until the latter finally put the match to rest after some complaints by the Dons that the net had been touched.

Loyola coach Tim Baier said that the Dons had other chances to win the match.

He praised Gilman junior libero Seth Lindt, who played outstanding defense and was strong on serve-receive, for making a multitude of key plays — and also pointed to the hitting of Garrison and Hemker.

“(Lindt) was their MVP,” Baier said. “He played a great game by passing and setting up their strong hitters.”

Baier also called Eckel the “heart and soul” of his team.

“He drives the team in terms of his aggression,” the coach said. “He’s never satisfied.”

Gilman coach Diego Matorras said it was “unfortunate” with how those sets ended.

“Looking back, I should have asked the ref if he (Guyton) touched the net after the third set,” he said.

Regardless, in both cases, the officials conferred and called the plays in Gilman’s favor, meaning that the Greyhounds have now captured the title for the fourth time in the last five seasons.

“This win reflects the growth of the program this season,” he said. “Our program is all about growing and getting better.” 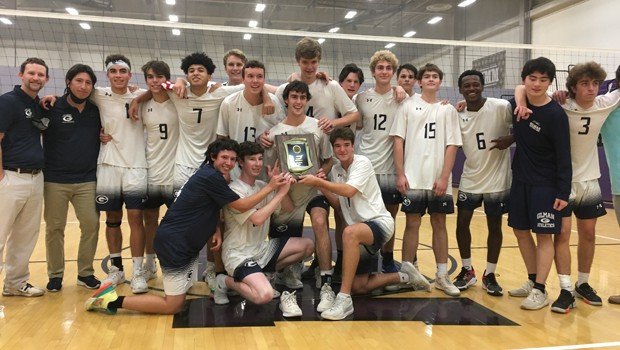