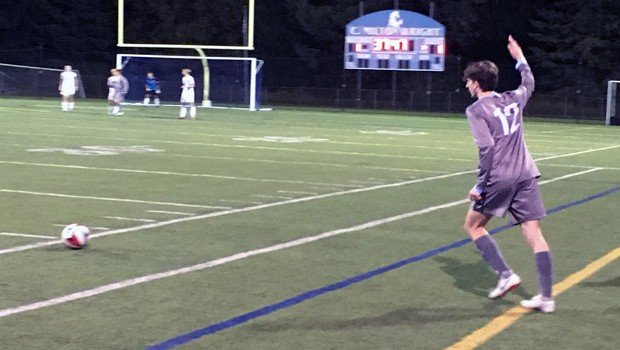 And then they played some more — 100 minutes of back-and-forth quality soccer with nothing much decided, other than the Mustangs and Huskies will share the Chesapeake Division crown and enter the postseason with high expectations.

A strong season continued for Patterson Mill sophomore Vinny Wysong, who scored the No. 16 Huskies’ goal in a 1-1 tie with 11th-ranked C. Milton Wright on the Mustangs’ Senior Night, Wednesday evening.

Patterson Mill has never won or shared a UCBAC title, so claiming that prize is a “big deal,” according to coach Wes Rich.

“I’d rather tie than lose,” he added.

Early on, it didn’t appear to be the Huskies’ night.

That’s because the Mustangs (10-3-1) had plenty of momentum after the pregame Senior Night celebration concluded and one of those 12th graders, Jacob Kegley, settled a ball and slotted it into the far right corner of the goal in the fifth minute for a 1-0 advantage.

C. Milton Wright then applied plenty more pressure to add to its lead with four corner kicks in the first 10 minutes, yet could not break through again.

Gradually, the visiting Huskies began to find their footing and tied the score on a beautiful arching shot by sophomore Vinny Wysong that veered into the far post from 30 yards out with 13:20 left in the first half.

“We weren’t generating any straight-on shots,” Wysong said. “So I thought I might surprise them by taking a shot from an angle. “I did a little L-pull around my defender and took the shot.”

Wysong, who scored both goals in a 2-1 win over Fallston and notched another goal to top Bel Air in overtime, said that he has at least 10 goals this season.

His coach, Wes Rich, was pleased that Wysong found the net at such a critical time.

“We knew that they (the Mustangs) would come out strong on their Senior Night,” he said. “So we had to weather those first 10 minutes. It was really big to tie it before halftime.”

Wysong had a couple of attempts on headers to go wide in a bid to break the deadlock early in the second half, and senior Cameron Dawson’s 40-yard drive was another threat that was turned away by C. Milton Wright sophomore keeper Jake Adams.

The Mustangs pushed forward as well with senior Adrian Gonzalez and sophomore Matt Luke looking to connect on any of the 14 corner kinks the hosts earned (Patterson Mill only had four).

One of Gonzalez’s headers clanked off the football crossbar late in regulation and Luk served another ball in the box that Patterson Mill senior goalie Ian Sauer quickly snatched out of harm’s way.

Gonzalez had another header saved by Sauer in the first overtime to maintain the status quo.

“Credit to Patterson Mill,” C. Milton Wright coach Brian Tully said. “They are a well-coached quality team that played a high-energy style and matched our athleticism. We thought we could have been better in some moments, but they were also dangerous at times. We will never be satisfied with a tie, but there are things we can build on and will be a benefit going into the playoffs.”