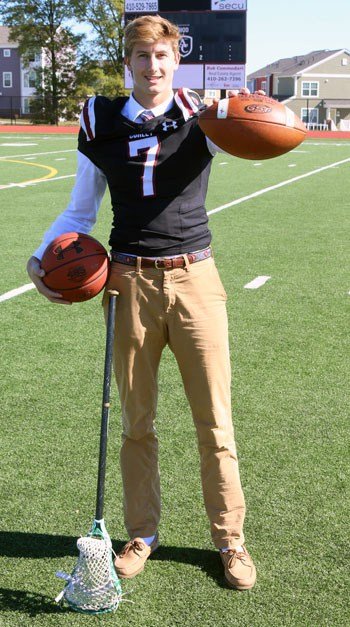 Curley’s Josh Knapp is a three sport standout – football, basketball and lacrosse – who is currently focused on the Friars run at a MIAA B Conference title. (Photo courtesy of Greg Malanowski)

Josh Knapp can do — and does — a lot of different things for Archbishop Curley’s basketball and lacrosse teams.

For instance, his ability to defend and rebound helped the Friars’ hoop squad reach the MIAA B Conference semifinal round last winter.

And, yes, the 6-foot-3, 183-pound senior power forward can also score, as his 12 points-per-game average and 21-points, five-blocks outburst against Indian Creek in the 2019 playoffs clearly demonstrate.

“Josh does everything you tell him to and he’s a great student of the game,” Curley basketball coach Darnell Hopkins said. “He’s a great athlete who always seems to be in the right spot.”

Hopkins said that when a football injury forced Knapp to miss the first six weeks of the season, the Friars were looking forward to his return.

“Toward the playoffs, he really turned it on,” Hopkins said.

Similarly, Knapp has proven his worth on the lacrosse field by scoring 26 goals and adding 20 assists running on the first midfield for the reigning B Conference champs.

He had a goal and two feeds in the title game against Glenelg Country School, a rival that knocked off Curley during the season.

“That loss to them really fired us up for the championship game,” he said.

“Josh has been on varsity for three years, and we’ve been counting on him more and more every year,” said Curley lacrosse coach Chris Ogle. “He’s a workhorse between the lines and plays just about every position a midfielder can play — offense, defense, wing on faceoffs and extra-man. He does virtually everything for us. The only unit he doesn’t play on is man-down. He has to rest sometime.”

Ogle said that although Knapp has not been an official captain, “he’s certainly a leader for our team.”

Yet his versatility on the gridiron is even more impressive, considering that he handles wideout, free safety, punting and kicking — kickoffs, field goals and extra points — duties for the 7-2 Friars, who knocked off Concordia Prep, 15-13. last Friday to earn a playoff berth.

To further unpack Knapp’s deep athletic toolbox, note that he punts and boots field goals and extra points with his right foot while using his left foot for kickoffs.

A traditional, right-footed soccer stye place-kicker and a right-footed punter, Josh Knapp uses a left-footed toe kick for kickoffs, producing eight touchbacks this fall. He is also a standout wide receiver and safety.

“I do a toe-kick left-footed,” the 18-year-old three-sport standout said, noting he already has accumulated eight touchbacks this season using the unorthodox method. “And I use the instep, soccer-style for field goals and extra points.”

So far, Knapp has converted a pair of field goals and 32 extra points in 37 attempts for the Friars this season.

His non-kicking contributions are also substantial, including five interceptions, two fumble recoveries, five pass defenses and a forced fumble on defense while averaging 8.2 tackles per game. Four of those tackles were for losses.

He said that his most memorable game so far this fall came on Homecoming/Senior Day in a 49-14 victory over St. Paul’s when he caught two TD passes (his only two receptions of the season), had two interceptions and added a pair of pass knockdowns.

“He’s just a natural athlete,” Ireton said. “And he picks up X’s and 0’s really quickly.

Knapp said that while he loves all three sports, football will be his choice to play in college.

He is considering several Division II schools and has had feelers from Football Championship Series programs, such as Richmond, Lehigh and William & Mary.

Boasting a 3.74 grade-point-average, Knapp said he is interested in exploring a career in criminal justice.

First things first, though, as a tough road game against John Carroll in Bel Air looms on Friday for Curley with the winner avoiding a first-round showdown against with top-seeded and No. 13 St. Vincent Pallotti the following weekend.

Still, if the Friars prevail against the Patriots, a date with second-seeded and two-time defending B Conference champ St. Mary’s, ranked 13th, will be no easy task.

Regardless of who they end up playing in the playoffs, the Friars know that their jack-of-all-trades performer will be on their side, which must be a comforting feeling.

And when he kicks, they are confident he will continue to put both best feet forward.