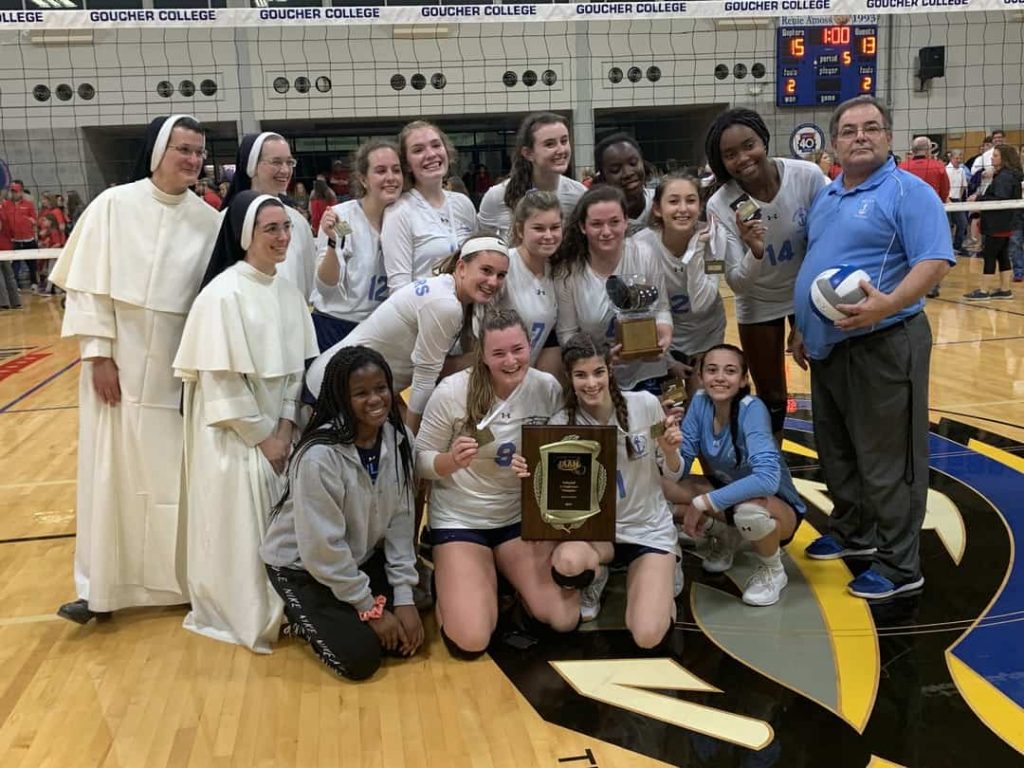 “I really wanted to watch them enjoy the moment because the team has worked hard all year long,” said Troy.

The Sailors are IAAM A champions again, and boy, they did worked for it. Fifth-ranked Mount de Sales defeated No. 8 Maryvale Prep in five sets,  for a third straight league title.

After winning the first two sets, Mount de Sales (18-2 overall) dug deep to vanquished Maryvale (16-3), which had a 5-point advantage in the 5th set. It’s the second 3-peat for the Catonsville school, which went back-to-back-to-back from 2008 to 2010.

“I really thought we going to lose it down all those points, but we stayed together as a team and fought til the end of the line,” said Mount de Sales outside hitter Kelenna Onkuwugha. “We never gave up not once.”

With her team in down 11-6 in the 5th, Onukwugha, a precocious freshman, started the comeback, sandwiching kills around sister Chidinma’s winner. Down 12-9, Mount de Sales took advantage of two Maryvale service errors and Chidinna Onukwugha’s winner winner which she hit while going toward the sidelines and got over the net and landed, for a 13-12 lead.

Kelenna Onkwugha continue the resurrection with an ace, putting Mount de Sales on the verge. Claire Neff, who sparked Maryvale’s dogged title pursuit Saturday, brought her team within 14-13 with a kill.

After a series of volleys, Golena put a shot in near the corner and Mount de Sales had its 7th title in 12 seasons.

“I trusted everyone of those girls to do their job,” said Sailor senior setter Grace Wallace. “When we got that 7th point I went back to serve and I looked at MG (Mary Grace Golena) and said ‘let’s go.’ We knew we were going to cranked it out.”

After Maryvale spoiled the Sailors’ Senior Night with a 4-set decision more than a week ago, Mount de Sales controlled the first two sets in the rematch Saturday. The Sailors established an 10-4 lead and had a 24-17 advantage before Goyana’s block kill ended a late Maryvale push.

Trailing 15-14, Mount de Sales ran off 8 straight points, capped with Chidinma Onukwugha’s block for a 22-15 lead in the 2nd set. Maryvale pulled to 23-18 before a serve error and attack error left it in 0-2 deficit.

The Lions (16-3), seeking their first title since winning the B crown in 2016, stormed back. The Brooklandville school established a 15-8 lead in the 3rd set before the Sailors got even at 15.

Nine lead changes and eight ties later, Maryvale claimed the set, with a kill from Neff and Mount de Sales unable to get the ball back over the net off Rory Kenny’s block.

Trailing 17-11, Maryvale got even at 18, thanks to another Neff kill. The Lions broke a 20-20 deadlock with Caitlin Shaffney’s kill and a block and kill from Burke and went on to keep its title pursuit intact.

The title was in Maryville’s grasp, up 5 with 4 points to go in the 5th. Then it slipped away.

Lions coach Missy Little was proud of her team’s effort. Maryvale only loses Neff and Burke from its starting rotation and have 12 letter winners scheduled back next season.

“They were amazing,” said Little, whose team’s 13-game winning streak was snapped Saturday. “The perserverance they showed from being two sets down…we lost the 5th set by two points. So many people underrated us all season long  and didn’t know what we have. I knew what we had and I knew we had a special group.”

It was a fitting end for seniors Dalila Hannibal, Fiona Cole, Wallace, Chidima Onukwugha and Anabella Nosel, who helped Mount de Sales to a 42-4 mark in league play (including postseason) the last three seasons. The Sailors lost only one league match this season.

Mount de Sales has had a different coach the last three seasons, and five in its run of 7 titles in 12 seasons.

Troy plans to return for the 2020 season as the Sailors attempt to win an unprecedented 4th straight title.

“You got to have talent and make sure they buy in,” said Troy. “They brought in to everything we taught them. We had different coaches from outside come in and give us some pointers and they did a great job of listening to whomever I brought in.”

“The support and trust we have for each other helped us pull out the win,” said Mary Grace Goyena, a junior hitter committed to the University of Pennsylvania. “We really wanted this and we went out and did it.”