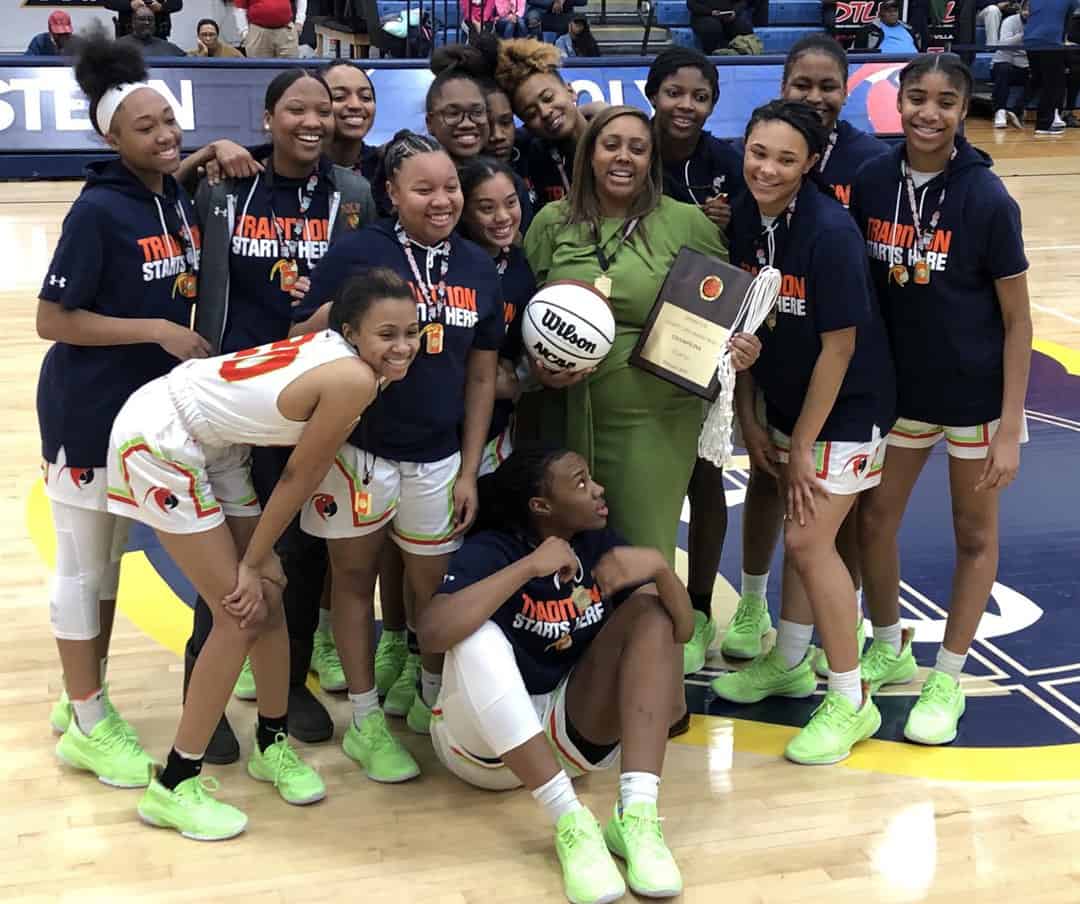 Engineers senior forwards, 6-foot-2 Ajae Petty and 5-11 Dasia Townes took advantage of a height mismatch in the paint to combine for 31 points and 13 rebounds in a 52-48 victory over eighth-ranked Western.

In the first half, the Engineers (22-1 overall) dominated the inside on both ends of the floor. Their active zone kept the Doves to just three fields goals in the half, all 3-pointers. The Doves managed just three points, all on free throws, in the second quarter and did not hit a 2-point shot until midway through the third quarter.

Poly out-rebounded Western (15-4), 29-15, in the half and the Doves managed just five offensive rebounds, two of them team rebounds.

Still, the quick and scrappy Doves, who lost to Poly 74-65 in December, never trailed by more than 11 and rallied to within one in the final two minutes.

In the sixth straight city final between the next-door neighbors, Poly opened the game with the first six points, boosted the margin to 10 midway through the second quarter and led 24-13 at the half.

Tuesday night, Poly managed to stay ahead, but just barely. Western tightened its defense in the second half and, for a while, found an answer to Poly’s height edge in 6-foot sophomore Amya Jenkins, who didn’t start.

Western coach Kenneth Robinson said his young team can only counter a significant height disadvantage with better defense and Jenkins played a key role early in the second half against Petty, who is headed to LSU.

“I told them … we’ve got to gang up on defense, because their length will bother us,” Robinson said. “Petty’s going to bother us period, so we’ve got send two at her and I think when Amya came in, that changed the whole concept, because with a bigger body to put on Petty that changed [the game] a little bit.”

Doves shooting guard Ny’Ceara Pryor, who finished with 19 points, started the comeback with a 3-pointer 20 seconds into the second half. Sanaya Gray then hit two free throws to cut the Poly lead to 24-18 a minute into the half.

Poly answered with an 8-2 run with four points each from Petty and Townes as well as an assist each by Cach’e Wilson and Da’Brya Clark.

Western kept battling and Kortnei McMurray’s 3-pointer to end the quarter had them within 36-32.

“I think they’re tenacious,” she said. “I don’t think it’s a whole lot about us, but I think it was about them. I think we kind of stopped talking and we were a little bit shocked that we were playing as badly as we were in the third quarter.”

Petty said, “I think it was more of us just settling and like coach Peace told us it’s just keep our foot on the gas. We’re really talented and I feel like sometimes we settle for less when we can keep going. I feel like that’s what we kind of did in the third quarter, so we just wanted to pick it up.”

The Engineers stalled Western’s momentum in the final quarter and pushed their lead to 42-36 on two Tenea Robinson free throws as each team scored most of its fourth-quarter points from the line.

Gabby Johnson brought the Doves within three with Western’s sixth 3-pointer of the game. Townes answered with a pair of free throws for a 45-41 lead.

Western then went back to the inside. Petty fed Townes for a layup and Robinson hit Petty for game winner and a 49-44 lead with 57 seconds left.

The Doves closed to within 50-48 on Mya Henson’s basket assisted by Gray with 26 seconds left.

Clark, a freshman guard, added insurance points on two free throws with 10.7 seconds left as the Engineers finished 23-for-33 from the line.

Petty, who transferred from Institute of Notre Dame, for her senior year, had been aggressive inside all game, so she got four passes from her teammates in the fourth quarter. She hit one basket and was fouled three times, hitting just twice from the line although she finished 9-for-14.

“That was another thing of us working hard, “Petty said, “My teammates just looking for me, noticing who was hot at the time, rebounding, just putting our all into it and basically just putting all together what we’ve been working for all season.”

Both teams now move on to the state playoffs. Both are No. 1 seeds in their respective regions and have byes through Friday’s opening round.

The Engineers, who reached the state Class 3A title game last season, will host the Towson-Woodlawn winner in the 3A North Region I semifinals Monday.

The Doves, who made it to the state 4A semifinals last year, will host Perry Hall or Mervo winner in the 4A North Region I semifinals Monday.