After falling short in past two IAAM A field hockey championships, Garrison Forest edges No. 1 Spalding for first title since 2012 on McComas’ early goal (VIDEO HERE!) 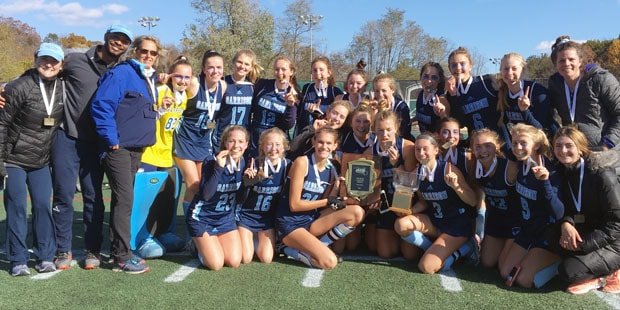 Notwithstanding the different spellings of their first names, senior midfielder Ryleigh McComas and senior forward Riley Patro were firmly on the same page when Garrison Forest was attacking No. 1 Archbishop Spalding’s goal early in the first half of the IAAM A Conference championship field hockey game Sunday afternoon at Stevenson University.

From one Ryleigh to another Riley, their connection on the game’s lone goal was enough to carry the Grizzlies (16-3-1, 7-2-1 conference) to a 1-0 triumph and their first title since since claiming back-to-back-to-back crowns from 2010-2012.

The goal came in the fourth minute of the contest and stood up, thanks to some fine play by an amped-up Garrison team eager to avenge a 3-1 loss in the regular season to the Cavaliers.

“They aren’t faster than us, but they were faster to the ball than we were,” Riley Patro remembered about the rivals’ quick pace in the October 3-1 setback in Severn. “That was the low point for us. The next day at practice we decided that it wasn’t over for us.”

Garrison Forest coach Malcolm Belin admitted that his team was “a little frazzled down at their place” in the earlier loss.

Having been turned away by Notre Dame Prep in the past two finals, the current Grizzlies were starving for a trophy.

The Patro-McComas connection made it happen, although a little bit of good fortune was involved when the play began on an insert from McComas on a penalty corner.

“Ryleigh got the ball to me, but I mis-hit it,” Patro said.

The ball then trickled close to McComas in a cluster.

“I got it on the back of my stick,” McComas said about the shot from the doorstep with a large contingent of players surrounding her.

Spalding was on its heels for much of the first half and beyond — and that’s a bit of an understatement.

The Cavaliers (18–3, 8-2), who were not shut out during the regular season and outscored opponents, 58-16, entering the final, never found their rhythm in the opening 30 minutes.

Spalding was not only held scoreless by a sturdy backline featuring senior Elizabeth Bossi, junior Sydney Townsend and sophomore Cameron Medinger playing in front of freshman goalie Alyssa Klebasko, the top seeds didn’t muster a shot until just over 10 minutes were left in regulation when sophomore forward Katie Fichtner let one fly.

Unfortunately for the Cavaliers, it was their only shot on goal, although they did mount a couple of dangerous crosses that never found a friendly stick, including one by junior midfielder Lily Grant with just over a minute to go.

“When you get to this game, a bounce here and a bounce there can make a huge difference,” Spalding coach Leslee Brady said. “And it’s always hard to play from behind against a good team like that. They (the Grizzlies) came out fast and we just weren’t ready for that speed. We created some good opportunities in the second half, but we couldn’t finish.”

Garrison Forest, on the other hand, was much more energetic throughout the match, peppering Spalding junior goalie Sophia Somerville (7 saves) with nine shots while compiling a 10-1 advantage in penalty corners.

“We just really wanted it from the beginning,” Belin said. “We feel that this is
where we are supposed to be.”