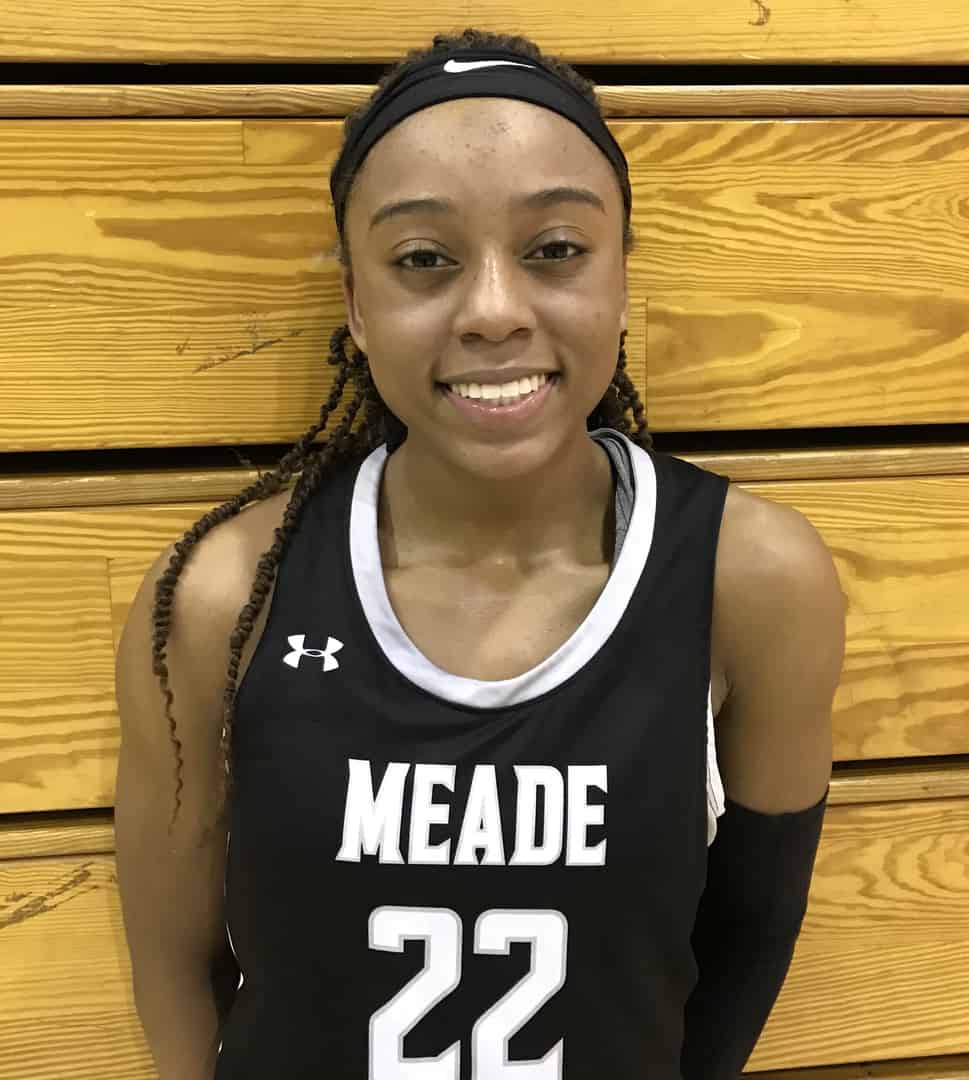 Jaela Reid had 22 points for Meade girls basketball Monday evening. The No. 13 Mustangs ended rival and No. 10 Old Mill’s season with a 66-60 victory in a Class 4A North Region I semifinal in Millersville.

To Meade High girls basketball coach Annika O’Connor, the one thing missing in the Mustangs’ two regular-season losses to Old Mill was confidence.

That changed in Monday night’s Class 4A East Region I semifinal game.

The No. 13 Mustangs fought back from an opening 8-0 deficit, rallied from nine points down in the second quarter and never let up as they upset host and No. 10 Old Mill, 66-60, in Millersville.

Meade (20-4 overall) took the lead for good on two Briel Owens free throws with 17 seconds left in the third quarter. Symphonie Bryan-Brown, Jaela Reid and Anjanae Robertson hit 3-pointers within a minute early in the fourth quarter to run the lead 57-48 with 5 minutes, 16 seconds left.

Old Mill, a state finalist last season, cut the lead to 57-54 with a six-point run capped when Mikiyah Mallett, who led the Patriots with 16 points, scored a layup off a loose ball with 3:26 left in regulation.

But the Patriots, who’ve won the last six Anne Arundel County titles, would get no closer.

“We didn’t give up,” O’Connor said. “Even on turnovers, even when things didn’t go our way, missed shots, we didn’t give up and that was the biggest thing. We still kept attacking the rim, we kept going after the ball and that’s what I’m most proud of our girls for.”

Reid, a junior forward-guard, led the third-seeded Mustangs with 22 points while Robertson, who just joined the team last week, added 12. Ayanni Brown scored 11, and Owens had 10.

“For our program this is a big win,” Reid said. “They’re our No. 1 rivals and it’s always a big game and I’m glad we came out on top this time.  I think what gave us the edge this time was pushing through and being able to keep our composure compared to last time and focus on finishing.”

While Old Mill (21-2) had a considerable height advantage, the Mustangs were quicker inside and used their speed to strike in transition as often as possible. They had little trouble breaking the Patriots’ press for layups.

As the tallest Mustang at 5-foot-9, Reid knew her team would have to contain Amani Watts to have a chance at the upset Monday. She also knew she couldn’t do it by herself.

Boxing out the 6-foot freshman, nicknamed “Baby Shaq,” was no easy task for the guard-laden Mustangs. In their last meeting on Jan. 31, Watts finished with 26 points and 27 rebounds in a 61-56 Patriots win.

Monday, the Mustangs held Watts to 11 points and 11 rebounds. She had six offensive rebounds, but managed just two second-chance baskets.

“I loved how we worked together,” Reid said. “I can’t say it was just me because me and my teammates really did pull together and were able to hold her back and keep her from out-rebounding us this time.”

Patriots coach Rick Smith said his team attempted too many 3-pointers instead of pounding the ball inside where they had the advantage. It also didn’t help to shoot 11-for-27 from the free throw line.

“We had our opportunities to keep the lead on them and/or keep it closer,” said Smith, whose team’s 26-game win streak against Anne Arundel foes (including playoffs) was snapped. “They’re a team of spurts and that’s been the way our two games before were with them… [Tonight] they hit their shots and they kept the momentum once they did.”

The Mustangs advance to meet No. 2 and top-seeded Howard in the region final, Wednesday at 6 p.m. The undefeated Lions move to 23-0 with a 62-35 rout of 14th-ranked Arundel in Monday’s other semifinal.

CLASS 4A EAST REGION I SEMIFINAL