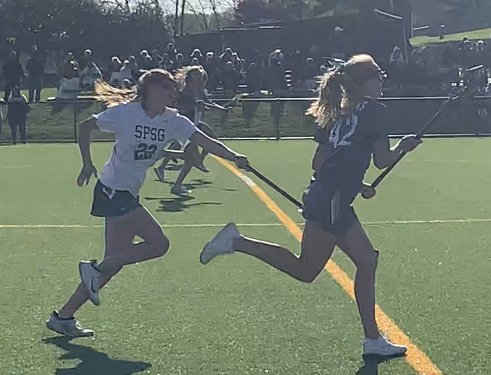 Glenelg Country School attacker Jaclyn Marszal said she had no idea she was rolling up 14 points in the No. 2 Dragons’ Wednesday lacrosse showdown with top-ranked St. Paul’s School.

“If it was there, I just took it and I felt kind of like something came over me. I don’t know. That’s never happened,” the senior said with a big smile.

Not only had Marszal never before scored 14 points in a game, but she picked a great time to contribute those eight goals and six assists. She led a stellar all-around Dragons performance in a stunning 20-7 victory over the defending IAAM A Conference champions.

The victory snapped an 18-game winning streak for St. Paul’s.

“I can’t say enough about this team and their work ethic and how well they work together. It’s just such a close knit team,” said Dragons coach Paige Walton, whose team has won 11 straight games.

If the Dragons can get past No. 19 Garrison Forest School Friday, they will be the top seed for the A Conference tournament which begins next week. Although both St. Paul’s and Glenelg Country would have one conference loss, the Dragons would get the top spot based on the head-to-head win. If the Dragons lose that game, the Gators would be the top seed.

For Marszal and the senior-laden Dragons, the impetus for this victory began a year ago when they led St. Paul’s by five goals with 18 minutes left in the A Conference tournament semifinal only to have the Gators rally to win, 10-9.

“There’s not a day when I didn’t think about that,” Marszal said, “and we learned that our foot always has to be on that gas and the moment you take if off, that’s when they’re going to climb back and … we did not want to feel like that again at all.”

The Dragons never trailed although host St. Paul’s tied the game at 1 and 2 in the first 10 minutes. Marszal then fed Regan Byrne for the first of her five goals, kicking off a six-goal Glenelg Country run. Five of those goals were assisted, mostly from behind the cage, and Marszal had a hand in four of them.

The Gators cut the lead to four three times, including on Lauren Steer’s free-position goal that pulled them within 10-6 at the half.

For a team already reeling from major injuries on defense, the Gators were hurt even more when their leading scorer, junior midfielder Natalie Shurtleff, picked up her second yellow card with 5:58 left in the half, sidelining her for the rest of the game.

The Gators hoped for a big start to the second half but Dragons’ goalie Stephanie Marszal, Jaclyn’s sister, made sure that didn’t happen. The senior made eight saves in the half and allowed just one goal. She finished with 10 saves.

After Jaclyn Marszal assisted Blair Byrne and then Regan Byrne to boost the Dragon’s lead to 12-6 a little over two minutes into the half, Stephanie Marszal stopped back-to-back Gators shots.

Maggie Weisman, Regan Bryrne, Jaclyn Marszal and Arianna Silvestri then strung together four goals before the Gators managed another shot. The Dragons led 16-6, setting off the running clock with 18:52 left in the game.

Stephanie Marszal gave a lot of credit to defenders Neve O’Ferrall, Cydney Lisk, Ashley Dyer and Hannah Glawe for holding the Gators to their lowest offensive output of the season.

“We kind of just knew, since they were down, they were going to try to drive a lot from the top, so it was sending those early slides, looking for the second slide and then just knowing they’re going to shoot it no matter what, they need the goals to win, come back. It was kind of like, you have to be ready for any shot, any time because they’re going to shoot everything,” said Stephanie Marszal, who is a triplet along with Jaclyn and the Dragons’ scorekeeper Jamie.

Both Marszal sisters constantly credited their teammates for making their jobs easier and they were especially complimentary of the Dragons draw control unit.

For the Gators, who got two goals each from Lauren Steer and Cait Gross in their regular-season finale, the loss stung, but there is still time to recover before the tournament starts. Still, they’re trying to replace three injured starters, all of whom were key contributors on defense. 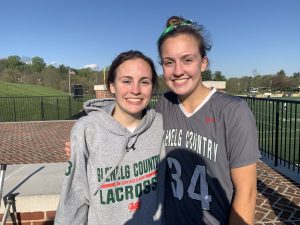 Sisters Steph (left) and Jaclyn Marszal helped Glenelg Country score its biggest win Wednesday. Steph Marszal stopped seven shots in goal and Jaclyn had eight goals and six assists as the Dragons moved into position for the No. 1 seed for the upcoming IAAM A playoffs, as well as the area and nation top-ranking after their rout of St. Paul’s.

Senior Olivia Rose suffered a torn ACL on April 11 and on Friday, her replacement, Grace Schlossberg tore an ACL. At one point Wednesday, veteran Madison Beale played with three freshmen on defense. Having two-way midfielder Kira Balis out with a shoulder injury and losing Shurtleff, another two-way midfielder, to the second yellow card further depleted the Gators defense.

“First of all, no excuses. They were the way better team today,” said St. Paul’s coach Mary Gagnon.

But with so many injuries the Gators didn’t have their usual chemistry and Gagnon said that got to her team at times.

“They saw Natalie go out and they know we’re down starters and we were out of our rhythm,” she said. “We started panicking… and instead of taking our time, we forced some shots. Of course, she’s a good goalie too, so then you can’t really do that, not finishing, and so we just had gut check time. It’s okay. It’s character building, so we’ll be fine. We’ve had a great season. We lost one game and we had injuries.”