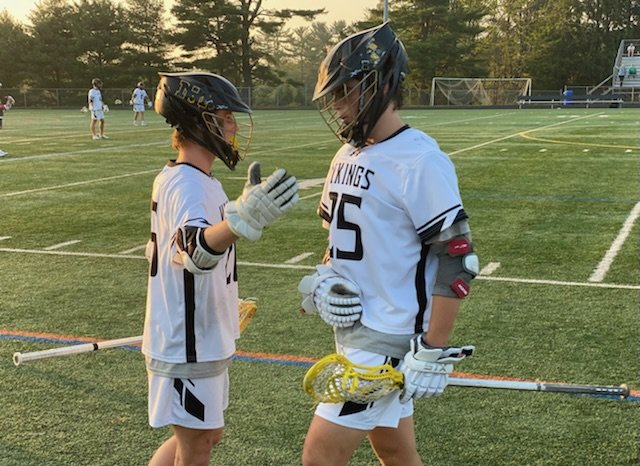 He instead stood a few feet away from the huddle on the track following the 14th-ranked Vikings’ 9-3 victory over No. 18 Glenelg and let his players soak in the moment. Enveloped by a student section that had spilled out of the bleachers following the program securing a piece of the Howard County championship for the first time since 2007, his players had earned the right to celebrate.

“We have been close plenty of times, we just couldn’t get over the hump. There were some really, really good teams the same years we had really, really good teams and it just didn’t break our way,” said McCarthy, who was in his first year as head coach at Hebron the last time the program secured a county title. “This, though, is a special group. It’s 13 seniors that love each other like brothers … they lead by example, they lead by work ethic and they lead by their voice and then we as coaches do our best to put them in position to be successful.

“We were fortunate this year to finally get it done.”

Thanks to smothering defense and a balanced offense, including three goals apiece from Nick Machiran and Maverick Smith, the Vikings proved to be up to the task.

“This means the world honestly,” said Machiran, who is a member of the team’s large senior class. “I have family that went here and it’s been a long time since [Hebron] has won. Too long.”

After Glenelg (10-4, 7-1 Howard) scored first in the opening minutes, Mount Hebron answered with four straight goals over the next 15 minutes of game action to take a 4-1 lead into halftime. Later in the second half, as Glenelg seemed to be gaining momentum with back-to-back goals, the Vikings put together another run that sealed the win.

“Mainly we just had to keep ourselves composed,” Machiran said. “We had plenty of intensity, maybe we even needed to dial it down a tad a couple times in terms of being too aggressive, but it came down to composing ourselves when they scored.”

Glenelg coach Josh Hatmaker said a lack of consistency and some untimely penalties proved costly over the course of the evening for his team.

“We started fast. We were dodging fast and we were spinning our offense, and then all of a sudden we put ourselves in some bad spots that led to turnovers,” Hatmaker said. “We played a hell of a lot of defense today … it felt like we were on defense forever. We just have to value possession better. And then in the second half we got on a roll with those two goals and followed it up with [three or four] penalties in a row. That kills momentum.

“And credit to [Hebron] … they played a full-team game tonight.”

Glenelg got on the board first with Jacob Szczepanski scoring just 70 seconds after the opening face-off. The score stayed that way until Smith found the net for the Vikings with 4:29 left in the first quarter to tie the game.

From there, though, the rest of the first half belonged to the Vikings. Machiran, Smith and Kyle Ratta all scored to create a three-goal advantage. Then the Hebron defense locked things down, including several big stops by goalie Everett Armstead (9 saves).

“Having four seniors in the back, five if you count our pole … they do their job,” McCarthy said. “They listen to our scouts. They are engaged, they are focused and they execute. It’s the perfect combination.”

Out of halftime, Glenelg scored back-to-back with Nick Dalton and Rocco Buscher scoring just under three minutes apart to cut the Hebron lead to one, 4-3, midway through the third quarter.

But the Vikings quickly regrouped, scoring three straight times of their own before the end of the period. Machiran then added two scores in the fourth quarter to put the game away.

Mount Hebron closes the regular season on Friday against Marriotts Ridge. A loss in that contest would create a three-way split of the county championship crown this spring between the Vikings, Gladiators and Mustangs.

But McCarthy said his Vikings have no plans to settle for just a share.

“As a competitor, this is the way you want it,” McCarthy said. “It sets up another big game Friday, which is obviously a rivalry game, but we want the county championship to ourselves. We don’t want anyone else to have a piece of it and that’s what will have us refocused in practice tomorrow.”