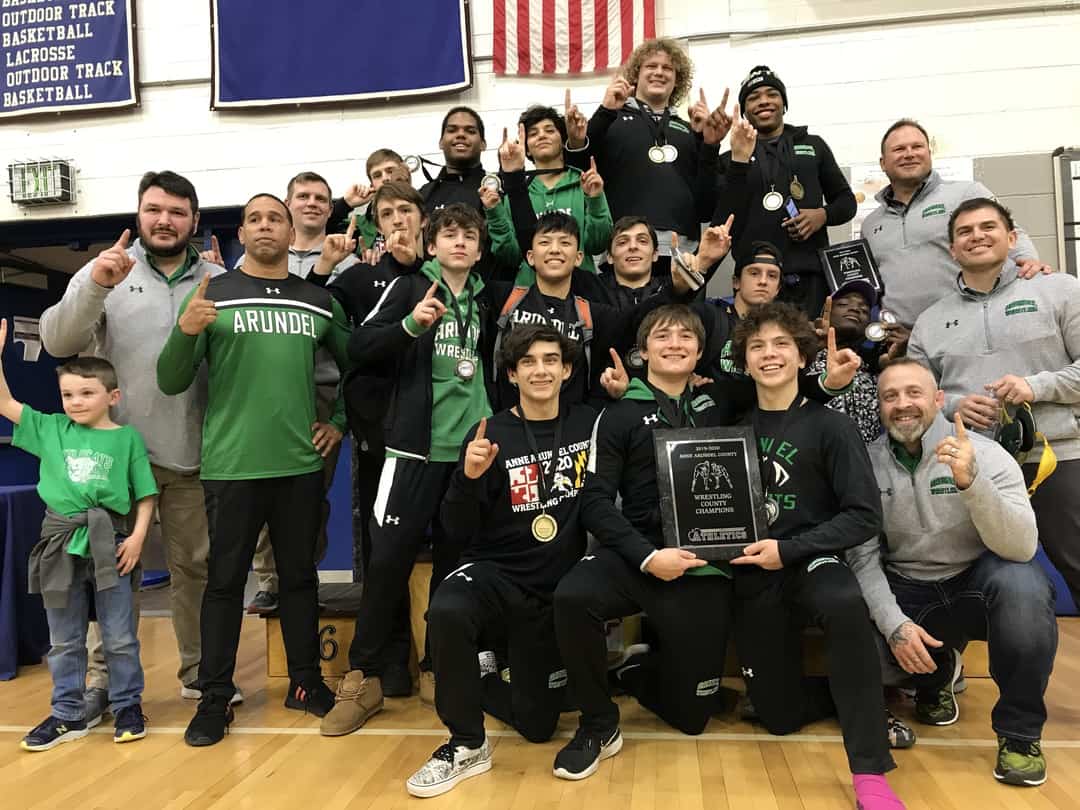 Arundel High might have tied with two other schools with three individual Anne Arundel County wrestling champions, but the damage was done before the final round.

The Wildcats carried an advantage into Saturday’s final round at Annapolis, then went out and won three of their five championship bouts while getting contributions from up and down the lineup in the consolation rounds and secured their first county tournament championship since 1997.

With this year’s championship, Arundel is the first team other than South River or Old Mill to win the county tournament title since Meade won in 2012.

“This is just a great group of kids and they really support each other well,” Arundel coach Dwayne Vogel said. “It just all came together for us.”

Carrying a slim lead over Chesapeake heading to the final round, the Wildcats saw the Cougars earn a pair of titles to cut into the lead. Trevor Gagnon earned the Wildcats’ first title with a pin at 152, then after the Cougars recorded another win, Val Pryor earned a decision as the No. 2 seed at 170 to strengthen the Arundel advantage. Nate Kloss’ victory at 285 came after the Wildcats had already clinched the title.

While Vogel was happy with the three titles—which matched Annapolis and Chesapeake—he pointed to a slew of other wrestlers who either lost early but wrestled their way back for important points, or those who advanced to the final round and settled for second.

In addition to the three first-place finishes, Caleb Chaves finished second at 132 and Clint Mills was second at 182 for Arundel. Jaydon Bowden finished in third at 160 and Angel Borges (113), Sean Quinn (120) and Amir Conwell (220) each finished in fifth for the Wildcats.

“We had some surprises,” Vogel said. “Collectively, as a group, we don’t do it without those surprises.”

On the strength of their three county titles, Chesapeake and Annapolis finished second and third, respectively. Chase Listorti (126) and Victor Listorti (160) each won by fall and Dean Laumann (145) won by decision for Chesapeake. Owen Schmidt (138) and D.J. Hoover (170) each finished in second for the Cougars, who tied with Arundel with five wrestlers in the finals.

Severna Park’s Ty Broadway (220) remained unbeaten win a pin, while Carson Gottimer won by decision at 182 for the Falcons, who were the other school with multiple winners.

Those who qualified move on to their respective region tournaments this weekend with hopes of qualifying for the state tournament on March 5-7.