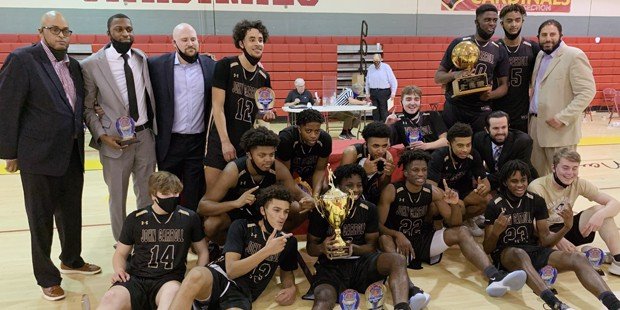 Jalen Bryant was a freshman on John Carroll School’s junior varsity basketball team in 2017-18. He watched Immanuel Quickley and Montez Mathis lead the Patriots to the MIAA A Conference championship.

Quickley, a McDonald All-American and eventual SEC Player of the Year at the University of Kentucky and NBA first-round draft pick, and Mathis, who helped Rutgers to its first NCAA Tournament since 1991, graduated. Coach John Tito resigned, a couple of players transferred and John Carroll, one of the area’s best the past decade, was in transition.

But Bryant “trust the process.”

In a season like no other, John Carroll completed the greatest run in BCL Tournament history. The sixth-seeded Patriots, who went 3-4 in a shortened regular season due to the COVID-19 pandemic, defeated the top three seeds to claim possession of the Brother D. John Smith Trophy.

John Carroll, which claimed its third BCL tourney crown, is the first No. 6 seed since Towson Catholic in 1989 to go the distance.

The Patriots’ run is befitting of “March Madness,” but they aren’t a “Cinderella.”

“We believed in who we were,” said Patriots coach Seth Goldberg. “We believed we belong there.”

“We knew we were going to prove everybody wrong,” said Commander.

With 10 returning players, John Carroll was one of the most experienced teams heading into the MIAA A Conference/BCL season – a season that didn’t officially commence until Feb. 8 with preseason workouts (games started Feb. 17).

The Patriots had to adjust because of a couple of injuries. After a 2-5 start, John Carroll settled in.

Monday, the Patriots built a 26-point lead at third-seeded Mount St. Joseph, which hadn’t loss a quarterfinal game since 1999. Wednesday, John Carroll rallied from a 14-point deficit to eliminate Archbishop Spalding, the No. 2 seed.

The degree of difficulty Friday was much higher against St. Frances (15-1), chasing a fourth straight BCL Tourney title. The undefeated Panthers won all their decisions by double-digits including an 82-64 decision over the Patriots in East Baltimore last month.

It didn’t matter to John Carroll.

“We put in the work in at practice, so the game is easy,” said Bryant. “We just have fun.”

“Things weren’t going our way, we had some ups-and-downs,” said Basima. “We handled it and found our energy. Today, we’re champs.”

Basima, who fouled out in Wednesday’s semifinals, was unstoppable for most of Friday’s 36-minute championship battle, slashing his way through and around St. Frances’ defense. The 6-foot-4 forward joined former St. Frances guard Adrian “Ace” Baldwin and BCL icons Mark Karcher (St. Frances) and Rodney Monroe (St. Maria Goretti) as the only sophomores to win BCL Tourney MVP honors.

Ireland, who scored a team-high 20 points, brought the Panthers to 62-59 off a drive with 67 seconds remaining in regulation. After St. Frances regained possession with 15 seconds left, Ireland drained a fadeaway 3-pointer as time expired to force the second overtime in BCL Tournament finals history.

It still didn’t matter to the Patriots, who led for nearly the final 14 minutes of regulation.

“We control what we can control and that was a perfect example,” said Goldberg. “They (St. Frances) hit a great shot, they put it into overtime and as we said to the guys ‘we get to spend four minutes together.’ It’s what it been about all season – being together and having fun.”

The first BCL tourney final overtime since the 2014 Calvert Hall/Mount St. Joseph game at UMBC Field House, considered the greatest game in BCL history, was less than memorable. The teams combined for six missed shots and a turnover to start the overtime.

Commander got a hand on St. Frances’ Jahnathan Lamothe’s 3-pointer and Bryant was fouled with 58.3 seconds left in OT. He converted the tail end of the double-bonus free throws, giving John Carroll the lead.

Bryant came out with the rebound after a Panther miss with about with 45 seconds remaining. Commander missed a 3-pointer with 20 seconds to play, but got the ball and was fouled with 9.9 seconds after Tchlimbo got a piece of Ireland’s attempt at the glass.

Commander got the first free throw to bounce in, then missed the second. The ball hit back the iron and caromed left towards the sidelines, where Commander got to it and John Carroll immediately called timeout with 7.3 seconds left to play.

Basima was fouled with 5.7 seconds remaining. He converted both free throws, capping a week he scored 58 points.

“It was a team effort,” said Basima. “They (teammates) kept pushing me and that’s why we came out with the W.”

“He’s a special kid, and we needed him to be tough,” said Goldberg. “None of it surprised me, not one bit of it.”

When the buzzer sounded, John Carroll players stormed the court in celebration. Basima danced with his teammates huddled around him on the Patriots’ sidelines.

There was silence on St. Frances’ sideline. After a run through the BCL regular season, the East Chase Street school was in-line to become the first team in five decades to win four straight BCL Tournament titles. The Panthers appeared settled at halftime Friday (led 32-27) after trailing by nine points early.

In the end, St. Frances’ seat in history was snatched.

“This is the first time we dealt with some adversity and we fought back. We didn’t score into overtime,” said Panthers coach Nick Myles. “John Carroll made shots…62 points is the least we scored all year. We couldn’t put the ball in the rim.”

Since arriving from St. Paul’s School, Goldberg has stressed a culture that succeeds wins and losses. He remembers sitting down with Bryant three years ago before a 5-24 campaign.

“Every kid that has come in door and every kid that stayed, we all said the same thing, it’s about what we care about and value,” said Goldberg, whose team finished with nine straight victories. “Our goal is to build young men into leaders.

When we look at it where we took the program from, not the wins and losses, we were building something brand new. It’s great to see the rewards for the guys. It’s amazing.”