The save of her life 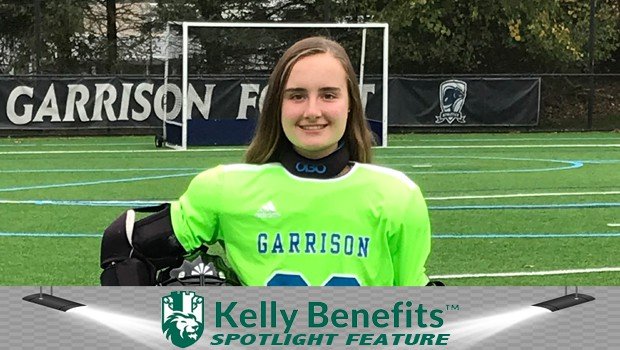 Field hockey was the bright light that kept Garrison Forest’s Alyssa Klebasko going during her childhood fight with lymphocytic leukemia, the same disease which put her on the path to becoming one of the nation’s top goalkeepers

Since she was a little girl, Alyssa Klebasko has never wanted anything to interfere with field hockey practice.

Garrison Forest’s standout junior goalie savors the practices that push the No. 2 Grizzlies toward what they hope will be another IAAM A Conference championship. Ten years ago, however, going to field hockey practice had little to do with winning games.

Six-year-old Alyssa Klebasko listens to advice from Kim Schmelzinger, her field hockey coach in the Gambrils-Odenton Recreation Council. Schmelzinger suggested that Klebasko play in the goal and she never left, eventually starting as a freshman at Garrison Forest and earning a berth on the U.S. U-16 Women’s National Team. (Photo courtesy of Gretchen Klebasko)

Getting on the field gave Klebasko something to look forward to during three years of chemotherapy treatments for leukemia.

She had already played field hockey for a year when she was diagnosed with acute lymphocytic leukemia at 6 years old. Recurring fevers and frequent leg pain indicated something was wrong and she was diagnosed very early with the most common type of childhood cancer, one that has a 90 percent cure rate, according to the St. Jude Children’s Research Hospital website.

Treated at Johns Hopkins Hospital, Klebasko took chemotherapy through drips, pills and spinal taps. She doesn’t remember much about those days, but she does remember being determined to play.

“I actually remember [the spinal taps] because I did them awake. I chose to do them awake at 7 years old, so I could go to practice. I just remember laying on the bed for hours and not being able to move,” she said, adding that she was numbed so she didn’t feel the tap.

She was so weakened by the treatments that she didn’t have the energy to run up and down the field, so her coach at the Gambrills-Odenton Recreation Council, Kim Schmelzinger, put her in the goal — a decision that would later lead Klebasko to a spot on the U.S. U-16 Women’s National Team and a commitment to play for her dream school, the University of Maryland.

Schmelzinger, a breast cancer survivor, understood what playing meant to Klebasko even as such a young child.

“When Alyssa was diagnosed it was absolutely devastating to all of us who knew her,” Schmelzinger said. “She was this adorable little peanut of a girl who always played her heart out and just the thought of her having to go through this horrible set of treatments without any sort of an outlet and being around her friends and just having that distraction seemed terrible.”

When her parents and the doctors said she could keep playing, she gave it all she had, but she often didn’t feel well. She had little stamina, but, at that age, she didn’t need much to play in the goal.

“She got in there and it was awesome,” Schmelzinger said. “She just took to it and she started kicking the ball and throwing herself in front of things like she does now. We were a little bit worried, like is it okay she’s doing this with so much fervor and passion, but she made it work.”

At times, Klebasko was so sick, her mother Gretchen Klebasko said, that she had to hang onto the side of the goal, but when the play approached her, she would jump into the action and then hang on again as the ball moved away from her. In games, she sometimes didn’t even make it through a half, but she was always there.

Except for one season when doctors insisted she sit out, because, her mother said, her blood counts and platelets were so low that it would have been dangerous to get hit with the ball, her parents stifled their fears and allowed her the outlet she needed. Even then she was allowed to play soccer.

Alyssa Klebasko started playing in the goal when she was 6 after chemotherapy treatment for leukemia weakened her too much to run up and down the field. She loved it right away: “I just think it’s the competitiveness inside of me coming out. I love when someone has a breakaway and I take it away from them. I love to stop goals that are about to go in. The thrill of a save to me is what keeps me going.”

“Alyssa lives and breathes sports, especially field hockey,” Gretchen Klebasko said. “It is her. It’s part of her personality. It’s part of her character and there was never a moment she said, ‘I think maybe I should rest.’”

As a pediatric cancer survivor, Klebasko is especially fond of Garrison Forest’s annual Play4The Cure Game which the Grizzlies will host Thursday at 4 p.m. against No. 3 Bryn Mawr.

While many fall teams sponsor Pink Outs or other events geared toward Breast Cancer Awareness month in October, Garrison aligns with the National Foundation for Cancer Research’s fundraising program to support all cancers.

“I love that we do that game every year to raise money for cancer but also to raise awareness,” Klebasko said. “It affects so many people’s lives each year and even if our small donation could help one person, it’s totally worth it.”

At 16, Klebasko’s cancer is unlikely to return. She only needs a check-up once a year to be sure.

Now she’s thriving, especially on that one happily unexpected twist from her illness. Had she not been sick and so weak, she might never have become a goalie.

“Ever since the first time I put the gear on, I fell in love and I’ve never looked back,” she said.

Rated one of the Top 50 players in the nation in the Class of 2023 by MAX Field Hockey, she has been one of the Baltimore area’s top goalies since her freshman year when she helped the Grizzlies win the A Conference championship. She also plays with eight of her Grizzlies teammates in the Freedom HKY club.

Garrison Forest coach Malcolm Belin remembers his first impression of Klebasko being that she was shorter than he expected, 5-feet-4. She erased that thought as soon as he saw her in action. As a freshman, she had no trouble communicating with and leading older field players, a key asset for a team’s defensive quarterback.

Even then, Belin had every confidence in her ability to make the big plays.

“I think a lot of times you see that they put the pads on and they feel safe and all that kind of stuff but they don’t really have that aggressive nature about being a goalie and she has it. It really, really is easy to tell that every ball that gets past her annoys her … even some that she has no way of saving, she still looks back at the ball in the goal and just hates it,” he said.

After having no season in 2020, the Grizzlies (8-4) have played a tough schedule this fall with losses coming to No. 1 Severna Park, 2-1 in overtime and to some of the top teams in Pennsylvania and New Jersey at the MAX Field Hockey National Invitational last month where Klebsko made the All-Tournament Team.

Thursday’s game with Bryn Mawr features the only two teams unbeaten in the A Conference. The Grizzlies are 6-0. The Mawrtians are 5-0 and 11-0 overall. Both teams have been very stingy with the Grizzlies allowing just three goals in conference play and the Mawrtians, only one all season.

Like Belin, Klebasko’s teammates have confidence in her to save them.

Teammate Dani Mendez said Klebasko makes too many big plays for her to pick one, but that she’s always inspired by her high school, club and U.S. U-16 teammate.

“She’s been an inspiration to me and, I know, to many other different athletes,” said Mendez, a senior. “Even when she was sick, she always wanted to play. She had a passion to play. She was a fighter, she still is and she perseveres and she has a positive attitude. She’s a great teammate and a great leader.”

Klebasko, who has been invited to try out for the U.S. RISE National Team, the U-19 team, in January along with Mendez, said she strives now just to get better at all aspects of goalkeeping, so that she can excel in college and eventually make it to the Olympics.

Surviving leukemia has certainly shaped Klebasko on and off the field. She’s as resilient in life as she is in the goal. Small battles aren’t important when you’ve spent years fighting for your life.

“I think it’s made me stronger and a braver person today and it makes me realize what’s important in life and to never take it for granted,” she said.

At Maryland, Klebasko plans to study biology to prepare for a career in the medical field. She’s not sure exactly what she wants to do, but she’s been drawn to medicine for a while.

“So many people in the medical field influenced my life especially when I was younger. Some of the doctors are the reason I’m still here today, so if I can give back and help other sick kids, that would be amazing.”

Pictured above: Garrison Forest junior goalie Alyssa Klebasko, a pediatric cancer survivor, committed to play field hockey at Maryland where she will study biology. She plans a career in the medical field after being inspired by the doctors, nurses and others who saved her life.