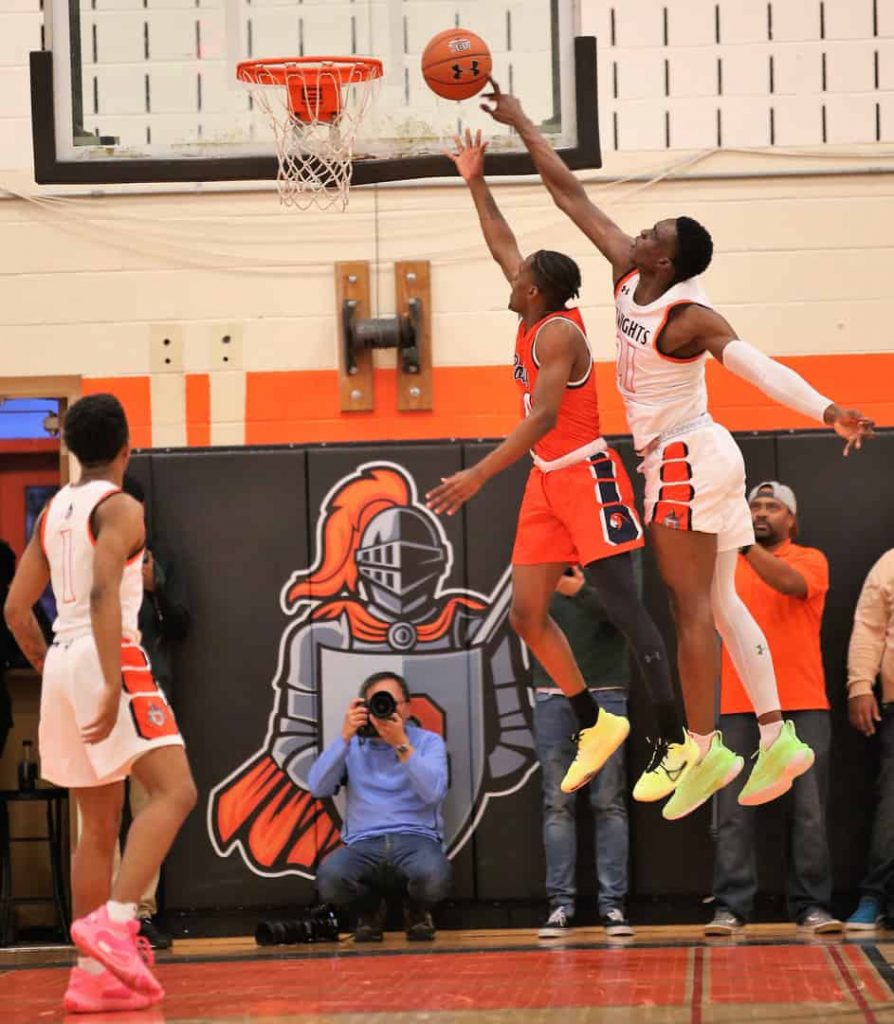 City’s Clarence Obiajulu (right) gets a piece of Poly’s Rahim Ali’s layup attempt during the first half of Monday’s Baltimore City boys basketball contest. The third-ranked Engineers got off to a 24-5 start en route to a 77-69 victory over the No. 5 Knights in Northeast Baltimore. (photo – Jimmy Fields Sr.)

The referee lofted the basketball up for the opening tip and Justin Lewis’ right hand tapped it over to Rahim Ali.

Ali bounced the ball and sent it to the basket where Brandon Murray went up and put the ball through for an alley-oop dunk.

It was the perfect opening statement for Poly High Monday against City College. And for Murray, it was the start of the best individual performances of the season.

The senior shooting guard finished with 44 points as the third-ranked Engineers defeated the host and No. 5 Knights, 77-69, in a Baltimore City contest in front of a packed gym in Northeast Baltimore. Bryce Lindsay added 11 points for the Engineers (17-2 overall).

The Cold Spring Lane school showed why it’s the best team in Charm City, leading by 19 points in the first quarter. Poly, which clinched first in the city league’s B Division will face fourth-ranked Lake Clifton, the A Division first-place team, Feb. 25 at Morgan State University’s Hill Field House for the city championship.

Against their centuries-old rival, the Engineers wanted to make a statement in their first challenge since a loss to St. Frances Academy at Hill Field House nearly two weeks ago, costing them the area’s No. 1 ranking.

“I thought our execution was at a different place then it was last weekend,” said Brand, referring to the 57-53 loss to the reigning MIAA A Conference and Baltimore Catholic League champion St. Frances. “We’ve locked in on a few things and how we do them and the way we executed them early today was the key.”

“We knew we had to battle back after the loss to St. Frances, going hard everyday in practice,” said Murray. “We know the outcome is going to be outcome.”

The end result Monday for Murray: 18 of 21 from the field, seven of eight on 3-pointers. He had 30 points in the opening half.

“The Castle on the Hill,” belonged to Murray.

The Engineers, who Brand said “were stagnant,” against St. Frances, were anything but Monday. Poly hit 10 3-pointers, set up by efficient ball movement and was engaged defensively.

But Murray, who went for 16 points in the opening half, went off again for Poly. He answered Carrington’s trifecta with one of his own and accounted for Poly’s next 12 points. The Engineers led 43-23 late in the first half after Murray deposited his fourth dunk.

His fifth and final dunk capped a highlight reel-like play where he blocked Carrington’s attempt from the perimeter, chased the ball down and finished with a ferocious one-handed slam early in the third. Murray scored 41 points through three quarters.

“Brandon Murray is a special talent. I’ve been saying it for awhile and people are seeing it now,” said Brand. “He scores in bunches, plays the right way and he doesn’t take bad shots or play outside of his game and he showed that tonight. I know it sounds crazy because he was hot, but it’s really the way we see him play every day.”
“That’s a bad man,” said Ali, Poly’s senior point guard. “He doesn’t forced it. You would think somebody who scores 44 points would look off a teammate off, but he’s unselfish.”
Carrington, a senior, finished with 25 points for City, which closed to 74-65 with 1:45 left in regulation. The Knights had two chances to draw closer, but an off-balanced missed shot and an interception steal by Poly’s Justin Lewis, ended their comeback hopes.
“If you heard me screaming at the end just now telling them how we finish matters — it definitely matters,” said City coach Omarr Smith. “We’ll see them again. To their credit, they came out shooting the [heck] out of the basketball. But for my guys to fight back and play to the end — that’s what it’s all about and I’m proud of them.”
The Knights will likely meet Poly in the Class 3A North Region section final next month. Monday was closest city league match of the season for the Engineers, who won their first 10 decisions by an average of 48 points.

Brandon Murray was nearly unstoppable for Poly Monday. The senior shooting guard scored 44 points, including seven 3-pointers and shot 18-of-21 from the field. (photo – SportsMajors)

Poly plays Forest Park Friday followed with a matchup Saturday with nationally-ranked IMG Academy from Florida in the inaugural East Coast Bump mixer at UMBC. The Engineers, who’ve won three straight Class 3A state titles, garnered their first national rankings several weeks ago only to relinquish it after falling to St. Frances.