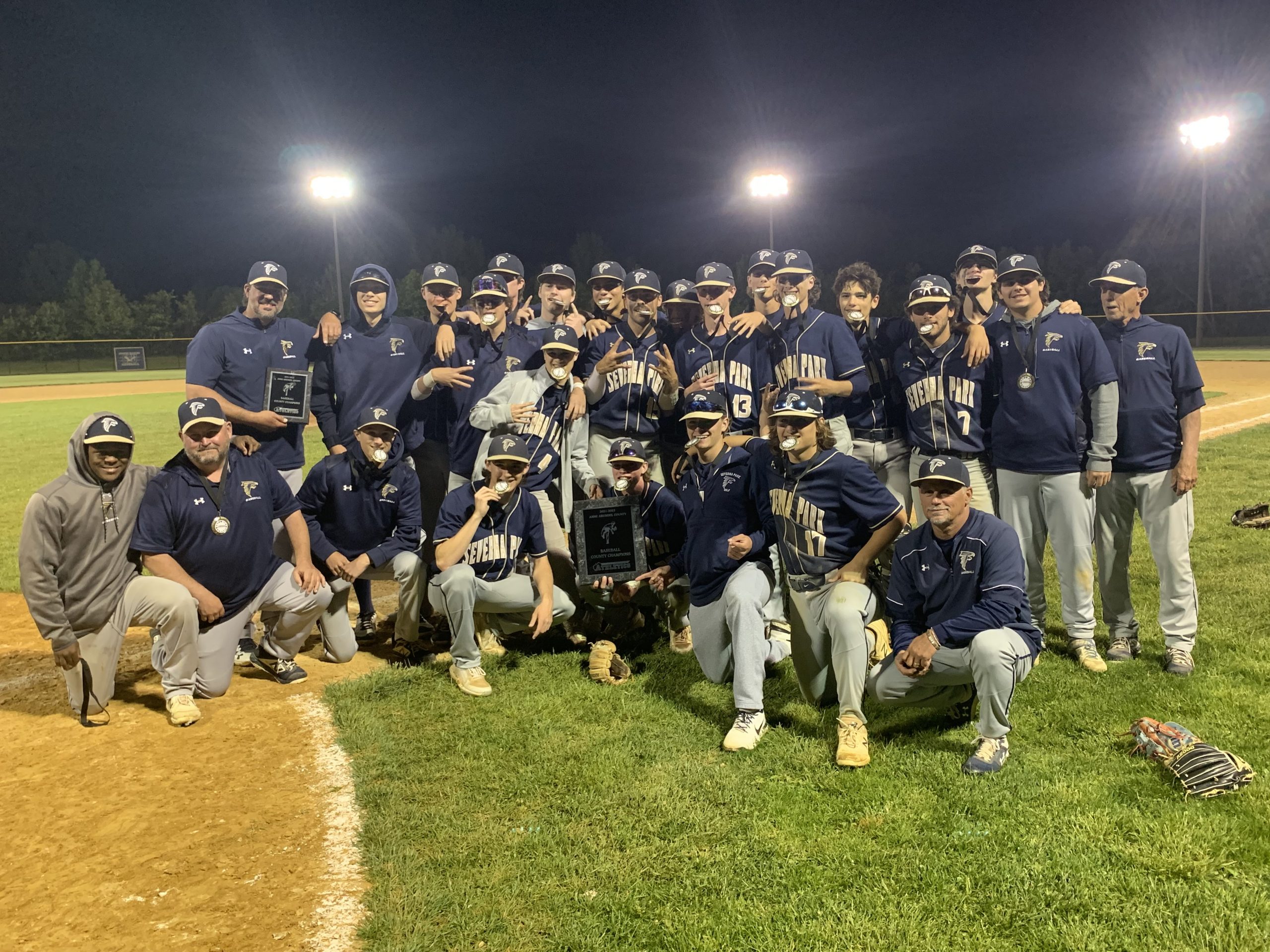 Senior lefty Colton Adams was on his game against Arundel High a second time this season, and his Severna Park mates pecked away at four Wildcat pitchers to post a 12-7 victory in the Anne Arundel County championship game Tuesday night at George F. Bachman Park in Glen Burnie. It’s the second straight county crown for the Falcons.

It’s the second straight league crown for Severna Park (12-2-1 overall), which went undefeated to cop the 2021 county title. There was no county final last year and the teams did not play in 2020 because of the Covid-19 pandemic.

Last night’s championship game started nearly an hour and a half from the original starting time of 7 p.m. due to the junior varsity championship between the same two teams. First pitch for varsity game was at 8:21 p.m. and the final out was recorded a little after 11 p.m.

Adams, who dealt Arundel a 3-2 loss back on April 1st, shutdown the Wildcats again in the county championship game through five innings as his mates built him a 9-3 lead. Adams yielded a first inning run and gave up two more in his final inning on 82 pitches overall, just four hits, three walks and struck out 8.

Righthanders Nathan Clarke and Sean Williams followed Adams pitching the sixth and seventh innings and gave up two runs each to close the scoring. Designated hitter Nellie Grajales-Vazquez led Arundel of coach Franklin Hood with two hits, including a double and two RBIS.

The Falcons scored runs at least two runs in each of the first five innings and rallied for the last three runs in their final at-bat and in a rarity, every Falcon starter had at least one run scored and all but two of their batters had at least one base knock. Those two, the number 7 and 8 hitters in the lineup in Jimmy Miller and Ethan Rodriguez contributed with an RBI each. 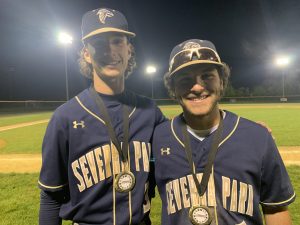 Colton Adams (left) got the win on the mound and Luke Herz was part of a balanced offensive effort as No. 2 Severna Park won its second straight Anne Arundel County baseball title Tuesday evening at Bachman Park in Glen Burnie. The Falcons begin their pursuit of the Class 4A state championship Monday in the East Region I semifinals.

Severna Park does not have their usual powerful lineup with the bat this season, but rather has a lineup that gets it done. They know how to win and get whatever they need to do so. And with their defense and pitching is ready at the right time – winning the county championship and ready for the looming state playoffs.

The Falcons were Class 4A state runner-up last season dropping a heartbreaker to Montgomery County’s Sherwood at Regency Stadium in Waldorf and finishing 19-1 overall.

“From the start of the year to where we are now, there has been so much improvement,” said Severna Park 10th-year coach Eric Milton, whose team earned a first round bye and will open in the playoffs at home in the East Region I semis against the Thursday winner of South River and Annapolis.

“That’s the thing, we are balanced. I don’t care if bases loaded, I’ll take my No. 9 hitter or I’ll take my No. 2 hitter, who cares. We are pretty balanced throughout the lineup. We were not this team a month ago. We’re a totally different team and playing good at the right time.”

The kind of team they are now showed Tuesday night as they kept at the Wildcat hurlers in starter Gary Gubbings III, Garrett Kuhn, Kyle Wortz and Caden Houck. Leadoff batter and second baseman Cody Phillips had two hits, including a two-bagger and two RBIS while Seamus Patenaude was 3-for-5 with two runs scored and an RBI.

Arundel, one of only a few teams in Maryland that wears stirrups with the white sanitary sox showing, made popular by late former Wildcat coach Bernie Walter (won Maryland record of 10 state titles), had won 12 games in a row coming into the coming into the county finale.

A possible third meeting between the Wildcats and Falcons looms in the regional playoffs.

2B: SP – Cody Phillips and Luke Herz; A – Nelson Grajales-Vazquez and Gubbings III