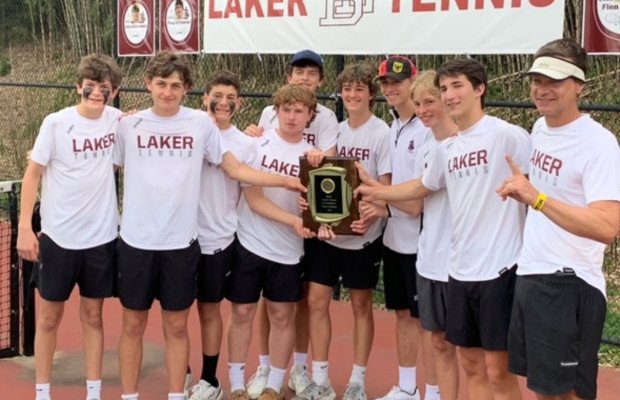 With the title hanging in the balance, Boys’ Latin sophomore James London found a way to prevail against Park’s Noah Bender on Thursday in the pivotal match of the MIAA B Conference tennis championship match.

Bender did not yield easily in the No. 2 singles match, which made London’s comeback more special.

The Bruin standout took the first set before Londan earned the final two sets in a 5-7, 6-4, 6-4 triumph that gave the Lakers a 3-2 victory and their first-ever tennis crown.

“The last games of the third (set) were played with the championship resting on his shoulders — and a big crowd looking on,” BL coach Rich Zielaskiewicz said. “James demonstrated tremendous grit in overcoming these pressure-packed moments to prevail, 6-4, in the third. After the last point, teammates and other students stormed the court to celebrate.”

The defending champs had their share of big moments as well, beginning with Josh Solomon’s dominating 6-1, 6-2, win over BL senior captain Paul O’Connor and No. 2 doubles tandem of Fyn Gaither and Ethan Elbert topping the Laker freshmen duo of Evan Rosen and Charlie London, 2-6, 6-2, 6-2.

Boys’ Latin answered in kind when freshman Eli Holder handled Danny Field, 6-0, 6-2, and seniors Finn Hopkins and Markus Engel did the same in the No. 1 doubles, 6-2, 6-2.

Engel and Hopkins used strong net play to finish the season with an unbeaten record in regular season and playoffs.

“This was a special doubles pair – working together beautifully as a unit and helping to lead the team with their fire and confidence,” Zielaskiewicz said.

He added some kind words about Holder as well.

“With a unique combination of talent, work ethic, and character, Eli is a treasure and a coach’s dream player. Moving forward, he will play a vital role in the program for the next three years.”

By and large, the leadership displayed by O’Connor, Engel, and Hopkins was key for a team with such youth dotting the roster.

“Each captain had his own unique way of setting the example and inspiring the younger guys,” Zielaskiewicz said. “We sharpened our blade with challenging preseason matches vs some of the best A Conference schools. From a coaching standpoint, the emphasis was on the mental game, advanced training drills, fitness, and camaraderie. Everything we accomplished was predicated on the deep bonds shared between the guys and their willingness to put in the work. I’m so happy for them.”