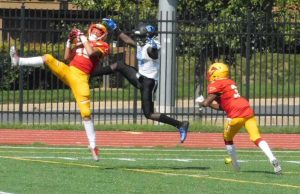 Calvert Hall’s Tre Jordan (left) comes down with an interception during Monday’s football game with St. Vincent Pallotti. Jordan finished two interceptions as the No. 7 Cardinals won 37-7 over the Panthers at Russo Stadium in Towson.

After his team’s match was stopped Friday because of weather, Calvert Hall College football coach Donald Davis wanted the Cardinals to start fast for Monday’s completion.

No. 7 Calvert Hall posted a 37-7 non-league decision over the Panthers at Russo Stadium in Towson. Junior running back Sean Tucker rushed for 147 yards and three touchdowns, and Keith Powers and Cobie Floyd each added a score.

Leading 10-0 in the second quarter Friday evening when heavy rain and lightning forced stoppage in play, the MIAA A Conference squad scored four touchdowns in the third quarter to start a running clock.

The Cardinals are off to a 2-0 start for the third straight season.

“I knew we had to come out banging hard with the nice weather,” said Calvert Hall junior center Ryan Swartz, who had trouble gripping the ball in the second quarter as heavy rain fell Friday. “The wait didn’t affect us. We knew what we had to do and got it done.”

Under dry and sultry conditions late Monday morning, Tucker broke off scoring runs of 66- and 24-yards in the third quarter. Powers, a junior defensive end, returned a fumble for another score. Floyd’s one-yard touchdown run made it 36-0 and started the running clock.

Keyshawn Wheeler got Pallotti on the scoreboard in the fourth quarter with a one-yard run.