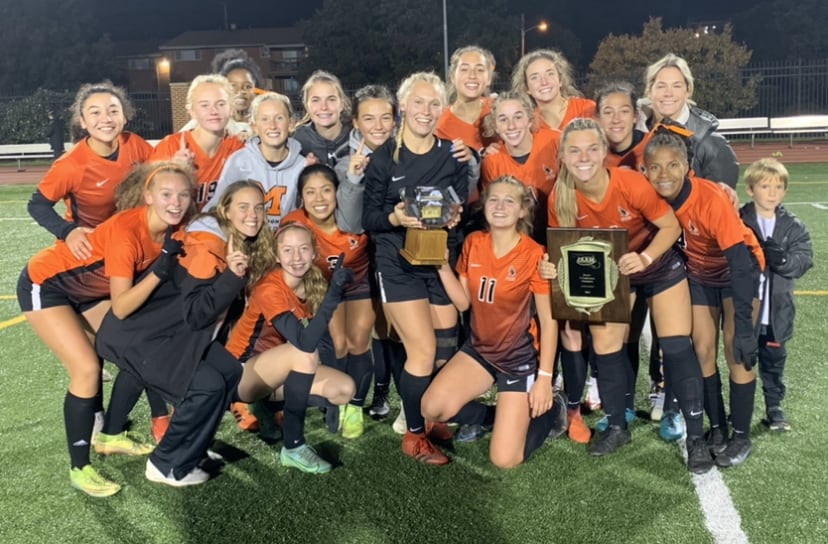 Like many of her new teammates, Ada Morris spent the season finding a role with McDonogh School’s girls soccer.

Smith’s goal with 5 minutes, 5 seconds left in the extra session was the “golden ticket” for McDonogh (13-2 overall), which claimed its fourth straight A Conference title, and seventh in the last eight full seasons.

The Eagles, who did not play in 2020 because of the COVID-19 pandemic, returned three starters from 2019. Their 2021 roster featured 11 freshman and sophomores.

The more things change, the more they stay the same.

“They [returning players] talked a lot about the legacy of the program and wanting to keep the tradition alive,” said Eagles coach Harry Canellakis. “We got some good younger players for sure.”

Golden Girl: Ada Morris was the hero for McDonogh girls soccer Saturday night. Her goal, five minutes into the extra session, lifted the top-ranked Eagles to their fourth straight IAAM A Conference championship.

Enter Morris, a sophomore midfielder. She finished Kelsey Smith’s pass off the right side, knocking the ball in from in front of the goal.

Morris, who was mobbed by teammates, and classmates who stormed the turf after her goal, was in awe.

“She was one of the only kids that was pressing hard,” said Canellakis. “You could see she was in it so we kept her on.”

After beating Spalding (11-5), 3-0, during the regular season, McDonogh needed every ounce of effort to deny the Cavaliers Saturday. The Severn school, seeking its first league title since 2o16, had the better of play for most of the first half.

In the 44th minute, Gabby Wisbeck’s free kick landed in front for a few seconds before a McDonogh defender was able to clear. In the 72nd minute, Smith laced a shot that caromed off the post.

Smith, the Eagles’ best offensive threat, worked around a Spalding defender on the right side. She released a shot to the far post where Morris got her thigh on the ball for the “golden goal.”

“Going into overtime, we knew we deserved it and this is what we wanted…we played with heart and gave everything we got,” said Smith, who’s committed to the University of Maryland. “I think that’s what matters.”

Despite losing to McDonogh for the third straight final, Spalding coach Ashly Kennedy lauded her team’s effort Saturday. The Cavaliers graduated 12 seniors from a condensed 2020 season.

“There was a lot of unknowns…lot of adjustments,” said Kennedy. “I think we definitely had some setbacks during the season, but it only made us better and stronger and more prepared for this.”

McDonogh arguably never faced more questions entering a season than in 2021. The Eagles weren’t No. 1 in preseason polls and lost their first two scrimmages.

“We sorted things out..the fact we were able to grow so much during the season makes this very very special,” Canellakis said.

“I know our seniors were stressed out because we have almost a completely new team.” said Morris. “Our first couple of games we were wobbly but then we got it together. We gained so much confidence quickly, we were able to pull through.”