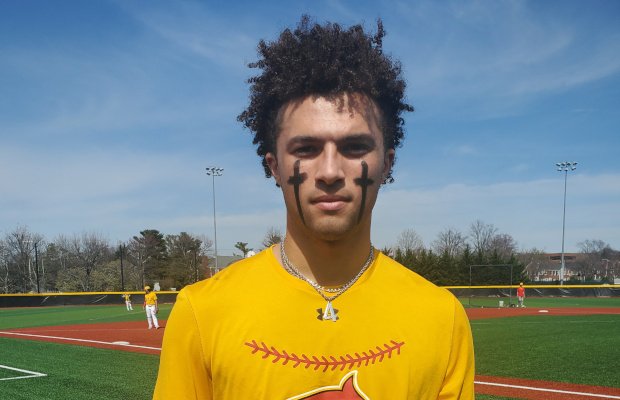 2022 VSN BASEBALL PLAYER OF THE YEAR

Recently retired Calvert Hall College baseball coach Lou Eckerl said Lamar King is “the best pro prospect we have ever had to come out of Calvert Hall.”

That’s quite a statement considering that Eckerl is the winningiest coach in Calvert Hall history. Arguably, the Cardinals have produced more great players than any other school in the Baltimore metro area, many of those players who have gone on to play professionally.

No doubt, the Towson private school has had more than its share of “pro prospects” and to say that the recently graduated King is the best of them all, is quite a compliment. The catcher is Varsity Sports Network’s Player of the Year ;ffffffEckerl’s claim should be supported with Major League Baseball’s amateur draft happening next month (July 17).

“Lamar is the best defensive catcher we have ever had and this year he put up incredible offensive numbers,” said Eckerl. ”Lamar was an absolute pleasure to coach.”

The 6-foot-4, 215 pound King is a physical and athletic backstop who is fundamentally sound blocking pitches and possesses a strong arm with a quick release that enabled him to cut down would-be base stealers 70 to 75 percent of the time.

King also is beyond his age and experience in handling a pitching staff.

A four-year varsity player, King had only two home runs last spring, but erupted with the bat his senior year after working really hard to improve his swing and leverage and using his body to the maximum.

King also credits ex-pro baseball player, Justin Maxwell for helping him with his hitting and bringing things together. Maxwell’s tips ”brought my hitting a long way since he started working with me,” according to King, who like the rest of the players missed out on the 2020 season because of the COVID-19 lockdown.

Calvert Hall was defending MIAA A Conference champions after King’s freshman season of 2019. He belted two homers in 2021 as the fulltime catcher.

With 14 homers, nine doubles, 38 RBIs and 22 runs scored on a .506 batting clip, King led the Redbirds to another 20-win season and MIAA A title contention. His home run total was two shy of the school record 16 set in 2011 by Matt Bosse, a member of the VSN All-Decade Team.

King, who has a baseball scholarship to Division I perennial power Georgia Tech University, is projected to go in the first three rounds in next month’s MLB draft

“That’s all I have been hearing about Lamar that he will likely go in the first three rounds,“ said Philadelphia Phillies East Coast and Mid-Atlantic area scout Dean Albany. “He’s a big strong kid and I can’t think of anyone better in the area. He turned down MLB pro combine, but that’s not going to hurt him. Everybody knows who he is and what he can do.”

King, who’s represented by Rick Oliver, a former Patapsco High and Leone’s-Johnny’s standout third baseman who played in the Milwaukee Brewers’ system, has the right demeanor and make-up.

He is focused on the game he loves, winning and being successful. He hopes to follow in his dad’s footsteps, although in a different sport. King is hoping to play major league baseball like his idols Aaron Judge and Mike Trout.

His dad, Lamar King Sr., reached the highest level of professional football. The elder King starred at Chesapeake-Baltimore County and Saginaw Valley State, emerging into a NFL first round pick for the Seattle Seahawks.

“I never got to see my dad play because I was a baby and he retired after the 2005 season,” said King, Jr. ”I’ve of course seen him on film. He played a little baseball in high school but concentrated on football and made it. I played a little football and basketball earlier, but being a catcher is what I have always wanted to be.

My dad knows what I’m going through with baseball and tells me to trust the process. I feel like I have been well prepared for the situation having attended Calvert Hall. There are so many good people there. And the Calvert Hall environment and atmosphere is so valuable. It seems like everyone there wants you to succeed at whatever you pursue.”

Eckerl said King was “a special player” and proved it everyday.

”Lamar left every practice or game with a handshake for each of our coaches for their help and knowledge they gave him,” said Eckerl.