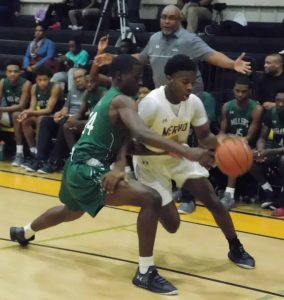 Mervo’s Dante’ Miller tries to drive past Milford Mill’s Skylar Baker during the second half of Saturday’s boys basketball match at the Baltimore Hoops Festival at St. Frances Academy. The Mustangs defeated the Millers, 70-57.

After playing against the nation’s No. 1 post player, St. Frances Academy boys basketball team weren’t in awe of Wilson (DC) and its impressive frontline Saturday.

The No. 2 Panthers wore out the reigning District city champs, 75-51, in the final game of the Baltimore Hoops Festival inside St. Frances’ Phelps Gym in east Baltimore. No. 4 Patterson, sixth-ranked Boys’ Latin School, No. 10 McDonogh School and 17th-ranked Edmondson each picked up victories Saturday.

Trailing entering the fourth, the Hagerstown school outscored Hill (6-6), 20-2. Rahsaan Edwards added 18 points for Goretti, which next plays No. 1 and BCL-leading Mount St. Joseph at The Smith Center in Irvington.

After blowing a big second half lead to Milford Mill Academy last year, Mervo executed in the rematch, claiming a 70-57 victory. Elijah Rantin and Damonee Carter each scored 21 points for the Mustangs (4-5).

The Baltimore City school which lost, 54-50, after constructing a 19-point second half advantage last season, led 35-29 at halftime Saturday before Milford Mill closed to 36-35. The Mustangs answered with a 12-3 run to take a 48-38 advantage into the fourth quarter.

“We saw when we scouted them that they had trouble shooting from the perimeter,” said Mustangs coach Deron Harding.

Jermaine Goodwyn finished with 21 points for the Millers (3-5), and  Lincoln University recruit Deonte Dunlap added 17. The Baltimore County power, which reached the Class 3A state final last season, is going through growing pains with a young roster.

“We’re still learning how to play as a team, and I think we will,” said Millers coach Ryan Smith. “If we’re going to take lumps, I rather take them in the beginning.” 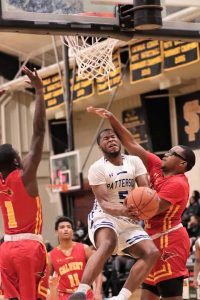 Patterson’s Gerard Mungo (5) is met by Calvert Hall’s Kevin Collier on a drive to the basket. Mungo finished with 16 points and 10 rebounds as No. 4 Patterson improved to 8-2 with a 93-67 win over the Cardinals. (photo – Jimmy Fields Sr.)

No. 4 Patterson pulled away from Calvert Hall College for a 93-67 victory. Senior wing Marvin Price finished with 22 points and 10 rebounds for the Clippers (8-2).

The Baltimore City squad outscored the Cardinals, 48-31, winning its second game in as many days. Patterson defeated National Academy Foundation, 82-46, Friday in a city league match.

With Price, one of the area’s top seniors back at Patterson after spending part of his junior year at West Virginia’s Huntington Prep (returned to Patterson in February), the Clippers are expected to contend for the city league championship. Patterson won the city and Class 2A title in 2017.

Price, who’s finding his “legs” after an offseason knee injury, said the Clippers are more versatile than the 2016-17 squad.

“This team has more options,” said Price, who pulled down 10 rebounds Saturday. “If one person’s off, we have others who can score 20-25 points if needed.”

East Carolina recruit Logan Curtis had 15 points for Calvert Hall (3-11), which lost at Boys’ Latin Friday. The Cardinals have dropped seven straight and nine of 10.

The Lakers led 41-31 in the third quarter, but Farragut (7-7) tied the game at 52 in the fourth. Sam Grace (11 points) answered with a 3-pointer for the MIAA A Conference squad, which went 7 of 8 from the free throw line to keep the St. Petersburg’s school at bay.

Winston Dessessow, who started his prep career at Milford Mill, finished with 24 for Farragut, coached by Julian Allen, who served as an assistant at Friends School, Oakland Mills and Harford Community College. Darius Webb, formerly of Harford Tech, had 15. 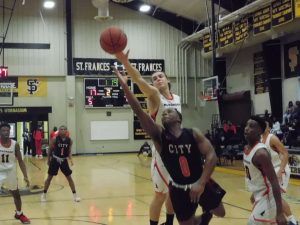 City’s Sammy Scott (front) and McDonogh’s Lukas Michaelson battle for a rebound. The No. 10 Eagles rallied in the fourth quarter for a 46-44 win over the Knights.

McDonogh climbed out an eight-point deficit in the fourth quarter to defeat City College, 46-44. Dave Brown scored 15 points for the Eagles (10-4).

Trailing 33-25, McDonogh went on a 17-4 run, capped with Brown’s basket off a pass from Everett Cooper, for a 42-37 lead with 2 minutes, 20 seconds remaining in regulation. City rebounded as Dominick Carrington’s 3-point play with 7.3 seconds left tied the game at 44.

Carrington fouled Jarred Billups with 5.7 seconds remaining. The sophomore hit the front end of the double bonus, but missed the second. After a scramble for the ball, Cooper got possession and called timeout with 1.9 seconds to play.

Billups was fouled on the inbounds and hit one of two free throws. Billups, a sophomore, and Brown combined to convert seven of nine free throws in the Knights’ rally.

“We found a way to win, even on back-to-back nights,” said Holmes. “We’re growing together. These guys trust each other and like each other.”

Harrington led City (4-6) with 12 points. After surprising showing last season, the Knights, a preseason VSN Top 10 team, have struggled with consistency in the first month of new season.

“I don’t know what else to say but growing pains ,” said City coach Omar Smith, whose lost at Edmondson Friday. “At times, we look above our age. Other times, we look our age. To get to the good days, you got to get through the dog days.” 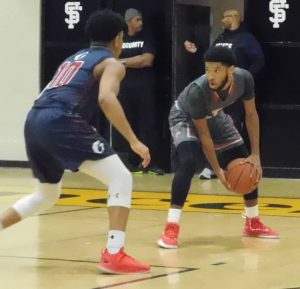 Edmondson’s Keith Bolden (with ball) is defended by Gerstell’s Jeremiah Stanton. Bolden finished with a game-high 26 points as the No. 17 Red Storm held off the 14th-ranked Falcons.

Edmondson got 26 points from Keith Bolden and 22 from Tra’shawn Lewis in a 64-55 victory over No. 14 Gerstell Academy in the lone Top 20 match at the Hoops Festival.

Up 33-28 at half, the Red Storm pushed the lead to 45-34 late in the third quarter. Gerstell (8-7), the defending MIAA B Conference champs, used halfcourt defensive pressure to close to 47-46 on Ahmed Harrison’s free throw with less than 7 minutes left in regulation.

Edmondson answered with a 10-0 run, including Bolden’s 3-pointer and 3-point play from Lewis, to pull away. At 8-1, the Red Storm have “quietly” entered the chase for the city title.

“Give the kids the credit, they’ve been listening and playing hard,” said Red Storm coach Darnell Dantzler. “They’re trusting each other.”

The featured match between St. Frances and Wilson was a resounding mismatch. Senior guard Rajeir Jones poured in 18 points and Adrian Baldwin finished with 14 and 7 assists. 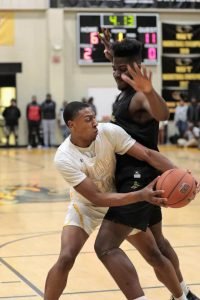 St. Frances’ Jamal West gets the ball as Wilson’s Mehki Mitchell obstructs him. The No. 2 Panthers pulled away in the second half for a 75-51 decision in the showcase match of the Baltimore Hoops Festival. (photo – Jimmy Fields Sr.)

The east Baltimore led by as many as 26 points in the second half.

“Wilson is a talented bigger team, but after playing three nights in a row at the Chic-fil-a Classic really benefited us,” said Myles. “You got to make it tough for them to get the ball.”

“We had to make them move around,” said Jones. “When we run our offense we made sure they were constantly moving.”

The Mitchells combined for 24 points (Makhi had 10 and Makhel 14), but only had eight after halftime. Meanwhile, St. Frances had its way offensively on the perimeter and inside.

“That’s our identity, running the floor, getting out on the break,” said Toles. “We just played our regular game and played tough.”

Baldwin got a loose ball and flipped it to Toles who went in for a two-handed jam. West (8 rebounds) beat Wilson’s defense down out for an uncontested jam and Murphy got free inside for easy back-to-back flushes, giving the Panthers a 55-38 advantage midway in the third.

The Panthers led 61-43 after three. Back-to-back 3’s from reserve Taquan Busby and another Jones jumper to open the fourth made it 69-43.

“They’re a good team, but we felt we were tougher and more disciplined,” said Toles. “We showed that today.”