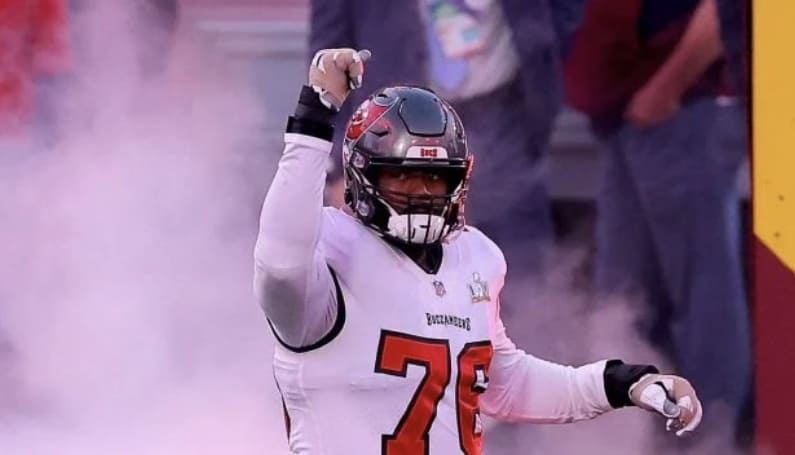 This time a year ago, Donovan Smith was under some criticism. Today, he’s a Super Bowl champion.

“Surreal….I don’t think it’s hit me yet,” said Smith, who started at left tackle on the offensive line.

Brady, who came to Tampa Bay as a free agent last March, was named Super Bowl Most Valuable Player for the fifth time in his iconic career. The former New England Patriot collected his record seventh Super Bowl title Sunday.

“You go out there and do what you have to do and let him (Brady) be back there and stand in the pocket and pick people apart,” said Smith. “That’s what makes him the G.O.A.T. I’m just out there to protect my man.”

Smith, VSN’s No. 1 Offensive Line of the past decade, had been criticized the last several seasons by the Tampa media for his play. Smith, who was drafted by the Bucs in the second round of the 2016 NFL Draft out of Penn State University, received a three-year, $41.25 million contract extension in 2019.

The Bucs were middling at 7-5, then won their final four regular season contests to qualify for the NFC playoffs as a wildcard. Tampa Bay defeated division winners Washington (East), New Orleans (South) and Green Bay (North) – all on the road – to reach the Super Bowl for the first time since 2004.

Smith said the Bucs’ confidence didn’t wavered, especially with the greatest quarterback in NFL history in the huddle.

“Five guys on the same page and making sure we listen to Tom and whatever he wants to do and just going out there and balling,” said Smith, whose line allowed only two sacks in four postseason matches.

The turnaround for Smith and Tampa Bay was completed Sunday night as the Buccaneers became the first team to play – and win – the Super Bowl in their home stadium.

“We made history out there,” said Smith. “We knew what we had to do, go out there and do what we were playing for back in July.”