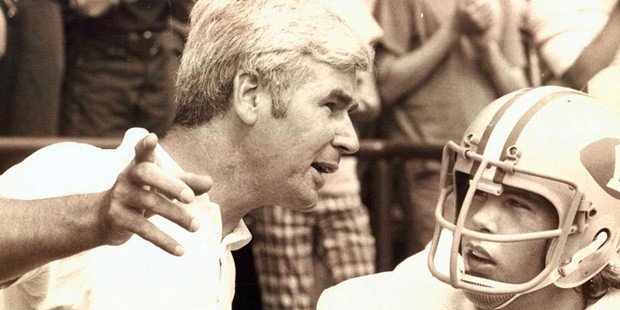 Despite being canceled for the first time since 1920, the Turkey Bowl lore lives on; Listen to all 11 episodes of VSN’s historic “Turkey Bowl Tales” podcast hereby Nelson Coffin

Joe Brune will be doing something different this year on Thanksgiving morning.

The Loyola Blakefield legend will put on his blue-and-gold Loyola jacket he earned for meritorious service during a 35-year football coaching tenure at his alma mater— he said, for a coach “a hundred years old” — and walk around the block in his Rodgers Forge neighborhood.

For the vast majority of his life, beginning before World War II, he would attend what has become to be known as the Turkey Bowl — the annual showdown on the gridiron between his beloved Dons and arch-rival Calvert Hall College.

He remembered holding his father’s hand as they walked to the game that was then staged at Homewood Field on the John Hopkins University campus and would later be held in bigger venues, such as Municipal Stadium, Memorial Stadium, M&T Bank Stadium and, more recently, Towson University’s Johnny Unitas Stadium.

“We went with my father’s best friend, who was a Calvert Hall grad,” said Brune, who still holds the coaching record for most wins (19) and the longest winning streak (11) in the storied series in which he also played.

This year, though, the century-old series finally met its match.

Just five days before the Dons and their cross-Towson foes were set to play for the 101st consecutive year, their traditional meeting was canceled due to concerns about the alarming spread of the coronavirus.

It was almost as if Lucy, of Peanuts fame, moved the ball from Charlie Brown a split-second before he attempted a kick, only to land on his backside instead.

Brune framed it another way.

“I feel so bad for the kids,” he said. “They’ve been through so much uncertainty. It’s been a roller coaster year for them.”

Still, for longtime observers, participants, coaches and fans of the game, the loss of the 2020 edition is a bitter pill to swallow.

“I’m very disappointed that we’re not playing this year,” said John Stewart, who worked for more than four decades at Loyola and was an assistant football coach under Brune after graduating from the school in 1960. “Until Saturday, I thought we were going to play.”

Stewart remembered being in the stands for the 1957 game, deemed by many to be one of the greatest upsets in series history.

“I was there when Loyola won, 7-7,” he joked about the Dons earning a tie against heavily-favored Calvert Hall that day.

Calvert Hall alum Mike Heffernan, who missed the 1957 game with an illness and played for the only time against Loyola a year later, said that he has heard that some people from both schools are upset by the decision.

“I don’t like it, but I’m not upset or rattled” by the decision he said.

Heffernan added that he attended his first game in the late 1940s with his uncle, Chuck Burke, who played baseball for the Cardinals and extolled the virtues of the school that was still located downtown on Cathedral Street before moving to its current site in Towson in 1960.

“From the time I was 5 years old, I couldn’t wait to get to Calvert Hall,” he said.

Another former Calvert Hall player and coach, Tom Bateman, said that his streak of witnessing 70 straight Thanksgiving Day battles between the two schools will come to an end.

“My dad took me to my first game when I was four,” he said. “And I played in three games, coached in 12 and scouted (for CHC) for 50 years. The only good thing about the game being canceled is that at least we won’t lose. I think Loyola is a little stronger than we are this year.”

Bateman said that despite the snapping of his 70-year streak, it’s better to not take the situation too seriously.

“I have a lot of an emotional investment in the game, but things are so bizarre now, you just can’t react to everything,” he said with a chuckle. “So I just said to myself that once I’m dead I’ll miss all of the games anyhow, so it doesn’t really matter.”

With Bateman’s assessment of the teams’ relative strengths in mind, it’s probably wise to remember last year’s centennial game in which Calvert Hall prevailed, 33-10, in front of more than 11,000 fans at Johnny Unitas Stadium against a Loyola squad sporting a sparkling 8-1 record entering the contest as opposed to the Cardinals’ 8-3 mark.

Against their one common opponent, Archbishop Spalding, however, the Cardinals fared better than the Dons.

That said, Loyola senior quarterback Jordan Moore would have probably been the best — and most dangerous — player on the field in the 2020 tussle. The Duke commit tossed a 35-yard pass to Ben Schlieff for the Dons’ only touchdown in last year’s setback.

Both current coaches said how difficult it was to tell their players that their season was over before participating in the game that matters most.

“It wouldn’t have been as tough if we had known that we weren’t going to play a couple of months ago,” Zehyoue said. “I was just starting to figure out how to turn things around after what would have been a short week (following the St. Mary’s game). Our kids were in shock. It’s really frustrating and so hard for the seniors because those are lifelong memories that they’ll never have.’

Ward said that when he saw that Calvert Hall athletic director Lou Eckerl had called his cell phone after practice on Friday night, the first-year coach knew that something was up — and it wasn’t good.

“Anthony and I spoke and decided to tell the kids on Saturday morning at 9 a.m.,” Ward said. “All these kids know each other, so we wanted to make sure they heard it from us first. Anthony had to tell his kids by Zoom because they were going to their game at St. Mary’s by car instead of buses (because of social distancing). At least I got to tell my kids in person, and there were a lot of tears. Ironically, I had told the kids at practice Friday night to play every play like it’s your last one. Still, they were in shock and I’m still in denial. It’s definitely frustrating.”

Donald Davis, who owns the best record for any Calvert Hall coach on Thanksgiving with a 10-3 mark, put a difficult decision in perspective.

“Even in its absence, the Turkey Bowl illustrates the importance of family, community and our interconnectedness,” said Davis, who left his alma mater earlier this year to take over coaching duties at Sidwell Friends School. “While I feel terrible for the seniors at both schools, the cancellation is a sober reminder of the seriousness of the challenges we are all now facing.”

Prior to the 100th Turkey Bowl in 2019, Varsity Sports Network produced an 11-part podcast – Turkey Bowl Tales – in which we conducted interviews with many of those who participated in and or observed many great moments in the Turkey Bowl’s storied history. Below are links to each of those podcasts for your listening enjoyment: