It takes a team to pull-off a girls’ lacrosse win, and the Catonsville Comets used every player on their team, Wednesday, earning their most recent win over the Hereford Bulls, 11-10.

The Comets jumped out to a 5-2 lead in the early goings of the first half, scoring on fast breaks and slick moves to slip through the Hereford defense, which made the ending of Wednesday’s game all the more extraordinary.

“It’s always a close game, but the game didn’t get great energy until the second half, and that’s when both teams really started to play,” Hereford coach Anne Ensor said.  “We had a few unfortunate turnovers and a few missed shots, and, in a game like this, that stuff matters.”

Not allowing Hereford a lead until late in the second half, the Comets found their first deficit with seven minutes remaining in the game, but tied the game with a diving goal by freshman attacker Brooke Stevens for the team’s ninth goal.

Brushing the athletic play aside, Hereford’s Anna Curreri notched a 10-9 lead changer for the Bulls with three minutes to play, which was again countered by the Comets, this time by an unassisted Alex Wallace.

But Wallace wasn’t done yet.  Less than a minute later, Stevens made one of the biggest plays of the game when fully extending her stick to intercept a Hereford pass, leading to Wallace’s game-winning goal, 11-10.

Wallace finished the day with three goals and an assist, leading teammates Stevens, Rachel Schwaab and Chloe Corbett, who each net two goals for the Comets. 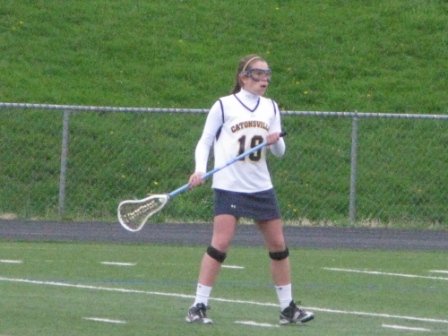 “We still have to work on composure and slowing down,” Wallace said of the Comet offense.  “But all in all, we do really well on fast breaks and slow breaks.”

Milani also added a goal to the Catonsville scoreboard, coming off a fast break pass from Corbett for a 4-2 lead in the first half, and Claudia Flister notched her own goal in the second half.

“I thought that our offense played really, really hard and aggressive, causing some turnovers,” Comet coach Becky Clipp explained.   “We had some composure at the end of the game, getting some key possessions and some knockdowns, and our goalie came up huge.”

Between the pipes, Lily Schmulowitz made nearly 10 saves, keeping the Hereford scoring at bay, and giving the Comets a chance at a girls’ lacrosse win.

“I really had to follow the ball and track the girls with the balls in their stick,” Schmulowitz said.  “Just had to make sure I could make the best save possible.”

In all, six different players net goals for the Comets, making the Hereford defense worry about any Catonsville player making a break for the goal.

“Their scoring was supper spread out,” Ensor explained, “and it is hard to defend against a team that has that many different people scoring.”

The Bulls were never far behind the Comets in the game, trailing at most by three goals and playing with Catonsville to five ties.  Hereford led twice in the game, both coming near the end of the second half.

“It was a well matched game and it could have been anybody’s game today,” Ensor said.  “But it was deserved and they played well.”

Hereford’s next game comes on Friday against Towson, while Catonsville takes on Perry Hall.

“We need to believe that we can win these games, and this is a good start,” Clipp said.  “Running through our offenses is a huge thing.  Fast breaks are great, but we need to be able to possess the ball and relax a little bit, give our defense a break so they can be aggressive throughout the game.”