Miceli, the legendary Hall coach, passed in away in July shortly after retiring after 60 years as a teacher at the Towson school. From 1974 to 1987, Miceli won 100 games as Cardinal football coach, including nine Turkey Bowls.

Davis, who played for Miceli, surpassed his mentor Thursday with his 10th Turkey Bowl triumph. His 10-3 Turkey Bowl mark is best by a Calvert Hall coach.

In its run of 10 of 11 victories, Calvert Hall has scored 30 or more points six times…Loyola’s lone victory during run came on Jake Nordhausen’s extra-point block in overtime in 2013…The Dons have scored only a touchdown in three straight Turkey Bowls…Davis heads into 2020 with a chance to surpass Miceli as the Hall’s all-time winningest coach (98-56 in 13 seasons) and equal Miceli’s mark of seven straight Turkey Bowl wins.

Shawn Tucker had five carries of 10 yards of more, including a 47-yard run…Cole Herbert also had a fumble recovery to go with four carries for 50 yards and 28-yard touchdown reception…Amir Jenkins and freshman Noah Brannock combine to go four-of-10 passing from 123 yards…The Cardinals had 445 yards of offense…Mike Johnson and Kahlil Glover each had eight tackles to lead Calvert Hall’s defense…Tre Jordan had three tackles and a forced fumble.

Jordan Moore’s 35-yard touchdown pass to Ben Schlieff was Loyola’s longest play from scrimmage…Moore finished 18-of-37 for 170 yards and rushed for 38 (14 carries)…Peter Lukish caught three passes for 55 yards with Schlieff finishing with five for 49 yards…Kaire Umoja was the Dons’ top rusher (11 carries, 53 yards)…Sophomore linebacker Anto Saka finished with 10 tackles for the Dons’ defense with Cian Callahan providing six tackles and a sack and Noah Bull had an interception.

In the second quarter, Calvert Hall’s Cobie Floyd was tackled by Loyola’s Joshua Buck on a running play. Floyd and Buck’s uniform number is 7.

The run went for seven yards. 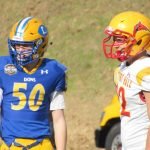 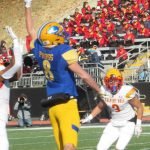 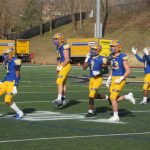 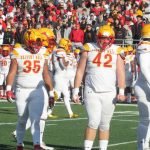 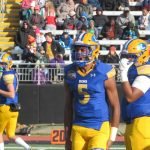 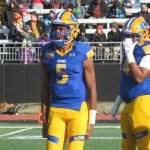 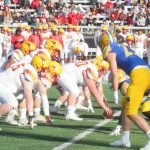 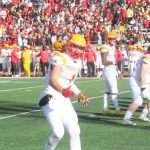 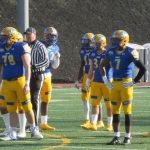 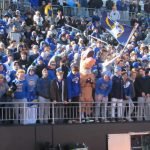 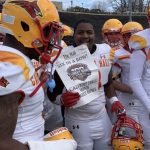 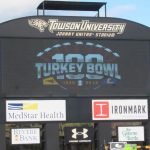 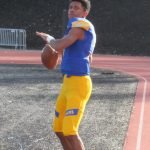 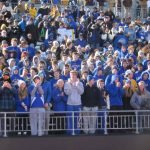 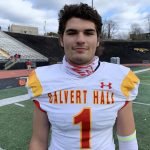 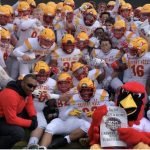