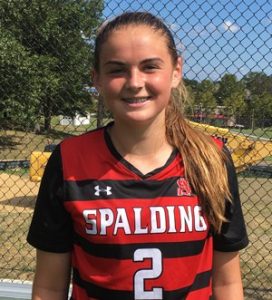 Spalding freshman Sophia Thibeault scored both goals for the Cavs in a 2-1 win over River Hill on Saturday in the IAAM Challenge at Mercy’s new Sisters of Mercy Complex in Baltimore.

If the idea behind inaugural IAAM Challenge at Mercy’s sparkling new Sisters of Mercy Athletic Complex on Saturday was to provide fans, players and coaches of public and private school girls soccer programs the opportunity to begin the season with high-level, non-league competition, consider it mission accomplished.

The event was a success in terms of attendance and level of play, giving each team a barometer of how it stacks up against quality opponents.

The caliber of play between the local heavyweights did no disappoint.

Even in McDonogh’s 3-0 conquest of the Gators, there was something to like for Perry Hall coach Matt Smoot and his charges.

For one thing, they gave up only a pair of goals in the flow of play against the talented Eagles, ranked No. 1 in the nation by Top Drawer Soccer, despite being outshot by an overwhelming margin.

Junior defenders/midfielder Alyana Lynchard notched the first McDonogh goal in the 14th minute on an assist from sophomore Kelsey Smith that rattled off a defender before eluding eluding Perry Hall junior starting keeper Brenna Ellenberger, who recorded four saves in the first half.

The Eagles made it 2-nil with just over 11 minutes remaining in the first half when junior forward Aria Bilal finished a perfect feed from senior midfielder Lilly McCarthy to complete a textbook fastbreak.

Their only goal in the second half came in the 49th minute on McCarthy’s penalty kick after what appeared too be a handball in the box.

In between and after the goals, however, the Eagles put almost constant pressure on the Gator backline, ably anchored by senior standout center-back Aya Neal.

Junior forward Baylee DeSmit just missed wide after Lynchard’s tally, as did Bilal, sophomore midfielder Olivia Ozbot twice on DeSmit feeds and McCarthy on a heavy left-footer from well outside the 18.

During that span, Perry Hall’s only retort of near consequence came off the foot of sophomore forward Mariah McQueen, whose offering plopped harmlessly off the side of the net midway through the opening period.

In the second half, McCarthy and DeSmit were both turned away by sophomore Notre Dame Prep transfer Delaney Forrester, who was credited with five saves while allowing only one goal on a PK.

Smoot said it was a good early effort against a team as fortified as McDonogh.

“Hats off to McDonogh,” he said. “They’re a great team. But I see this as a positive. With a public school team, you never know what you’re going to get in the pipeline from year to year. But I’m a lot more excited now. If we just trust each other a little more, we will get better. We have two good goalies who push each other in practice every day. I attribute our (lack of) offense to our youth. We just have to spread the field a little more.”

McDonogh coach Harry Canellakis said that it was a total team effort for the Eagles.

“I really liked how we played in the attacking third,” he said. “We created a lot of chances, and that’s what you’re looking for this time of year. We just have to get a little better finishing the ball. Our defensive spine — led by sophomore keeper Maddie Lowney, junior defender Cecily Pokigo and Lynchard — is one of our strengths. They know when to step in and when to drop off. And we’re really comfortable with Maddie in the goal.”

In the game just before the McDonogh-Perry Hall tussle, Spalding rallied from a 1-0 deficit in the second half to overtake River Hill, 2-1.

Freshman Sophie Thibeault scored both goals, which were assisted by sophomore Ashley Tutas.

What made the comeback even more impressive is the fact that the Cavaliers overcame severe disappoint in the second half when Tutas was denied on point-blank back-to-back shots, the second of which rocketed off the cross bar two minutes into the period.

River Hill sophomore goalie Caroline Duffy then made a spectacular diving save on junior Megan Garmey’s blast to keep the game scoreless.

To make matters worse for Spalding, the Hawks executed a beautiful free kick from senior defender Sophia Elguera to junior defender Minnah Uddin for a header to take a 1-0 lead in the 58th minute. 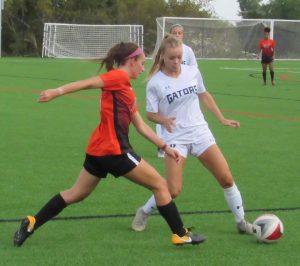 Less than two minutes later, however, Thibeault headed in a Tutas feed to knot the score that lasted just over a minute before the rookie was at it again, teaming with Tutas for the final goal.

Thibeault, who said that she didn’t expect to play much this season, lauded her teammates for helping her adjust to the varsity level.

“They inspire me and motivate me,” she said.

That the Cavs didn’t fold when it looked like fortune would not be their friend was not surprising to Spalding coach Ashly Kennedy.

“When you play against a great team like River Hill, things like that happen in soccer” she said. “It was a learning moment. I tell the girls to always anticipate that the ball will to come to them.”

“We didn’t play for about four minutes — we didn’t play smart,” he said. “But this game shows what we need to work on. It gives us a better idea of what combinations will work better the rest of the season. A loss in September doesn’t hurt that much. It’s the games in November that really count.”

Notre Dame Prep got by Sparrows Point, 1-0, and host Mercy handled Hereford, 4-1, in the final two matches of the event Saturday. On Friday, in the first game of the IAAM Challenge, Dulaney topped St. Paul’s School, 3-0.

Pictured above: Spalding junior Julia Ritter defends against River Hill sophomore midfielder Erin Regan in a 2-1 win over River Hill on Saturday in the IAAM Challenge.