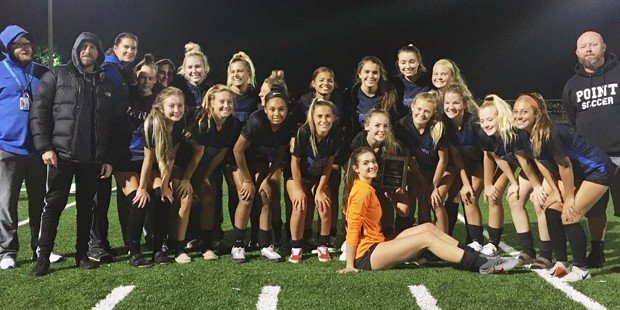 There’s no doubt that the Sparrows Point girls soccer team knows how to win.

Year after year the No. 7 Pointers (11-1-1) have proven as much by claiming six consecutive Class 1A state titles.

On Monday against eighth-ranked Towson (8-4-1), they made their case again by digging deep to eke out a hard-fought shootout victory in the Baltimore County championship game at Franklin High in Reisterstown for their fifth championship since 2013.

It wasn’t easy because the Generals wouldn’t allow it to be.

They fought, scratched and clawed to remain even with Sparrows Point for 100 minutes in their quest to supplant the two-time defending county champs.

The shootout, though, is where the Pointers prevailed, using successful strikes by senior midfielder Dezirae Mortimer, sophomore defender Jordan Wood, junior defender Abby Meadows and junior midfielder Sara Gruntowicz and a diving save by senior keeper Jaddah Foos to deny Towson its first county crown since 1991.

Senior midfielder Emma Kirts and freshman midfielder Lucy Vettori beat Foos on their tries to account for the 4-2 shootout score.

“It’s kind of like old hat to us,” Sparrows Point coach Lori Sexton said about the same shootout format that carried the Pointers to the county summit last year. “We have full confidence in Jaddah in those situations, but you hate to keep relying on her like that.”

Towson, who outplayed the Pointers by a fairly wide margin in the first half and scored first on a booming shot off the foot of junior forward Aalavia Wainwright in the 24th minute, was back on their heels in the second half and were finally equalized on a 45-yard free kick by Meadows that went well beyond Towson senior goalie Sofie Sorteberg with just under 10 minutes left in regulation.

The Generals tied Sparrows Point in the regular season as well, so they may have used that as momentum coming into the match.

“They put constant pressure on us,” Sexton said about the first half. “But I was just waiting for us to turn it on. I knew we would eventually click. Early in the second half, that’s when we got our meld together.”

“We talked about it at halftime,” Foos said. “We were giving each other constructive criticism. We knew this was real — and we had to wake up.”

Towson coach Lauren Hanley said that her team’s midfield speed was a major factor in the game.

“When we pressured them, they made some mistakes,” she said. “We had some fatigue in the second half, and their were some nerves, too. That was a lot of soccer.”