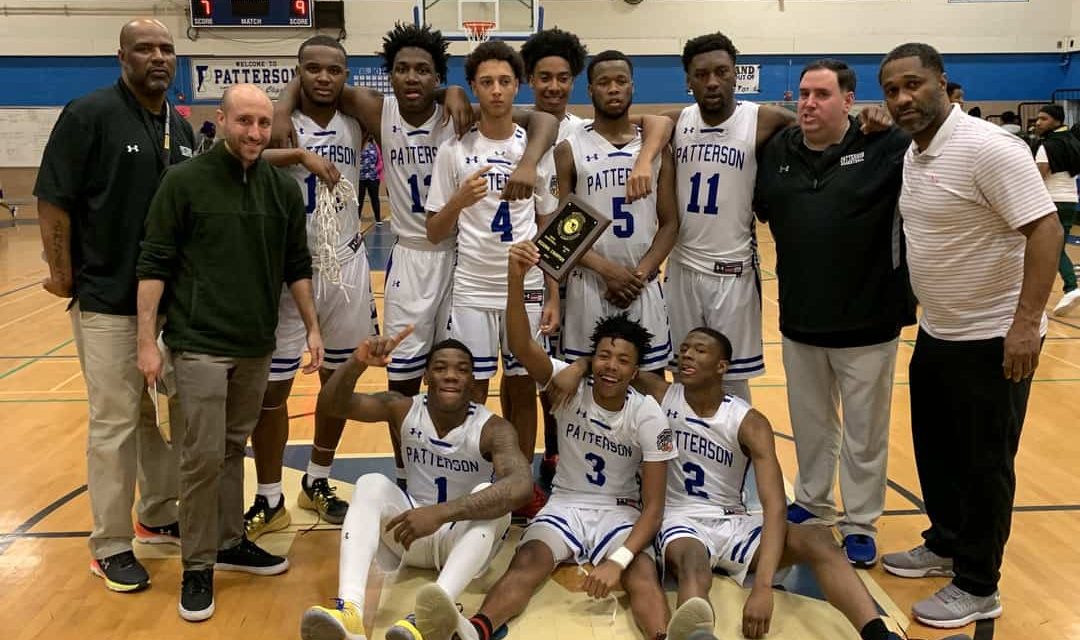 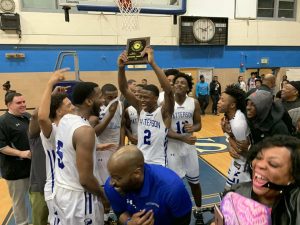 Patterson senior TJ Thomas holds up the Class 2A North Region boys basketball championship plaque after Friday’s victory over No. 6 Edmondson. The top-ranked Clippers gained their sixth state Final Four berth in nine seasons with a 58-49 decision in Baltimore City.

How big was it? It was loud enough to be heard over the PA system which was blasting celebratory music.

Thomas and the top-ranked Clippers punched another ticket to the state Final Four with a 58-49 victory over sixth-ranked Edmondson in the 2A North final in east Baltimore. Senior wing Marvin Price scored 21 points for Patterson (23-3 overall) and Thomas finished with 15.

In another Baltimore City league war of attrition, the Clippers made enough plays over the final eight minutes to earn their sixth trip in nine seasons to the University of Maryland. Patterson will play southern Maryland’s Thomas Stone in a 2A final four match Friday at the Xfinity Center.

Playing out like a boxing match, Patterson was stunned in the opening quarter, and exchanged blows with their west Baltimore rival in the middle frames. Finally, the Clippers put together enough quality body shots in the final quarter to put the Red Storm on the mat for the third time this season.

“Edmondson is a great opponent,” said Patterson coach Harry Martin. “I told our guys keep battling every possession. Free throws, a couple of shots here and there, and we were able to grind out a win.”

“Most of the time when we’re down like that or having a rough game, at some point in time we’re going to get it right,” said Thomas. “We just need to stay together.”

The Clippers got it right, especially on the defensive end in the fourth quarter. The Kane Street school held Edmondson to a field goal in the last frame, and 11 points in the second half.

“I thought the pace was in our favor especially in the second quarter, and it wore then down,” said Martin. “I thought the third and fourth quarter they didn’t have their legs with them.”

“We just know it was time to lock up,” said Price. “A loss, the season is done.”

Price couldn’t get his shots to fall for most of the game Friday. But like in the city title last month, Price was right when the Clippers needed most.

With Patterson trailing 46-45 to start the fourth, Price tied the game with a free throw and converted inside, giving the Clippers the lead for good. Patterson forced a turnover, and Thomas scored on a drive, pushing its lead to four with 5 minutes, 12 seconds left in regulation.

When Price finished a drive-and-dish play with a dunk wth 40 seconds remaining, it was the proverbial knockout blow.

“Just keeping fight. I know other people is going to step up if I’m off or someone is off,” said Price. “Just keep playing hard.”

The Red Storm controlled the early portion, leading 25-14 midway in the second quarter after a jumper from Quran Smith. Patterson upped its pace as a dunk from Jalen Willis, followed by a 3-pointer from the corner from Thomas, gave the hosts a 35-34 late in the second quarter.

The tempo came to a grinding halt in the third quarter with 15 points total along with three ties and five lead changes. Edmondson led 46-45 after Markus Hocker’s basket with 57 seconds left in the quarter.

The Red Storm didn’t convert their next basket until Treshawn Lewis’ drive with 3:54 left in regulation, making it 50-48. Edmondson struggled to finish around the basket in the final minutes.

When Hocker’s 3-point attempt fell short of the basket in the final seconds, the Red Storm, whose season was a built on grit and effort, had nothing left.

“I’m proud of the kids — they played well all year,” Edmondson coach Darnell Dantzler said. “Just today, down the stretch, we had a lot of unforced turnovers and then we missed a ton of layups. My hat goes off to Patterson, but I think we beat ourselves down the stretch.”

Not mentioned among the city league’s elite entering the winter, Edmondson put together an impressive 22-4 campaign. Three of those setbacks were courtesy of Patterson.

“It’s frustrating for the kids,” Dantzler said, “but my whole thing is they fought as hard as they could fight all year.”

Patterson will be the early-line favorite going into next weekend’s 2A state final four. The Clippers won the 2A crown in 2017.

“This is what we wanted all season,” said Thomas. “Coach Baseline [Patterson assistant Dereck Oliver] always say to us if we don’t get to College Park the season’s a waste. We’ve done everything we could to get down there.”