Last year at this time, Brady Stangle was in the eighth grade and playing for the Fellowship of Athletes club team. 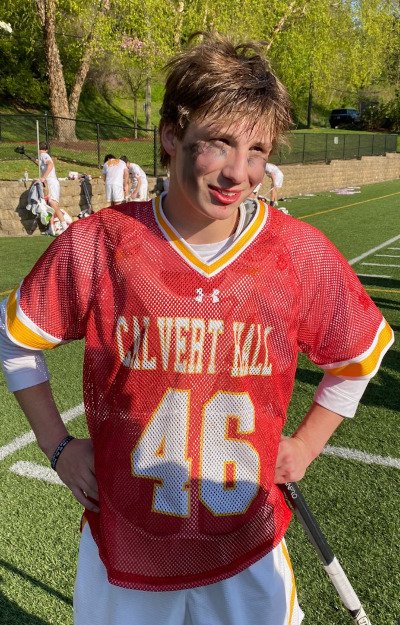 On Friday, making his debut on one of the most hallowed grounds of prep lacrosse — Boys’ Latin’s J. Duncan Smith Field — the freshman goalie more than held his own.

Stepping into the pressure-cooker of an MIAA A Conference showdown between the No. 2 Lakers and fifth-ranked Calvert Hall College, Stangle made 10 saves to help secure the Cardinals’ taut 11-10 victory.

Before the game, Calvert Hall coach Bryan Kelly was surprised to learn that his rookie keeper had never been on the BL campus.

“It’s hard to play here,” Kelly said. “You’re going to hear a lot of things (from the fans). It’s an environment like no other. But he’s just so loose and casual about things.”

Stangle maintained his poise in his debut against the Lakers, despite saying that he was “struggling to see the ball well” at the end of the first quarter and into the second period when the Lakers turned a 3-1 deficit into a 4-3 advantage on back-to-back goals by Nicky Brown and one by fellow senior attackman Jackson Walsh.

Stangle’s first start came in a 7-6 setback to John Carroll School when he said he started to adapt to the speed of the game.

“I was nervous at first, but once I got into the game it was go-time,” he said.

Since then he has been between the pipes for wins over McDonogh School and Gilman School before facing the prolific Laker offense.

Stangle’s first couple of stops helped the turnover-prone Cardinals (10-4 overall, 4-3 MIAA A) to take an early 3-1 advantage on two goals by senior attackman Truitt Sunderland and another by senior midfielder Jordan Wray.

After that 3-0 BL run, Stangle settled down.

“The nerves started to wear off and I started to play my angles better,” he said.

After Calvert Hall knotted the score on a rocket from junior attackman Davis Provost, senior midfielder Bratden Garland answered to give the Lakers a 5-4 lead.

The Lakers (10-3, 5-2 league) eventually drew even on goals by senior attackmen Dom Pietramala and Hopper Zappitello and sophomore attackman Spencer Ford, who swiped Stangle’s outlet pass and beat him from the doorstep with 9:43 left in regulation.

If ever there was a time Stangle to be rattled, that was it.

“That’s a huge ask for a freshman (to play well against a top team),” said Calvert Hall junior face-off specialist Jackson Strickland, who was credited with winning 18 of 22 draws. “He’s just been insane — crazy.”

Junior attackman Shuey Kelly put the Cardinals (10-4, 4-3) back on top, 10-9, from the wing by converting Provost’s third feed of the game less than two minutes later.

Sunderland gave Calvert Hall a two-goal cushion when the Virginia commit gobbled up a loose ball on a failed clear and rifled a shot into the net with 6:08 remaining.

Ford made Calvert Hall pay for a botched clear by beating Stangle after a feed by Zappitello with just over three minutes left in the game.

However, a late penalty against BL helped the Cardinals to hold on for the victory.

As much as Stangle deserves kudos for his role in the win, he said that he appreciates how well the defense played in front of him.

Holding Pietramala, for instance, to a pair of goals was a major achievement.

For the most part, senior JK Kelly shadowed the dangerous lefty sniper.

“JK did a great job on him,” Bryan Kellyn acknowledged. “But it took more than JK — everybody had to cover (Dom). He just has a speed and pace to the way he plays, and his release is so quick that you have to be ready at all times, I told Brady to be ready for him — he’s that quick.”

Strickland and his wingmen — junior defenseman Bradley Johnson and junior midfielders Josh Nagy, Donovan Lewis and Noah Brannock — were on fire throughout the game, giving the Cardinals just enough possessions to eke out a win.

“It was really a team effort,” Strickland said. “It’s not just winning clamps, it’s getting the ball to the right spots (for the wings). Our coaches do a great job of preparing us.”

Both teams will be back in action on Tuesday with Calvert Hall hosting Archbishop Spalding and the Lakers traveling to Annapolis to take on No. 1 St. Mary’s.