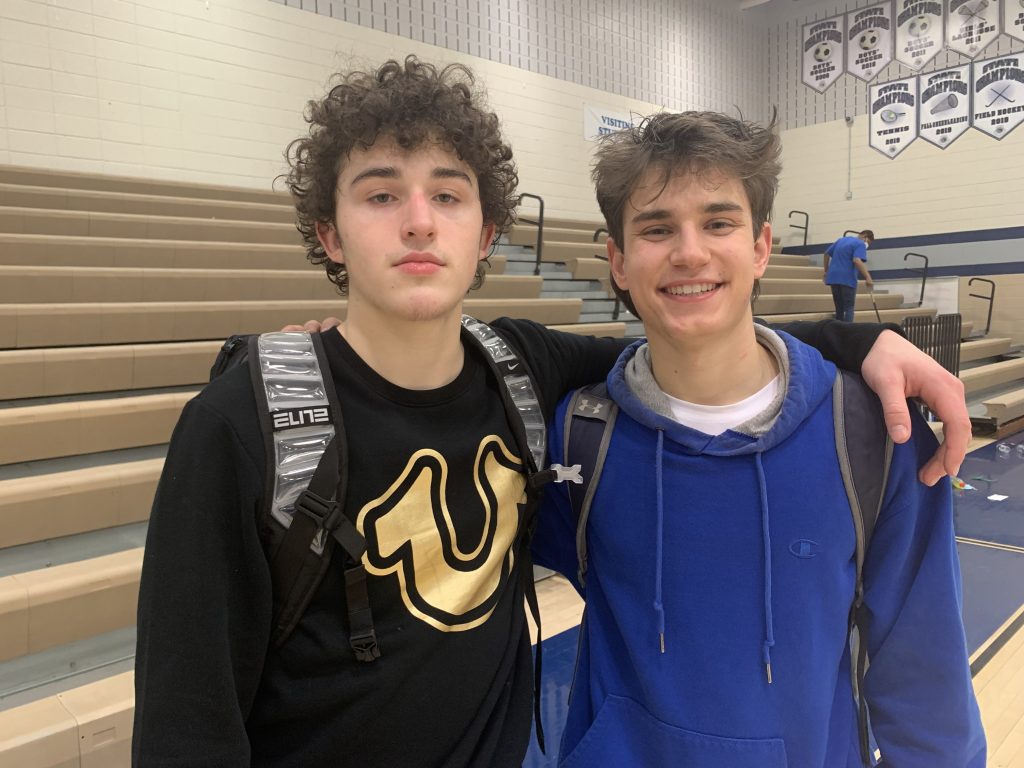 This time a year ago, the only basketball CJ Kocak experienced was playing pickup at an indoor facility or neighborhood playground. Kocak couldn’t wait for the opportunity to again play for Marriotts Ridge High after the 2020-21 season was canceled due to COVID-19.

The Mustangs led by as many as 17 points before repelling a fourth quarter charge by Atholton to claim the inside track to the Howard County championship. Marriotts Ridge can win the title with victories at Long Reach and Mount Hebron next week.

With a large student section behind their bench, many wearing a sports jacket and tie, the Mustangs took care of business Thursday.

“This group is probably in my 20 years of coaching one of the closest knit groups I’ve been around,” said Marriotts Ridge coach Seth Willingham. “They cared about each other…they were relaxed in the locker room before the game and I told them I didn’t want to make too many adjustments to what they do, I want to play loose and play together.”

“It was tough junior year not having a season,” said Kocak, who finished with 10 points Thursday. “Basketball is my main thing.”

Building a 22-19 halftime advantage after a slow start, Kocak dropped a 3-pointer to start the second half and Marriotts Ridge took over. The Mustangs, behind Curtin, went on an 8-0 run, pushing a 31-26 lead into 39-26.

Curtin, a precocious 6-foot-2 freshman, grabbed a missed free throw, scored and was fouled. He completed the 3-point play, then followed an Atholton turnover, with a 25-foot dagger, for a 13-point advantage with 2:32 left in the third.

Curtin, who scored 21 points in the second half, said Marriotts Ridge’s defense helped get the offense adjusted.

“We knew it was going to be a dogfight. We just stuck to our defense and knew the offense would come,” said Curtin. “We’re a firepower team and we knew we got into transition, it would lead to bucket after bucket.”

“Our main focus was to get the ball into the high post and then when it collapses look to kick it out,” said Willingham. “Not let the ball stick and make the zone move. They did a great job of that.”

The lead grew to 41-26 as Mike White dropped a pass to Bryan in the paint. Kocak, after several pass exchanges with Curtin on the perimeter, fired a pass inside to Farrall for a short jumper, making it 43-28. Curtin followed with a transition score with three seconds remaining in the third quarter, giving Marriotts Ridge a commanding 17-point advantage.

Atholton mounted a comeback in the fourth. Walton-Smith, who scored xx points in the quarter, pulled the Raiders to 49-42 on a 3-pointer with 2:50 remaining in regulation.

Curtin, who hit four 3-pointer, calmly answered with a 30-foot dagger near the Mustangs’ bench. Atholton drew to 54-48 with 40 seconds to play, but Marriotts Ridge finished off the victory from the free throw line.

It was the first loss in 19 games, dating back to 2020 for Atholton, which reached the 3A state final four in 2020. The remainder of the 2020 state tournament was canceled due to COVID-19.

“Shots didn’t fall and that happens sometimes,” said Atholton coach Jared Albert. “The kids battle back through a lot of adversity. I’m proud of that.”

“I knew the talent we had coming in and knew we would be really strong,” said Kocak. “It was sad when Coach Lewis left but Coach Willingham stepped right in. He just rallied us together and we’re stronger than we’ve ever been.”