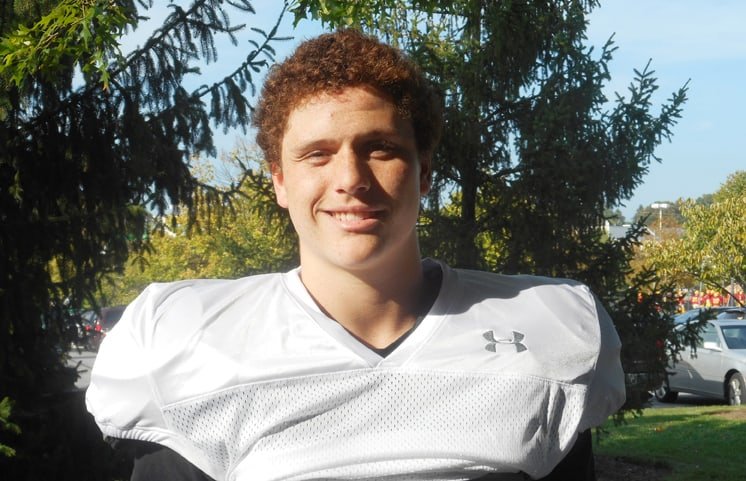 Having both an intimidating presence and intuitive feel for the game when he’s on the field, Chance Campbell has made the most of his three years as a starting linebacker on the Calvert Hall football team. 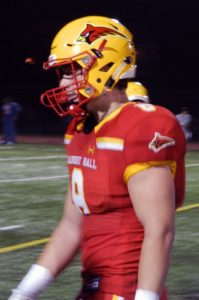 The 6-foot-3, 220-pound senior is the backbone of the No. 8 Cardinals’ stingy defense that is yielding a hair over 10 points per game so far this season.

Campbell was just a youngster when he first caught the eye of Calvert Hall coach Donald Davis, one of only nine area coaches with 100 or more victories.

“I met Chance when he was in middle school,” Davis said. “His maturation has been tremendous. It’s been a pleasure to watch him grow into a great young man, a tremendous student-athlete and a leader. It’s been great watching him grow up.”

Campbell’s skill level has hardly gone unnoticed, considering that he committed to continue playing the sport for the University of Maryland last spring and plans to sign a National Letter of Intent in December to complete the process.

“I am very proud of Chance,” said Davis, now in his 11th season running the football program at his alma mater.

The coach is also grateful for the many hours of preparation time Campbell spends on honing his craft.

“In a lot of ways, he’s like having a coach on the field,” Davis said. “He’s a kid who does a tremendous amount in terms of game-planning, watching film and preparing himself mentally. He’s a good-looking kid who can really move around, so he’s physically prepared for the wear and tear. Where he goes the extra mile — he goes above and beyond and scouts our opponents.” 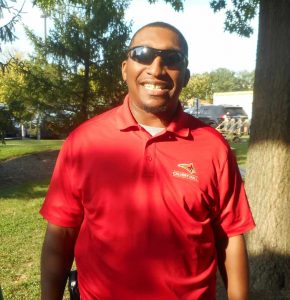 Calvert Hall coach Donald Davis seen Campbell mature as a player and as a young man since he first met him when he was in middle school.

Campbell, who has 35 tackles and a sack this season, said that he is very comfortable with his decision to join the Terps to play in the Big 10 Conference.

“The people were great, the university is great,” he said. “It felt like home, because it is home.”

He said that the fact that Maryland was the first program to recruit him was key.

“I felt like they trusted me, and that was kind of big for me,” he said. “I like that.”

“I felt like it was maybe a little bit far away in high school,” he said. “I didn’t really feel like it was going to happen — until it happened. They contacted me a little bit during and after my sophomore season. My first offer was after my junior season. That’s when it became a little more real.”

Campbell had a good opportunity to compare his skills against a slew of top Division-I football recruits when the state’s and VSN’s top-ranked team, St. Frances Academy, came into the Towson school’s Paul Angelo Russo Stadium on Friday night and won, 28-7.

Campbell had a tackle for a loss against the Panthers in the MIAA A Conference opener and also batted down a pass by University of Mississippi quarterback commit Jalon Jones.

“It was a decent showing for our team,” Campbell said. “St. Frances is a great team, so it’s always a great measuring stick. I think we did some things well, but even looking back on the film, there’s a lot of room for improvement. If we can make some strides, we can go from competing with them to being right up there with them. We have a lot of work to do, but I think we’re capable of it. We have a great group of guys. It’s never fun coming up short, but there’s definitely a lot of promise there.”

When asked what kind of year he had as a FOGO (face-off, get off) performer for the lacrosse team last spring, Campbell reverted to talking about the team rather than himself.

“As a team we did great,” said Campell, who split time with senior Michael Autry at the ‘X’ during the title run. “We went undefeated in the MIAA, something I think our coach said we hadn’t done in a long time. It was a fun team to be part of.”

While Campbell downplays his own contributions to the team, his coach, Bryan Kelly, won’t hear of it.

“He would be our main face-off guys if he is going to play again in the spring,” Kelly said. “Chance is a big, strong and very smart kid academically. He had a great year. He was dominant.”

Kelly said that Campbell won 68 percent of his draws, scored four goals and added three assists for the Cardinals.

Still, his focus remains on football in general and this season specifically, especially with No. 3 Mount St. Joseph visiting Friday night and a four-team postseason playoff down the road.

“We’re working hard and we’re shooting for that,” he said. “All we need is one shot.”

And then there’s always the Turkey Bowl against archival Loyola Blakefield to look forward to at M&T Bank Stadium on Thanksgiving.

“It’s huge for a lot of people, not just us,” he said about the 98th edition of the showdown. “We owe it to a lot of those guys (alumni) to come out on top.”