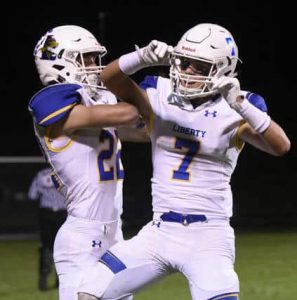 Liberty’s Nick Henderson (22) and Ryan Luthe celebrate after a touchdown in Friday’s key Carroll County Athletic League football match. The No. 16 Lions gained the inside track to the league crown with a 28-20 victory over the No. 11 Owls at Ruby Field.

The 16th-ranked Lions spoiled Westminster’s Homecoming with a 28-20 victory over the 11th-ranked Owls in front of a huge audience at Ruby Field. The win also left Liberty (7-0 overall) with sole possession of first in the Carroll County Athletic League (4-0).

The Lions’ ball-hawking defense picked off four Owl passes, leading to 21 points. Senior linebacker Wesley Kirin led the unit with nine tackles, a sack and an interception. Senior running back Nicholas Henderson had 22 carries for 86 yards and two touchdowns.

“There was definitely something extra since they [Westminster] beat us last year, but I feel as though we had to treat this like any other game and play as hard as we usually do,” Kirin said.

“We created some great schemes tonight for our guys and they stood tall all night long,” Liberty coach Larry Luthe said. “We made big tackles all night and now we are able to keep thing rolling.”

Westminster (5-2, 3-1 CCAL) moved the ball exceptionally well in their first possession taking its 40-yard line down to the Liberty 8, but the Lions stonewalled Owls quarterback Christian Etchison at the 5. Liberty marched 95 yards in 10 play, capped with Henderson’s 11-yard run for the game’s first score.

The Owls moved the ball in their second drive, only to see Kirin take over. Kirin sacked Etchison for a 15-yard loss on 1st down. On 3rd-and-11, Kirin intercepted Etchison and returned the pick down to Westminster’s 15.

“It was all a blur,” Kirin said while laughing. “When the ball was snapped my instincts took over and you just do what you are trained to do all week. It feels great that it all paid off and all the schemes we have been doing worked out.”

“Wes has been battled back from injury all summer he has come back and he has been freaking fantastic,” Liberty coach Larry Luthe said. “I couldn’t be more proud.”

The Lions needed just two plays as Henderson juked his way past two Owl defenders for an 10-yard scamper, putting the visitors up 14-0. Another promising Westminster drive ended badly, this time a 22-yard field goal attempt by Joey Long missing the mark.

The Owls got a huge break as senior Tavian Montgomery intercepted Liberty quarterback Nate Kent and went 35 yards to the end zone, cutting the lead to 14-7. Liberty returned the favor with Jack Bulikates’ interception leading to a 32-yard touchdown pass from Kent to Christopher Darminio late in the opening half.

Leading 21-10 at intermission, Liberty’s Peyton Scheufele came down with an interception off a tipped ball at the line and streaked down the left sideline for a touchdown, extending the lead to 28-10. Etchison, a Mount St. Mary’s lacrosse recruit, was knocked out of the game, but junior Levi Brodman stepped in to mount a Westminster rally.

Brodman (47 yards rushing) scored on a six-yard touchdown run, bringing the Owls to within 28-17. Long converted a field goal from 22 yards, making it an one possession match midway in the fourth.

Liberty mustered up a six-play drive that took four minutes before giving Westminster the ball back at the Lions’ 32 late in regulation. The Owls, thanks to a successful flea flicker, got into Liberty territory with 57 seconds left in regulation.

On 3rd-and-10 from the Lions’ 28, junior Michael Spitz intercepted Brodman at the 1. Liberty was able to run out the clock and move into position for the CCAL championship.

It was the first loss for Westminster in Carroll play since 2015.

Wes Kirin was all over the field defensively for Liberty Friday evening. The senior linebacker finished with nine tackles, a sack, and an interception.

“Just told the guys we need to see what we are going to do, how are we going to go about business,” Westiminster coach Matt Study said.” We got another tough game against Winters Mill and we need to get back to work.”