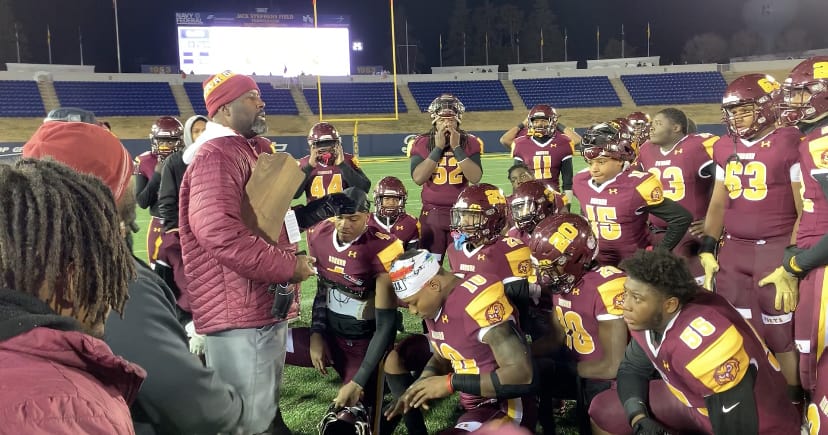 After the postgame handshakes, Dunbar High football team gathered around coach Lawrence Smith near its sidelines early Saturday evening. There was silence as the Poets were recognized over the public address system at Navy-Marine Corps Memorial Stadium.

They mustered a group clap after Smith received the Class 1A state runner-up trophy from MPSSAA Executive Director Andy Warner.  Smith said a few words and the squad gathered for one final huddle break.

Dunbar has rarely been in this situation during its quarter-century run as one of the state’s dominant programs. But as the Poets players and coaches slowly departed the field, reality shined brightly on the huge scoreboard leading to the locker room.

“It’s tough,” Smith said. “We got down early. We all know in football it’s hard to rebound from turnovers.”

The Baltimore City school had six turnovers Saturday, “deep-sixing” its bid for a record 11th title. For the first time since 2016 (third since 2000), the Baltimore-area was shutout at the championship podium.

Catoctin (12-2 overall), one of the smallest schools in Frederick County, completed a David vs. Goliath-like championship run. After dismantling defending state champ Fort Hill, 41-0, in last weekend’s semifinals, the Cougars scored the first 24 points Saturday against Dunbar (12-2), which has seven 1A titles since 2006.

Dunbar and Fort Hill had won every title since 2009.

Carson Sickeri rushed for 207 yards and a touchdown for Catoctin, and Ryan Orr threw two scoring passes to Travis Fields. Bronson Shurr returned an interception 27 yards for a touchdown.

All six Poet miscues came in the opening 24 minutes.

“Putting them in good field position hurt,” Smith said. “With a team like that, you can’t put them in short fields.”

Simon Granados put the Cougars ahead, 3-0, with a 29-yard field goal. Dunbar had a penalty and quarterback Karon Moore was sacked on its next possession that ended with a six-yard punt.

On the next play, Sickeri blew through a hole and went untouched into the end zone from 29 yards. Sickeri converted the two-point conversion after the Poets were flagged for roughing Granados on the point-after attempt.

Trailing by double-digits for the first time since the season opener against Mervo, Dunbar regrouped. The Poets advanced from their 32 to Catoctin’s 9.

Moore went for the end zone, but Sickeri pulled down the pass intended for Dearius Carr and returned the ball to the Cougars’ 17. After a major doze of Sickeri, Catoctin got the Poets’ defense as Orr lofted a throw to Fields down the sidelines for a touchdown, extending the lead to 17-0 early in the second quarter.

It was 24-0 after Shurr stepped in front of a Moore pass for Carr in the flat and went to the end zone with eight minutes, 14 seconds left before halftime.

After throwing 19 touchdown pass in the Poets’ first four postseason games, Moore threw four interceptions in the first half Saturday.

Moore finally connected with Carr on a crossing pattern. Carr got upfield and went into the end zone for a 42-yard score, getting the Poets on the board with 3:38 left in the second. Dunbar potentially had a chance to swing momentum before halftime, but defensive end Sean Carr dropped Orr’s pass.

Sickeri broke a 32-yard run on the next play. Two plays later, Fields pulled in Orr’s pass in the middle of the end zone, making it 31-8.

The Poets were far from deterred in the locker room at halftime, drawing from its opening loss to Mervo. Dunbar trailed 20-0 at halftime, but rallied to 20-14 and had the ball in the final seconds before succumbing.

“Keep your head up…come out with a different mentality,” said junior running back/defensive back Jermaine White. “The score’s 0-0.”

Dunbar kept Catoctin (missed two field goals) off the scoreboard in the second half. The Poets’ offense advanced as far as the Cougars’ 49.

Smith thought Dunbar’s youth showed “on the big stage” Saturday. The experience will serve as a motivation next fall.

“It’s a learning curve and we talk about life lessons, this one of them,” said Smith. “Everybody wants to win this game, but these are life lessons for the seniors as they move on. For the younger guys, they know what they have to do if they want to get back here.”

Dunbar running back Deon Crews-Harris kneels after Catoctin returned an interception for a touchdown in the first half. The Poets had six first half turnovers, resulting in 16 Catoctin points.

It was the final game for 12 seniors, led by 5-foot-10, 225-pound defensive end/running back Deon Crews-Harris, who was a powerful and steady presence.

“Hopefully they’ll come back and finish the job next year,” said Crews-Harris.