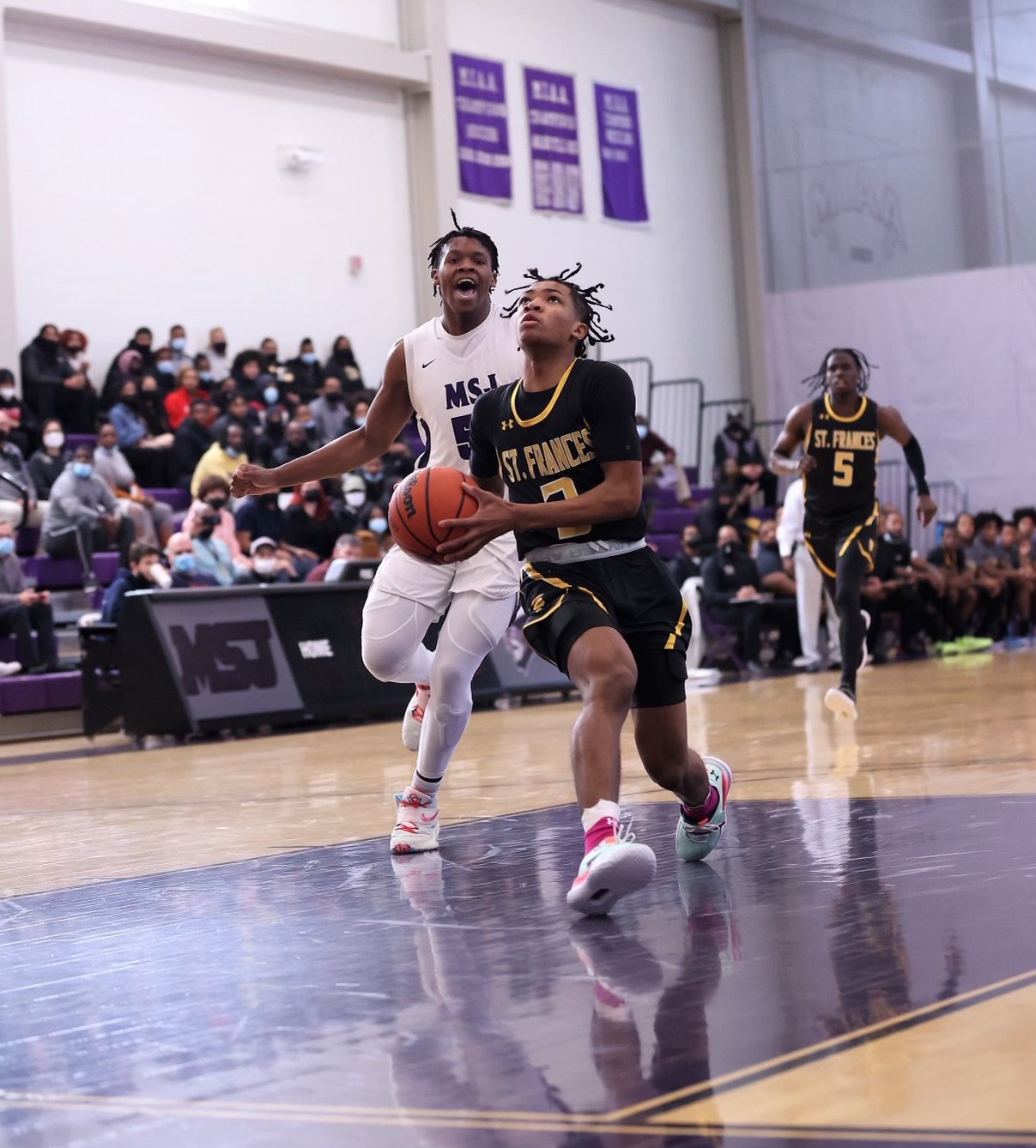 St. Frances’ Daquan Davis heads to the basket with Mount St. Joseph’s Amani Hansberry tracking him. Davis finished with 22 points as the No. 1 Panthers remained in the Baltimore Catholic League play with a 66-60 win over the fourth-ranked Gaels inside The Smith Center in Southwest Baltimore. (photo – Jimmy Fields Sr.)

Sunday’s boys basketball game between St. Frances Academy and Mount St. Joseph was a throwback to the yesteryears of the Baltimore Catholic League when games were played Friday nights and Sunday afternoons.

Whether it’s day or night, beating St. Frances continues to be a major undertaking for the rest of the BCL. The top-ranked Panthers posted a 66-60 victory over the No. 4 Gaels inside The Smith Center in Irvington.

The Panthers are on the path to a record fifth straight BCL regular season championship after winning on the Smith Center hardwood for the first time since 2017.

“We executed the game plan…we got to close out games better down the stretch,” said St. Frances coach Nick Myles. “It’s tough to get a road win in this league, and, in this environment is great.”

The East Chase Street school led by as many as 14 points Sunday, but Mount St. Joseph trailed only 64-60 after a jumper by Tucker with 1:21 remaining in regulation. A free throw each by Lindsay and Jahnathan Lamothe, combined with a couple of Gael miscues, secured the Panthers’ first two-game regular season sweep of its Southwest Baltimore rival since the 2017-18 season.

“We knew they were going to come out hard on us,” said Lindsay. “Home court, a lot of fans, we just had to keep the momentum.”

Lindsay helped keep the Gaels’ student section muted for most of the first half. The 6-foot-3 sharpshooter from Poly, dropped three deep 3-pointers as part of a 15-0 surge, turning a 12-9 deficit into a 24-12 advantage for St. Frances in the second quarter.

Davis had the “touch” in the second half. The sophomore hit three straight daggers including from the corner near the Panthers’ bench, turning a 43-35 game into 52-39 late in the third.

Whether it’s Davis, Lindsay, Lamothe or junior Carlton Carrington, St. Frances has rode whoever’s in the proverbial zone this season.

“That’s the best part and the most confusing part, you never know who’s day it’s going to be,” said Myles. “You got to figure it out and when we figured it out we just try to go through that guy.”

“My guys kept feeding me, they knew I had the hot hand,” said Davis. “They kept giving the ball and I had to provide for them.”

It was 64-58 after Ace Valentine’s 3-pointer from the near the Gaels’ student section. The Panthers turned the ball over on an inbounds violation, and Tucker, getting a pick from Hansberry, hit a short jumper to make it 64-60.

Mount St. Joseph got the ball after a defensive stop with 54 seconds left, but threw the ball away with 41.4 seconds left. Lindsay converted one of two free throws for a 65-60 with 16.9 seconds remaining.

The Gaels nearly lost the ball out of bounds as Abrams had to jump near the sidelines to save it. The ball came inbounds to Lamothe, who was fouled with 8.2 seconds to play.

It was the Gaels’ first home loss of the season.

“Whenever you play them, somebody is going to step up. Today it was Bryce and Davis…Cortez (Johnson) is a really good player and a factor on both ends of the floor,” said Clatchey, whose team’s six-game winning streak was snapped. “I thought our guys played hard…you can’t have empty trips especially late. They converted from the foul line and we didn’t.”

Sunday’s victory capped a successful week on the court for St. Frances, which handled No. 3 Our Lady of Mount Carmel Friday evening.

Off the court, the school community is coping with the passing of Lamar Patterson, a member of the football team. Patterson, a junior, was killed Wednesday morning when his car was struck by a MTA Light Rail train. 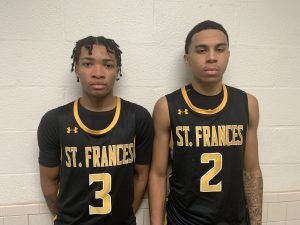 The backcourt of Daquan Davis (left) and Bryce Linsday moved St. Frances closer to another BCL regular season championship. Lindsay scored 23 points and Davis added 22 as the Panthers improved to 9-0 in BCL play.

Myles said the basketball team is dedicating the season in his memory.

“It’s been a tough week…I didn’t know how we would respond, but the guys stayed the course,”  said Myles, who’s the school’s athletic director. “It’s a big loss for our family. We’re moving forward day by day, that’s all you can do.”