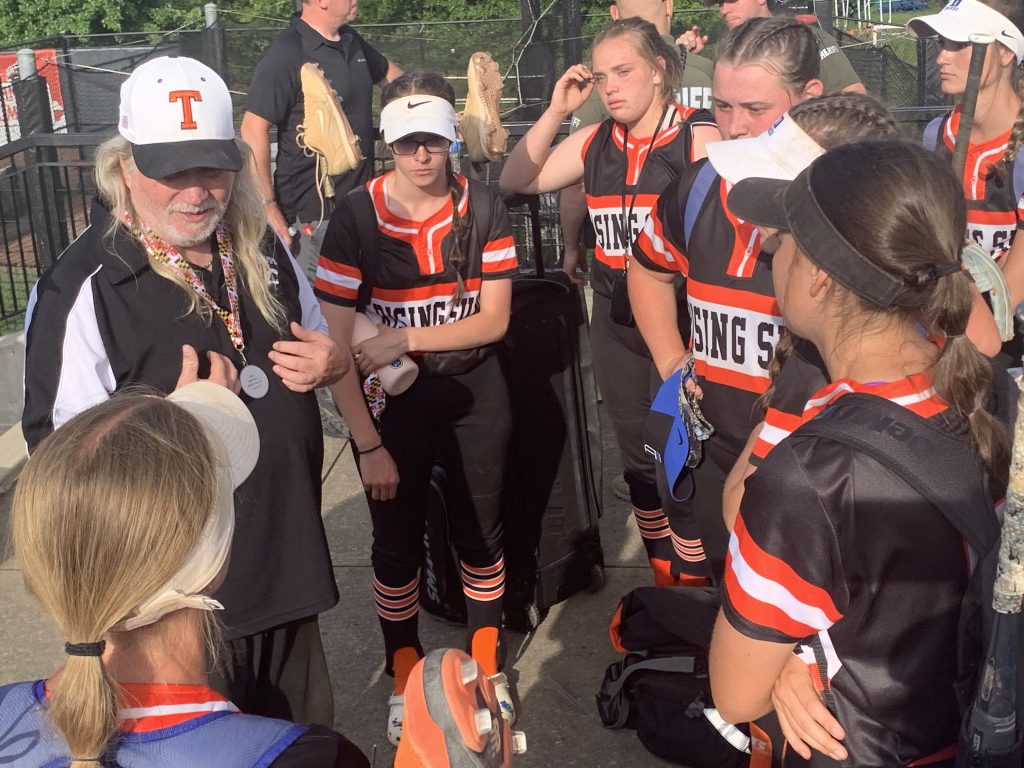 Rising Sun coach Paul Taylor (left) talks to his team after Saturday’s Class 2A state softball championship game. The No. 6 Tigers overcame a three-run deficit to force extra innings against Calvert, but the Southerh Maryland school scored the winning run in the bottom of the eighth to claim the crown at the University of Maryland.

“All year long, they’ve been battling back to win games,” said Tigers coach Paul Taylor. . “When we were down 4-1 heading to the sixth, I knew these girls would find a way.”

Rising Sun did, rallying in the seventh. But the sixth-ranked Tigers weren’t able to push through in extra innings, falling 5-4 to Calvert County’s Calvert in eight innings at the University of Maryland.

The wait continues for Rising Sun, which last hoisted a state championship trophy in 2003.

“We’re always used to having to come from behind,” said Rising Sun junior pitcher Cadence Williams, who took the loss while allowing five runs, four earned, on seven hits while fanning 10 batters. “Even when we were down 4-1 we weren’t worried. We knew we could come back.”

After drawing even in the top of the seventh on consecutive RBI doubles from Jordan Lynch and Bri Cole and then preventing the Cavaliers from scoring the winning run in the bottom of the seventh, Rising Sun came painstakingly close to attaining their first lead of the day.

Played under international tie-breaking rules with a runner starting at second base in the top of the eighth, Faith McCullough went to second for Rising Sun. Williams was intentionally walked, and both advanced a base with a sacrifice bunt.

But Calvert pitcher Emma DeBoer escaped the inning unharmed by retiring the next two batters, the latter on a pop-up that freshman catcher Kinetta Bradley caught in foul ground just in front of the netting. DeBoer started Calvert’s at-bat at second base and was immediately replaced by Milam.

After Williams fanned Megan Chroniger for the first out, she misplayed a grounder off the bat of Clara Wood that enabled Milam to reach third. Williams got ahead of Atherton, but the junior second baseman got enough of a 1-2 offering to plate Milam with a bloop single to shallow right to end the game.

Rising Sun  spotted Calvert an early 1-0 lead, then after the Tigers drew even in the top of the fifth by getting an unearned run, Calvert countered with three runs in the bottom of the fifth for a 4-1 lead.

The Cavaliers were only six outs away from the state title, but Rising Sun had no intentions of going away quietly.

“When we could not get the go-ahead run in the eighth and then they got that bloop hit in the bottom of the inning,” lamented Williams, who’s committed to South Alabama. “But most of us are back next year, so we’re planning to be back here next year.”

2023 looks very promising for Rising Sun, which had one senior in the starting lineup Saturday.

“Most of the girls are still young and we’ll have most of them back next year. Give credit to Calvert – they got the hit when it mattered,” said Taylor. “But my girls played their hearts out.”

Williams and Cole; DeBoer and Bradley.