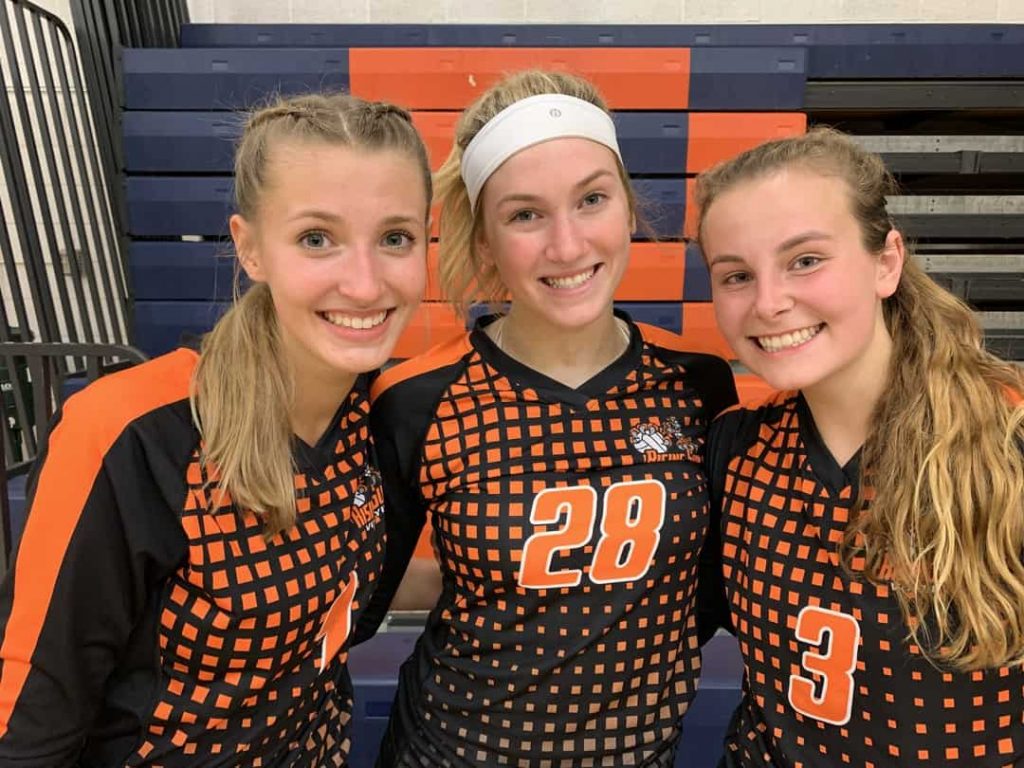 Emily Jackson (left) finished with 32 kills and Sophia Eckerd and Lauren Hudson had 19 and 11 kills, respectively, Monday for Rising Sun volleyball. The No. 11 Tigers defeated previously undefeated and 17th-ranked Poly in four sets in a non-league match in Baltimore City.

With regular season challenges far and few between, Poly High and Rising Sun volleyball teams viewed Monday’s non-league special as a litmus test with the state postseason around the corner.

Tigers coach Rich Wilson said the nearly hour ride from Cecil County was worth it.

“Athleticism out the window. That’s why we like playing them,” said Wilson of the defending Baltimore City champ Engineers. “In our conference, we don’t see athleticism and blocking like that. I knew it was going to be a crapshoot.”

The Tigers won the final three sets, withstanding a Poly (10-1) push in each. Lauren Hudson had 11 kills.

“At first I think we were scared how tall they were,” said Hudson. “We have some tall players but their whole team was really tall. After we got the momentum we kept it up. I think we served pretty well and pass better after the first set.”

Rising Sun got out to a quick 11-4 advantage in the 3rd set, but Poly climbed to within 17-13 after Courtney Roundtree’s kill at the net. The Tigers answered with four straight winners, including Hudson and Kendall Lammers combining for a block kill and Abby Kegley’s ace to pull away.

Rising Sun led 15-10 in the 4th set after Eckerd’s kill before Poly rallied to tie at 21 on Roundtree’s kill. Another Roundtree kill had Poly within 23-22, but back-to-back hitting errors ended the match.

Roundtree finished with 13 kills and Tenea Robinson and Janeal Homer each added five kills. It was Poly’s first loss since last season’s 5-set loss to Southern Maryland’s Huntingtown in the Class 3A South Region final.

“We have the talent and skill, it’s just a matter of believing,” said Peace-Able.

Poly, which hasn’t loss a set in city league play, has Douglass and Edmondson to finish regular season play. The Engineers will play in the city final, Oct. 29 at Forest Park.

Rising Sun has UCBAC Chesapeake matches with Bohemia Manor and Havre de Grace before hosting No. 7 Bel Air to end the regular season. The Tigers reached the Class 2A state semifinals last year.

Wilson, who has six sophomores in his rotation, recently went with a starting lineup in back-to-back matches.

“I’ve been waiting for some kids to train up so they can contribute,” said Wilson. “Are we where we need to be? Not yet.”