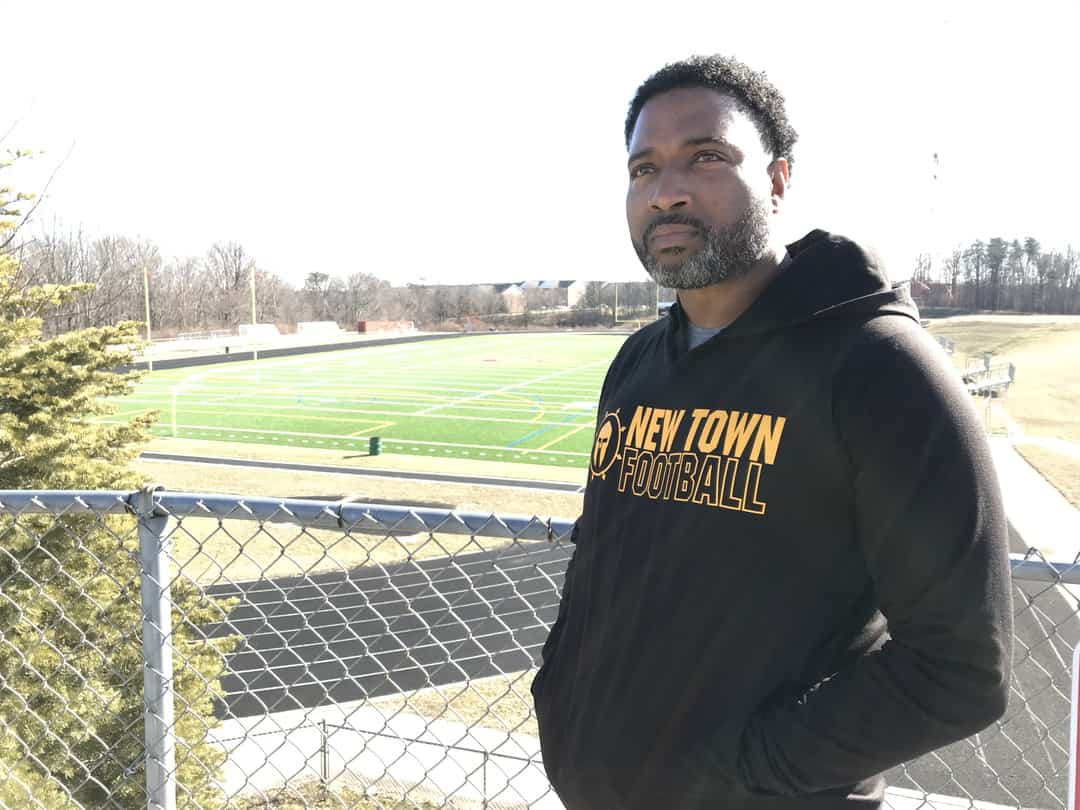 As a football coach, Mike Savage always pushes his players to fight through adversity and never give up.

He’s told 5-year olds in the Pikesville Wildcats youth program and he’s told teenagers on New Town High School’s team that they can accomplish big things not just on the football field but in life if they follow that advice.

Savage is now determined to follow his own advice in the fight of his life.

In June, he was diagnosed with ALS, commonly known as Lou Gehrig’s disease. There is no cure for Amyotrophic Lateral Sclerosis, a neurodegenerative disease that leads to the brain’s inability to control muscle movement. Life expectancy is usually three to five years although some patients live much longer.

Headed into his second season as New Town’s head football coach when the diagnosis came, Savage, at first, didn’t want anyone to know.

“Mentally, it was tough to swallow. I’m just like, ‘God, what’s next?’

“One night I was in bed sleeping and I know it was God, He came to me and He said, ‘You’ve got to tell everybody. Everybody’s got to see this,’ and in my conscious mind, I was kind of like, ‘Wow, God showed me my purpose again in life and it’s these kids’. Sometimes in football, it don’t look like you can make it, but as coaches, no matter how hard the situation looks — game, practice — we want, we force them to fight through and we all know that these kids look at us. Every step we take as adults, as coaches, as mentors they look at. They’re seeing what we’re going to do next.”

When Savage finally opened up, he was straightforward about the disease especially in emotional conversations with his four sons, Joshua, 30; Michael, 26; Aaron, 23; and Brandon, 20; and his “adopted” son, Anthony “Fish” Smithison, 25.

Michael, who learned of his father’s diagnosis in October, said he’s been most impressed by his openness.

“To be able to look in the mirror and say, ‘This is what I’m going through. I’m not going to shy away from it. I’m going to live life. I’m going to be proud,’ Dad is really growing even more from this situation. Especially for men in general, we like to bottle stuff up sometimes. He’s been honest with me… The only way to become truly stronger from anything is to acknowledge when a problem arises. His honesty and his openness and his transparency I probably admire the most.”

At times, Savage can’t hold back tears when talking about his sons, but they still enjoy lighter moments too.

“I think my baby thinks I’m his son now,” Savage said with a laugh. “He’s like, ‘You should go to bed early and get up and get a good breakfast.’”

“I guess you could kind of say I’ve taken on the dad role with him,” Brandon said. “It’s been kind of cool. He’s my best friend more so now than ever. I’m just making sure he’s taking care of himself, taking his vitamins, eating properly, drinking enough water.”

Brandon, a Milford Mill graduate, and Aaron, a Dunbar graduate, play football at Norfolk State and didn’t learn of their father’s diagnosis until they came home for Christmas.

During previous winter breaks, Brandon and Aaron spent most of their time visiting friends and working out. This year was different.

“It was more chilling, hanging out, talking,” Brandon said. “We sat on the couch for hours and fell asleep on the couch. We’d still be training, but we definitely dialed it back. We spent a lot of quality time together.”

Their father has been grateful for every minute.

“As tight as we all are, it was like the bonds got that much tighter. My boys check with me every day. I wake up to a call. I wake up to a text. We’ve even got a group voice call,” Mike Savage said.

Savage first suspected something might be wrong last summer when his right arm wouldn’t stop twitching at night.

He had played a lot of football from youth to semi-pro with the Baltimore Rams, so he thought it was “an old football injury.” An Army veteran who’s been a sheriff with the Baltimore City Sheriff’s Office for 20 years, he noticed weakness in his right hand while at the gun range.

“I could barely load my magazine and I was like, ‘What’s going on?’ It led me to go to my doctor and he told me to go to a neurologist.”

The diagnosis came quickly and a second opinion at the Johns Hopkins ALS Center confirmed it.

“I looked at [the doctor] and it kind of made me mad. I guess my toughness kicked in: ‘You’re not telling me I have three to five years. I’m Mike Savage.’ I guess my machoism was saying that. Then I said, ‘All right.’ I came up here (to New Town High School) and I didn’t say anything.  I got a second opinion… and they said the same thing. I started Googling it and looking at the symptoms. It was tough.”

Savage said his arm has gotten weaker, but he hasn’t felt any other symptoms.

Although ALS progresses rapidly in many patients, it can advance slowly, said Dr. Jeffrey D. Rothstein, director of the Robert Packard Center for ALS Research at the Johns Hopkins Hospital School of Medicine.

Progression often moves in “windmill fashion” around the four limbs, said Rothstein, but it can also begin in the whole body or just the speech muscles or breathing muscles. Patients eventually die because they can’t breathe, he said. Some, including former Raven O.J. Brigance and physicist Stephen Hawking, opt for a ventilator which can prolong life indefinitely.

Savage’s symptoms have not advanced much in the past eight months and although Rothstein is not treating him, he said Savage likely will not have a rapid progression.

“It’s not a disease that tends to speed up suddenly,” Rothstein said. “It tends to keep its own pace, so if you’re slow in the beginning, you’re not about to become a fast person later on.”

However at this point, he said, it’s too soon to be sure.

“When we look globally at patients, the grand scheme of thousands of patients, patients live about three to five years from the time the disease is diagnosed to the time they pass away, but there’s lots of exceptions. I’ve had patients who’ve lived 20 and 30 years. Not a lot of them, but it happens. In the beginning, I didn’t know they were going to have such a long course.”

Rothstein said only FDA-approved drugs will slow the disease, but Savage has opted for a holistic approach. He said there were so many potential side effects that he preferred a better quality of life for a shorter time than taking drugs that could adversely affect him now.

He’s eating clean, taking vitamins, getting acupuncture and undergoing treatments to flush toxins from his system. He said he feels fine and plans to continue coaching the Titans, whom he has twice taken to the state Class 2A semifinals. Last fall, they made it after pulling off a stunning 3-0 overtime upset of No. 1 seed Douglass-Prince George’s County in the quarterfinals.

“Mike’s one of those guys who’s always going to try to get the best out of every situation,” White said. “Mike knows this, but when we’re on the field, we’re just going to go after him. [Otherwise,] we’re going to pray for him and we’re going to support him.”

An East Baltimore native, Savage was brought up by his mother and his grandmother. Determined to be the father he never had to his own sons, he also has been a father figure and mentor to other young players on his teams.

Titans senior Elijah Lawrence said Savage is helping him through a rough time as his mother battles brain cancer.

Lawrence quit the Titans team in the 10th grade convinced that he wasn’t very good, but Savage talked him into trying again. The defensive end-outside linebacker is now headed to West Virginia Wesleyan on scholarship to play football and study computer science.

“I just felt so overwhelmed that I couldn’t do it no more, but then Coach Mike, he helped,” Lawrence said. “He, being a soldier, helped me progress even more. I can’t just go home to my mom and cry. I’ve got to always keep that smile on my face for my mom and my brother and sister.”

Full of encouragement, it read in part, “You have touched and changed thousands of young men’s lives and your name will go in the hall of fame of the great men who have walked this earth I promise that. You just hold on, you just don’t lose heart in the midst of this life storm…”

Smithison, now a Baltimore Raven, met Savage when he was 4 years old and moved into the coach’s home just before high school. Smithison’s parents were in and out of jail “in the drug game,” he said, so he spent a lot of summers with the Savages before he moved in. He credits them with keeping him out of trouble.

“They treated me like their son,” Smithison said. “As a child you don’t think much of it, Now as I get older, I see what kind of person it took to take on another child. That just takes another kind of person. For him and his wife to do that, that was really big.”

Football players aren’t the only young people Savage has helped over the years. 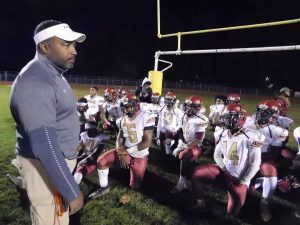 New Town football coach Mike Savage talks to his team after a 2018 contest. Savage, who’s guided New Town to the Class 2A state semifinals in his first two seasons, plans to continue coaching.

“One day I came around his house and I get to the corner and I see all these kids with bikes,” Anderson said. “I look and he’s in the garage with all these kids around him. He’s fixing their bikes. One kid said, ‘I don’t have a bike.’ Mike had a bike hanging on the wall and he said, ‘Well, you can have this one,’ and he gave him the bike. Kids are just drawn to him.”

Family, former players and friends such as Anderson, whom Savage met playing arena football in the mid-90s and now considers his brother, give him strength and comfort as does his faith in God.

“An amazing thing that happened with all of this is God will put people in your life that will comfort you and help you go through it and I’m talking about blessings beyond blessings out of nowhere. My brother (Anderson) said, ‘Mike, if it’s your time to go, won’t be a better place to be than with the Lord…’ I said, ‘Man, you’re right.’ My brother reached out and picked me up. He said, ‘But in the meantime, you’ve got a job to finish,’ so here we are.”

As Savage looked out on the new turf field at New Town awaiting a stadium soon to be under construction, he said he plans to coach as long as possible, maybe from a wheelchair if necessary.

“I would love a year or two from now to be still walking and striving and saying, ‘I battled it and it went into remission,’” he said. “I know they say that’s impossible, but with God, anything is possible.”