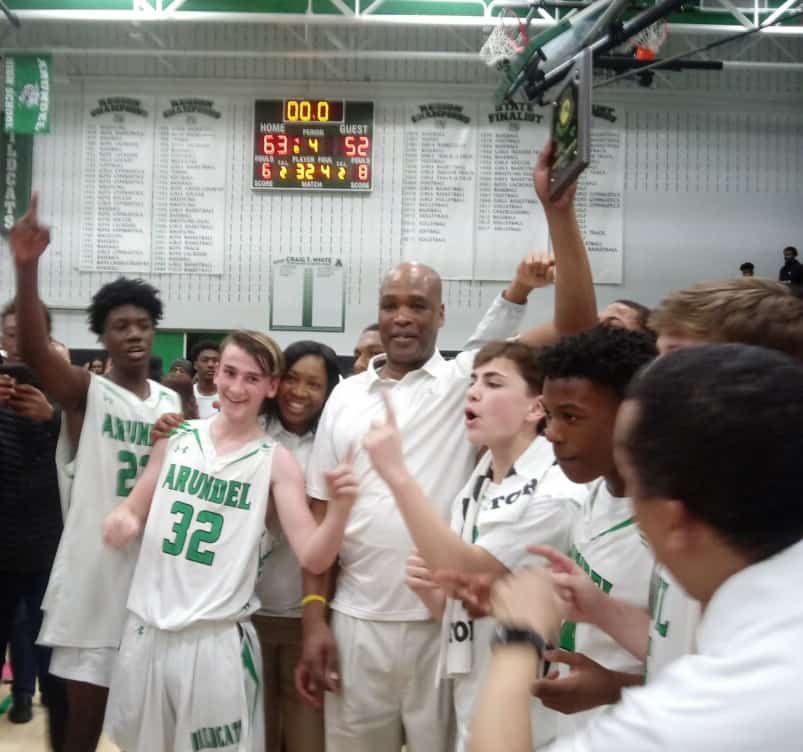 Arundel boys basketball coach Rodney Ramsey holds up the region championship plaque as his players celebrate Thursday evening. The Wildcats defeated Meade for the 4A East Region I title in front of a capacity audience in Gambrills.

An 11-point margin might suggest Arundel High boys basketball cruised to victory over Meade on Thursday. While the Wildcats did win the Class 4A East Region I title with a 63-52 victory over the Mustangs, in front of a packed home audience in Gambrills, it was thanks to a dominant five-minute stretch to close the game.

Nigel Omotosho scored all eight of his fourth-quarter points in the final stretch for Arundel, which closed on a 15-4 run after the game was tied at 48 at the five-minute mark.

Arundel (15-10 overall) won its 10th region title and first since 2001. The Wildcats’ 10-10 record in the regular season in games that counted toward the region standings will most likely force them to play at the top seeded team in Saturday’s 4A state quarterfinals. Four teams who won region titles on Thursday have 17-3 records, which would force a tiebreaker.

“I told my team that everything we saw during the regular season we were going to see tonight,” Arundel coach Rodney Ramsey said. “They understood that if we got down, we could get back into the game.”

The game was tight through the first three and a half quarters, with neither team leading by more than seven points. There were six ties in the first half, but Meade jumped out to a 32-25 lead midway through the third quarter. The Wildcats fought back and went into the fourth down by just a point.

Arundel rallied to take a three-point lead, but Meade’s Omar Beattie hit a 3-pointer at the 5:10 mark to tie the game.

From there, it was all Arundel.

T.J. Speight scored 18 points to lead Meade (11-14), which advanced to the region final with road wins over Old Mill and the region’s No. 1 seed, North County. Beattie hit a pair of 3-pointers in the second half and finished with 12 points for the Mustangs.

“I just told the guys they had to dial in, focus and trust the process,” Ramsey said. “That’s exactly what they did. They trusted what we were doing in practice, they believed in the coaches and they played their hearts out.”

Omotosho and Tyson Brooks each scored 14 points to lead Arundel, which had four starters in double-figures and received 53 of its 63 points from the starting five. Quaadir Spence scored 12 points, including five in the fourth quarter, Robert Keith added 11 (nine in the second half) and Azim Sana added eight points off the bench for Arundel.

“I’ve wanted this since I was a freshman and now it’s a reality,” said Brooks, a junior. “We turned it on in the playoffs and it all started in the practices. We have a lot of haters, but they’re going to see us at states.”

CLASS 4A EAST REGION I CHAMPIONSHIP