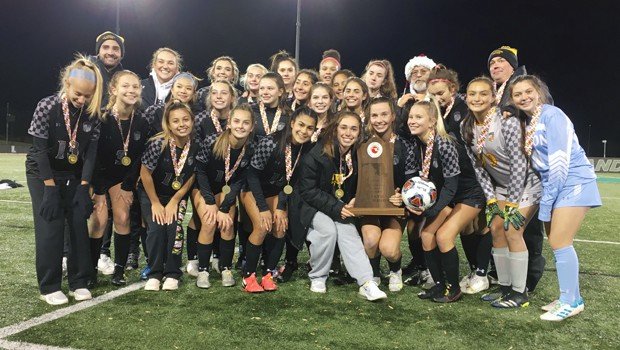 That stingy trend continued unabated in the 3A girls soccer state championship match at Loyola University’s chilly Ridley Athletic Complex on Friday night with a 1-0 whitewash of Howard County neighbor River Hill, which boasted a stunning 13-0 record in state finals entering the contest.

It was Hebron’s 10th straight shutout — including a 2-0 verdict in early October that was coach Tim Deppen’s first win over the Hawks in nearly two decades — to cap off a season in which rivals could only muster four goals all season against that staunch backline.

With that kind of ‘D’ going for them, the Vikings (15-2), who claimed their first-ever crown in their only championship game appearance, knew that they only needed one goal to secure the title.

“Once we get a goal, we take it to a new gear,” senior defender and captain Lauren Gustafson said.

The goal came in the 32nd minute when forward Sinclaire Green notched her team-best 18th goal of the season off a rebound from fellow sophomore midfielder Olivia Hooper’s shot that ended up near the goal line to beat standout senior keeper Caroline Duffy.

With one goal, the Vikings were golden and the Hawks were up against it.

“One of their midfielders crossed the ball in from the top of the 6,” Dully, a Duke University commit, said. “Unfortunately, it was a bad deflection, but that happens sometimes.”

Regardless, the ball found Green — or Green found the ball — and the rest is history.

What happened after that was that the Hebron backline of Gustafson, seniors Katelyn Hanks and McKenna Bishop, sophomore Ainsley Wilson and freshman Kaitlyn Magdar put on a defensive clinic.

“Our defense has played well all over the field all season,” Deppen said, with Wilson and Magdar being anchors despite their youth.

“(Magdar) has been destroying our opponents’ best offensive player all season,” he said. “Ainsley has been very good, too.”

The unit even tightened up more after senior Ana Hoover’s mid-season knee injury sidelined her, putting even more of the onus on Gustafson to provide leadership.

“They’re like a brick wall,” Deppen added. “The constantly cover for each other.”

The Hawks (12-4) did have a couple of chances to equalize, scant as they were.

Senior defender Kaitlyn Heitzman bombed a 30-yarder that sailed high a couple of minutes after Hebron’s goal and senior midfielder Vivian Yao was close to connecting just before halftime.

In the second half, senior midfielder Alyssa Barker’s offering floated over the goal in the 45th minute and Duffy took a crack at scoring her second goal of the season — the first was a game-winner against Reservoir — on a free kick in the final seconds that drifted wide.

“This was probably not one of our stronger teams, A to Z,” said River Hill coach Brian Song, VSN’s Co-Coach of the Decade. “But after we lost to Mount Hebron (during the season), we went on a nine-game run. We knew this would be a one-goal game and they played their hearts out. I can’t fault the effort. Sometimes the ball doesn’t bounce your way.”