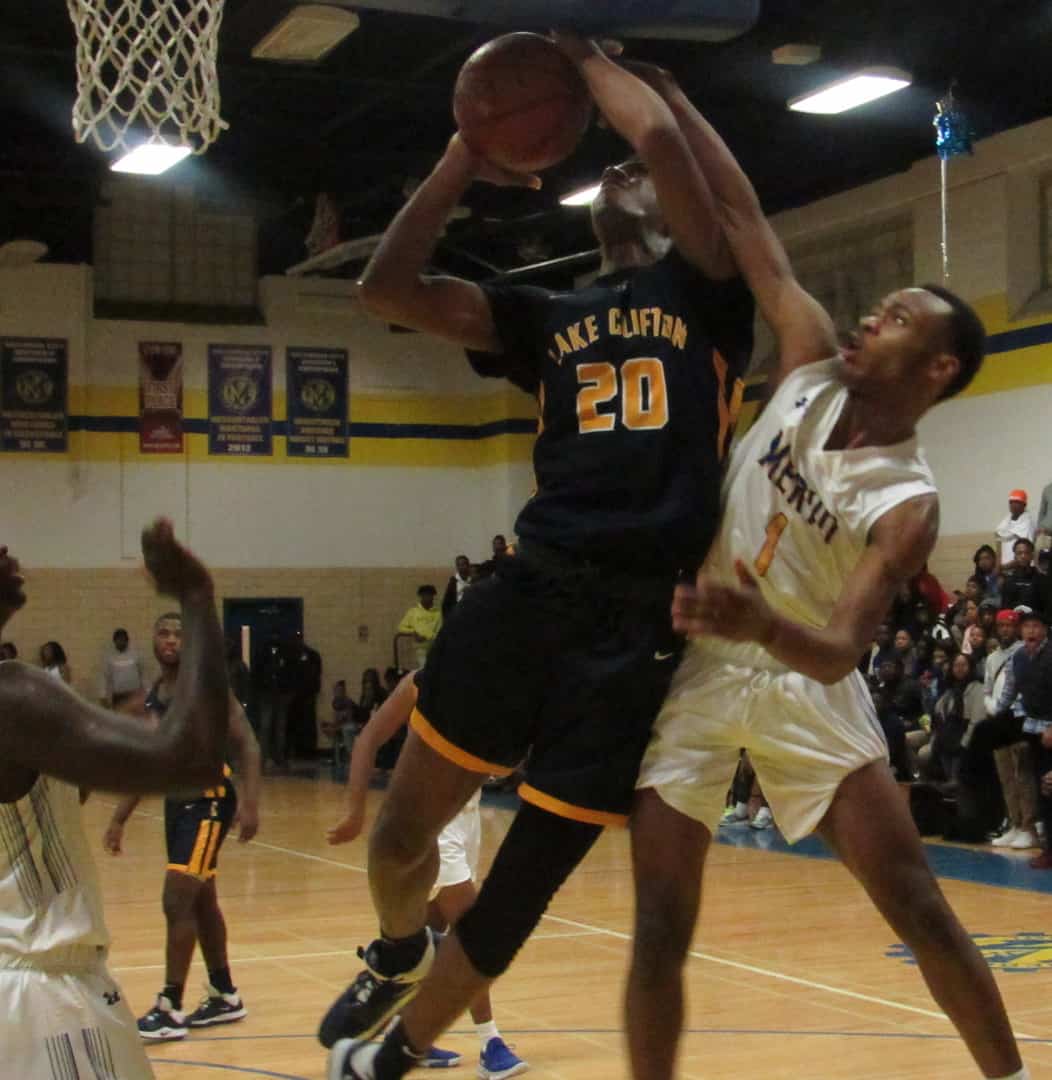 With every Mervo High blocked shot and basket in the early minutes of Thursday’s Baltimore City boys basketball game, Lake Clifton’s title aspirations were spinning away. Fortunately for the Lakers, a game is a 32-minute marathon and their intestinal fortitude proved out.

No. 7 Lake Clifton defeated the eighth-ranked Mustangs, 56-43, in a city league A Division match in Northeast Baltimore. Junior guard Zac Blackwell finished with 21 points for the Lakers (10-4 overall).

The St. Lo Drive school withstood a 17-1 opening blitz and rallied from a 11-point halftime deficit to remain tied for first (4-0) with City College (5-0) in the A Division. Top-ranked Poly has the lead in the B Division (5-0).

The top team in the A and B Divisions will play for the city title, Feb. 25 at Morgan State University’s Hill Field House.

The Lakers, as usual, are in the hunt, courtesy of a resilient effort in front of packed Mervo gym.

“They [Mervo] came out the way they supposed to,” said Lake Clifton coach Herman Harried. “They came out with high intensity…they came out to put the visiting team away.

We weathered the storm. All I asked the guys to stay together, don’t start arguing, don’t start taking poor shots, don’t start panicking. You got to walk to take steps.”

The Lakers walked down, then lapped Mervo in the second half, outscoring the hosts, 34-10. The Lakers got major contributions from KJ Spruill and Jalen Morris, who each had 10 points, and reserve guard Andre Davis provided a defensive spark.

“We kept just our heads,” said Spruill, who pulled down eight rebounds. “At halftime, Coach said stick together. After that, we got in them.”

Gray, the Lakers’ leading scorer, struggled offensively Thursday, but he and his teammates harassed Mervo defensively in the second half.

After back-to-back jumpers from Blackwell gave Lake Clifton its first lead, 38-37, in the third, Gray snatched Spruill’s missed free throw and put the ball back in the basket, making it 41-37. Seconds later, he stole the ball and drove in for a layup, pushing Lake’s lead to 43-37.

Blackwell’s transition score, set up by another forced turnover, made it 51-41 with 3:29 left in regulation. The Mustangs made four field goals in the second half.

Blackwell said the Lakers were confident after halftime.

“His [Harried] main thing was stay together and trust each other,” said Blackwell. “He said once we got them, they were going to tighten up.”

“When things get difficult, they look at me. I stay positive the entire time…they’re going to follow my lead,” said Harried, whose has won more than 400 games in three decades at Lake Clifton, and last season, became the first coach in Maryland to win a state title in all four classifications. “I stay positive, they stay hungry. We just made plays and went up.”

It was vastly different at the start as Mervo, sparked by Elijah Rantin’s defensive dominance, stunned the Lakers. The 6-foot-9 senior blocked a shot in each of Lake’s first three possessions.

Rantin finished a pass from Carlos Alexander, putting Mervo up 9-1. Will Thomas hit a short jumper and Alexander converted a three-point play after a steal and going in for a layup.

Alexander, a transfer from St. Frances Academy, dropped a three-point dagger from the corner, making it 17-1 with 4:25 left in the first. Blackwell got Lake Clifton’s first field goal on a three-pointer with 3:29 left in the period.

The Lakers settled in, scoring seven straight points, but Mervo nursed the lead back into double digits and led 33-22 at halftime. The Lakers missed two relatively easy layup attempts and Thomas finished the frantic sequence with a dunk, putting Mervo up 37-29.

The Mustangs didn’t score again until Thomas, who finished with a team-high 14 points, opened the fourth quarter scoring. The Hillen Road school wasn’t able to produce in the half court as Lake Clifton close off passing lanes and transform turnovers into transition points.

“They just showed a true sense of resilience and mental toughness. I think ours were broken going into the fourth quarter,” said Mervo coach Deron Harding. “Even though we’re senior-laden, we have a team that’s not familiar with this kind of spotlight and playing these kind of games.”

KJ Spruill (left), Michael Gray and Zac Blackwell led an impressive second half rally by Lake Clifton Thursday. The Lakers play at undefeated and No. 4 City College Tuesday for first place in the Baltimore City League A Division.

In a match that will likely decide first in the city A Division, Lake Clifton visits fourth-ranked City Tuesday on The Alameda. The Knights, who defeated Forest Park Thursday, is the area’s only undefeated team (15-0).

“It gets no easier…they’re similar to Mervo with their guards and size in the middle,” said Harried. “Hopefully, we don’t get into a hole this time.”