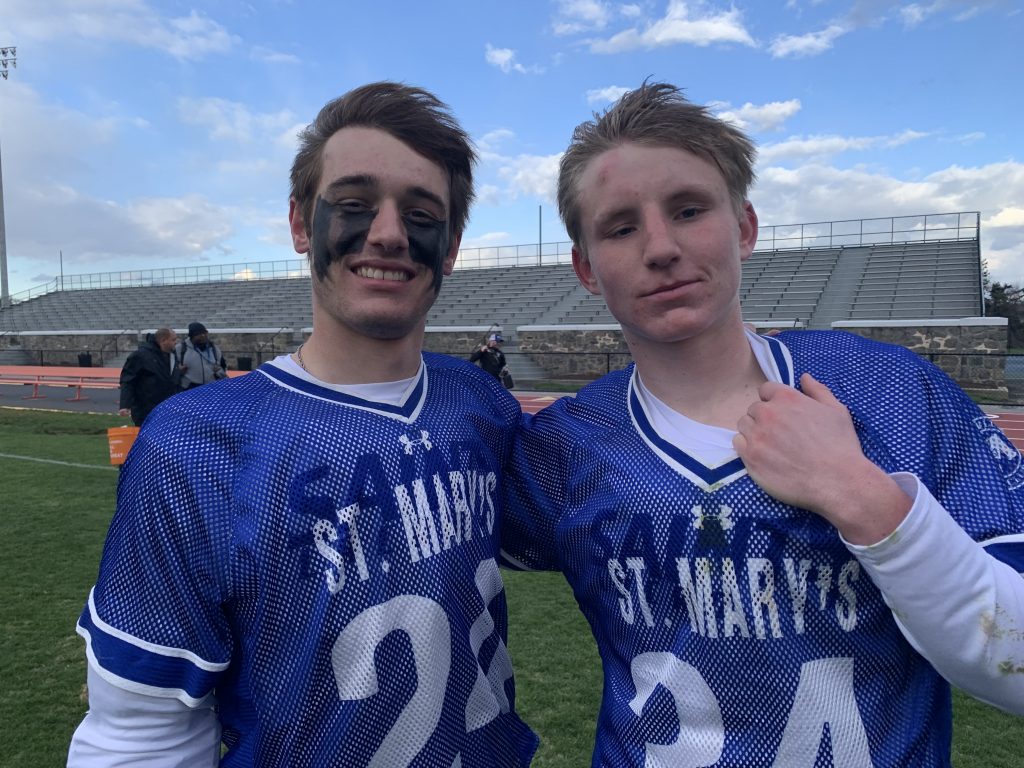 After postgame handshakes following its victory over McDonogh School Tuesday, a couple of St. Mary’s boys lacrosse players each did flops into a puddle of water on its sidelines.

Being undefeated in the MIAA A Conference makes you do crazy things.

The second-ranked Saints remained perfect with a 7-6 victory over the No. 3 Eagles at John McDonogh Stadium in Owings Mills. Junior attack Nick Golini finished with three goals and Will Hopkins added a goal and an assist.

St. Mary’s established an early three-goal advantage, then came up with a couple of critical plays in the final seconds in cold and blustery conditions to improve to 11-0 overall, and 4-0 in MIAA A play.

“We don’t have the best players in the MIAA A, we have a team that plays together and that’s what it takes at this level,” said St. Mary’s coach Victor Lilly. “We have 47 guys and every guy contributes.”

“We got great vibes all around. It’s a gritty team,” said Saints senior defensemen Riley Reese.

Reese, who’s headed to the University of Maryland in the fall, along with fellow longsticks Sam Palmisano (Air Force commit) and Dillon Torggler (Penn State), kept the Eagles’ offense off the scoreboard for the first 14 minutes of regulation. Will Hopkins and Jake Adams each had crucial second half tallies.

Sophomore faceoff specialist Teddy Androus came up with possession after a scramble post faceoff, and Golini ran off the final 15 seconds to secure another gut check road victory. The Saints rallied at Calvert Hall two weeks ago.

“It’s a long bus ride, everyone was focused and locked in,” said Golini. “We did what we had to do and we did it from the start.”

Golini, who’s committed to the Naval Academy, ignited the Saints with two unassisted goals in the opening period. Bobby Keane fired a shot that McDonogh goalie Anthony Wilson stopped with his stick, but Eric Chick scooped up the loose ball and put into the goal, advancing St. Mary’s lead to 3-0.

The three-goal advantage stood at half, 5-2, after Golini secured his hat trick. McDonogh, behind individual efforts by Firlie, pulled to within two twice in the third quarter.

St. Mary’s countered each time as junior Jake Adams, working his way a couple of feet in front of the goal, finished off a pass from Gavin Burlace, for a 7-4 advantage with 7.4 seconds remaining in the quarter

“Jumping out early is big in this league, but McDonogh is never going to go away,” said Lilly. “Every game in this league is a dogfight.”

The Eagles (7-4, 3-2 MIAA A) showed bite in the fourth. Hugh Brown scored off a helper from junior McCabe Millon early in the period, and Firlie completed his hat trick with an assist from Millon, pulling the Eagles to 7-6 with 34.1 seconds left in regulation.

McDonogh was unable to complete a comeback as Androus came up with the ball with about 21 seconds left. The Saints called timeout with 15.5 seconds remaining.

“They’ve been through a ton of battles, they’ve learned their lessons from their close games,” said Hilgartner. “They’re well coached, really disciplined, everything we weren’t today.

Offensively, we couldn’t get it going. We hit some pipes, but also we didn’t take great shots a lot of the game and turned the ball over, and you can’t do that against a good team.”

The Saints’ 11-0 start is the best by a MIAA A team since Boys’ Latin in 2014. The Lakers ran the table (18-0) to claim the league crown as well as the mythical national title.

“We got 48 minutes with St. Paul’s, that’s what the focus switches to,” said Lilly.