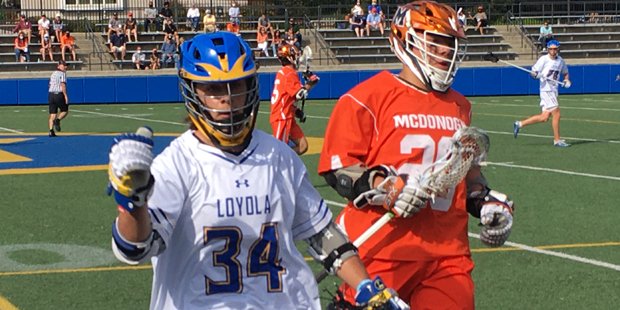 Knowing emotions would be running higher than usual in its MIAA A Conference lacrosse game with Loyola Blakefield on Tuesday afternoon, McDonogh made sure that it stayed in control throughout the contest that ended with its seventh straight victory to open the 2021 campaign. 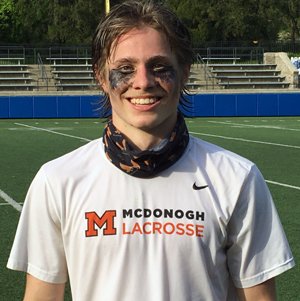 McDonogh sophomore attackman McCabe Millon was on fire in the Eagles’ 13-8 victory over Loyola Blakefield, which was completed on Tuesday afternoon in Towson. Millon totaled eight points (3 goals, 5 assists) to help his team to run its winning streak to 7-0 to open the MIAA A Conference season.

After all, the game was a re-start of the contest that actually began April 16 and was halted with one minute remaining in the opening quarter and the Eagles ahead, 4-0, after a shot by McDonogh’s McCabe Millon inadvertently struck Loyola freshman defenseman Peter Laake, who was revived by the team trainers’ quick application of an Automated External Defibrillator.

Even though Laake was said to be “alert” as he was transported by ambulance to a local hospital, the traumatic nature of the injury was frightening enough that the game was postponed until Tuesday when it picked up where it left off — with McDonogh’s prolific offense continuing to have its way while building an 8-2 halftime advantage on the way to a 13-8 triumph.

The win was especially sweet for Millon, a smooth sophomore attackman who finished with a game-high eight points by contributing three goals and five assists.

“I’m really thankful to be out here playing the game that I love and that Peter is OK,” Millon said, noting that he has gotten to know Laake after the accident.

With the thought that the Dons might have a psychological advantage entering the re-start, McDonogh knew that the best way to quash that notion would be to strike quickly.

The Eagles (7-0 overall, 7-0 conference) did just that when Millon sandwiched feeds to senior attackman Jack Horrigan around his own solo effort to build the lead to 7-0 before Loyola finale broke through midway through the second quarter when TJ Gravante found fellow senior attackman Henry Tolker on the doorstep to cut the advantage to 7-1.

“We stressed in practice that we couldn’t let them have the momentum” (when the game re-started), Millon added.

With that taken care of, the Eagles’ chances to remain perfect this spring were definitely in their favor.

They could even afford to trade goals with Loyola (3-3, 3-3), something future Maryland Terrapins, McDonogh’s Dante Trader and his Loyola senior midfielder counterpart Kevin Tucker, did before halftime as the Eagles held an 8-2 advantage at the intermission.

Horrigan then struck twice in the first minute of the third quarter, first by converting a Millon feed and then after picking off a clearing pass to pad the cushion to 10-2.

At that point, Loyola coach Gene Ubriaco said that the Dons “could have folded our tents.”

Instead of breaking down even further, Loyola displayed some gumption by outscoring the Eagles, 6-3, from that point.

Yes, it was too little, too late, yet it had Ubriaco pleased with the effort.

“I feel a lot better about our group after coming back from such a weird situation,” he said.

Having to replace Laake, a longstick middie, with Matt Rice seemed to work well for the Dons as they became more adjusted to the new lineup.

The coach said that he also liked what he saw from Gravante, who battled McDonogh’s physical backline to assist senior attackman Charlie Koras’ second goal — and the final goal of the game — with just under four minutes remaining in regulation.

Koras had started the Dons’ final charge with a crafty individual effort before Tolker also rippled the net that made it, 10-4.

Trader’s third goal early in the fourth period calmed things down for the Eagles, who gave up goals to Cook and Koras to end the contest but were never really in danger of losing.

“I had mixed emotions about how we were going to play,” McDonogh coach Andy Hilgartner said. “When we went up, 12-4, we got lackadaisical and took some rushed shots. But we got one back in the fourth quarter, and that made us feel comfortable.”

Loyola will be tested again on Friday by hosting Archbishop Spalding while McDonogh travels to Brooklandville to meet St. Paul’s that same day.

Pictured above: A pair of sophomore midfielders, Shane Elliott of Loyola Blakefield (left) and McDonogh’s Zach Hayashi charge towards the box after a face-off in the Eagles’ 13-8 triumph in a Tuesday game which was restarted after a serious injury to Loyola freshman Peter Lake force a suspension of the contest on April 16th.