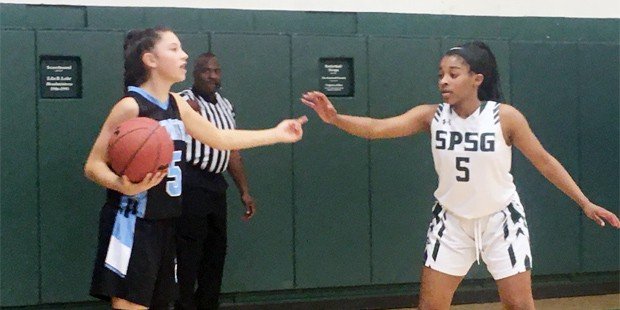 No. 9 St. Paul’s for Girls handled some early-game adversity against St. Timothy’s on Wednesday in Brooklandville like a team that knows what it’s doing and, more importantly, where it’s going. 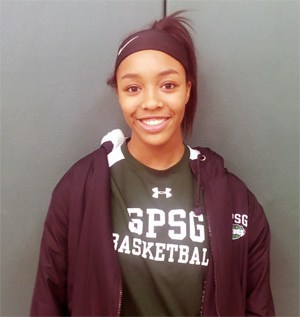 Sophomore guard/forward Madison Beale hit the game-tying 3-pointer at the buzzer, played tight defense and grabbed some key rebounds in St. Paul’s 46-34 victory over St. Timothy’s on Wednesday in Brooklandville in a showdown for first place in then IAAM B Conference

And from the looks of things as members of the IAAM B Conference jostle for post-season seeding, the Gators appear to be on track to defend the title they earned last February.

Trailing, 19-13, with just over two minutes left in the first half, SPSG coach Pat Conrad called a timeout that turned the game on a dime.

Employing an energetic zone press helped St. Paul’s to rally within striking distance and ultimately deadlock the score at the halftime buzzer on a 3-pointer from the corner by sophomore guard/forward Madison Beale that found both sides of the iron before dropping through the net.

The Gators then took the lead early in the third period and eventually pulled away in the fourth quarter to claim a 46-34 victory over 17th-ranked St. Tim’s and remain unbeaten in B Conference play.

It was their 12th straight triumph over a B Conference opponent, including the 2019 postseason.

Senior guard Destiny Ryles, held mostly in check before the intermission, exploded for 16 points of her game-high 20 points in the second half tp pace St. Paul’s (15-3, 7-0 conference), which has not lost to a league rival since bowing to Our Lady of Mount Carmel late last January.

“We work hard on the press,” said the 5-foot-7 Beale, who also plays tight defense in the Gators’ 3-2 zone in half-court sets. “We’re fast and we can get to the ball (on a trap). We like to run the court, and we feel like we’re in better shape than some of our opponents.”

“We like to speed things up, and make teams play at a pace they don’t like,” Conrad said after his team forced 26 turnovers in the contest.

That was especially true in the second quarter when coach Vernon Harris’ club went on a 13-2 run that turned an 11-6 deficit into a 19-13 advantage.

It started with a 3-pointer by sophomore point guard Laela Martinez quickly followed by a foul-line jumper by versatile freshman Andea Cherisier, who then made two free throws to give her team the lead, 13-11.

After St. Paul’s senior wing Esprit Cha buried a baseline jumper to knot the score again, Cherisier went to work in the paint with deft moves for back-to-back buckets.

A 3-pointer by senior guard Alex Sawyers followed by a Cha layup brought the Gators closer until another St. Tim’s freshman, Aryss Macktoon, converted a steal to put her team ahead, 21-18, with a few seconds remaining in the half.

However, that’s when Beale’s bomb tied the score and the Gators never trailed again.

They were still looking for a way to get some separation while nursing a 34-31 lead entering the final period when Ryles went coast-to-coast for an old-school 3-point play.

St. Tim’s never got closer than four points after that, and it happened just once.

“I think coming into the game, you know, No. 1 (in the conference) against No. 2, the girls were excited and a little nervous,” Harris said. “I just think our nerves got to us a little bit. I thought Pat did a great job of changing the tempo. But I wasn’t worried about the speed, I was worried about possessions, and we just had too many turnovers.”

With the meat of their schedule coming up against three teams with winning records in conference play (Glenelg Country, Mount de Sales Academy and No. 16 Maryvale), St. Paul’s can lock up the top seed in the playoffs with a couple of more wins.

St. Tim’s still has plenty to play for as it sits in second place, two games behind the Gators and a half game ahead of Glenelg Country School with three conference games remaining.

“I believe we can get there (back to winning ways) if we just play our game,” Harris said.