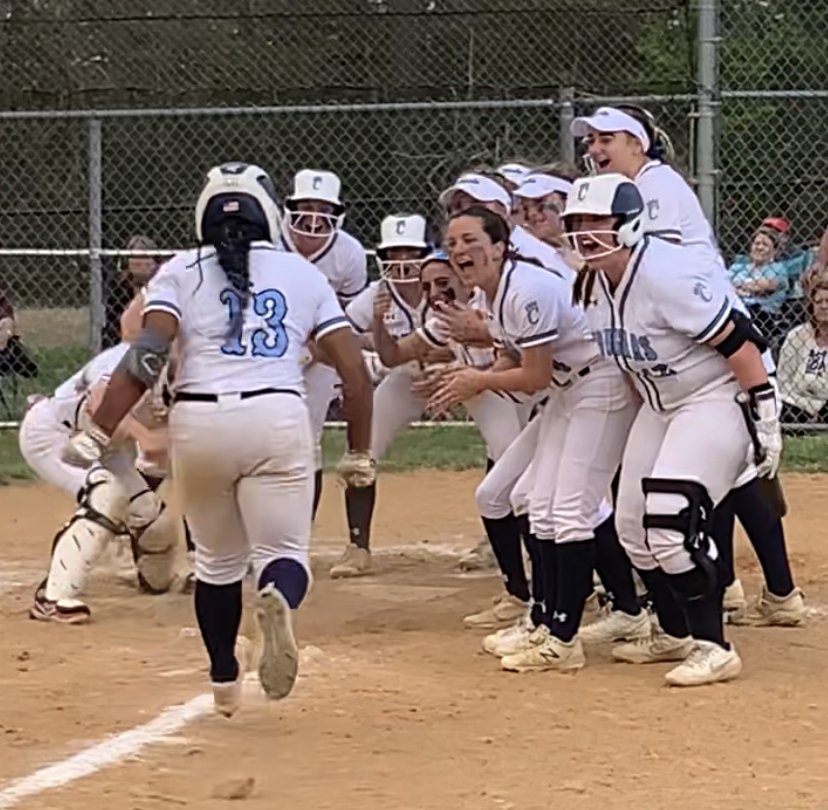 Chesapeake-Anne Arundel softball team awaits teammate Alana Watts (13) to touch home plate after her solo homerun during Saturday’s matchup with Spalding. The third-ranked Cougars sent the top-ranked Cavaliers to a second straight loss in the Anne Arundel County Tournament with a 4-2 decision in Pasadena.

Saturday’s softball showdown between Archbishop Spalding and Chesapeake-Anne Arundel lost some bite after the top-ranked Cavaliers fell earlier in the day.

It didn’t matter to the No. 3 Cougars, who capped the Anne Arundel County holiday tournament and continued their impressive start with a 4-2 victory in Pasadena. Senior pitcher Kendall Thomas pitched a complete game and drove in two runs, and Alana Walls hit a home run for Chesapeake-AA.

The reigning Class 3A state champ Cougars established their presence in the opening stanza against the defending IAAM A Conference champ Spalding, improving to 9-0. Chesapeake topped Frederick, 14-3, in its first match Saturday.

The Cougars were locked in for their first major challenge against their Anne Arundel County private school rival.

“We played our best and it showed ,” said Thomas. “We were focused, we hit the ball, fielded well and I had my defense behind me.”

In the third, Spalding (8-2) caught the Cougars off guard to get back in the game. Ry Clark led off with a single. She hustled towards an unmanned third base after a 5-3 putout. A throw from first got by Thomas, trying to get to third, and Clark scored.

Walls made up for Chesapeake’s lone defensive gaffe in the home fifth. The sophomore took Cavalier pitcher Amaya Carroll’s 3-0 offering about 205 feet over the right centerfield fence, advancing the Cougars’ lead to 3-1.

“I was like ‘just make contact,’ hit the ball where they’re not,”  said Walls. “I looked over to right and saw the rightfielder and I’m like ‘that’s a good spot.’”

Spalding made it 4-2 in the sixth on Taylor Barchanowicz’s two-out RBI double. The Cavaliers went down in order in seventh, capping a rough Saturday in Pasadena.

The Severn school acquired an 8-0 lead after two innings against No. xx Arundel. The Cavaliers didn’t score again as Arundel posted five runs in the fifth and sixth innings for a 12-8 come-from-behind victory to improve to 9-0.

Sierra Williams drove in four runs for the Wildcats, and Madison Hamolia finished with four hits. 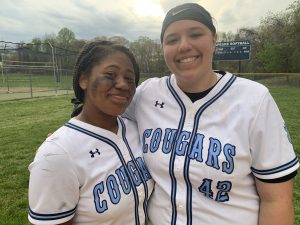 Alana Watts (left) homered and Kendall Thomas drove in two runs and went the distance on the mound as Cougars won their two contests at the Anne Arundel County Tournament to improve to 9-0.

Williams, whose two-run double in the third started Arundel’s comeback, tied the game in the sixth with a sac fly, scoring Bria Sewell. Emma Schurr’s RBI double gave the Gambrills school the lead for good.

Spalding coach Delaney Bell said she made several adjustments in the opening match, looking ahead to a Spring Break tourney trek to Myrtle Beach.

“We want to switch things up…like Chesapeake, Arundel can hit and we knew they can hit,” said Bell. “That game was sloppy, but we fixed it for this game (Chesapeake). It was a game with two good teams.”

“They win for each other. Us coaches are here to get them ready for it and help throughout the game, but it’s them that produce and make it happen,” said Owen, who served as the junior varsity coach the previous 11 seasons. “I’m very proud of them.”

No. 3 Chesapeake-Anne Arundel 4, No. 1 Archbishop Spalding 2

Carroll and Bailey; Thomas and Wenger