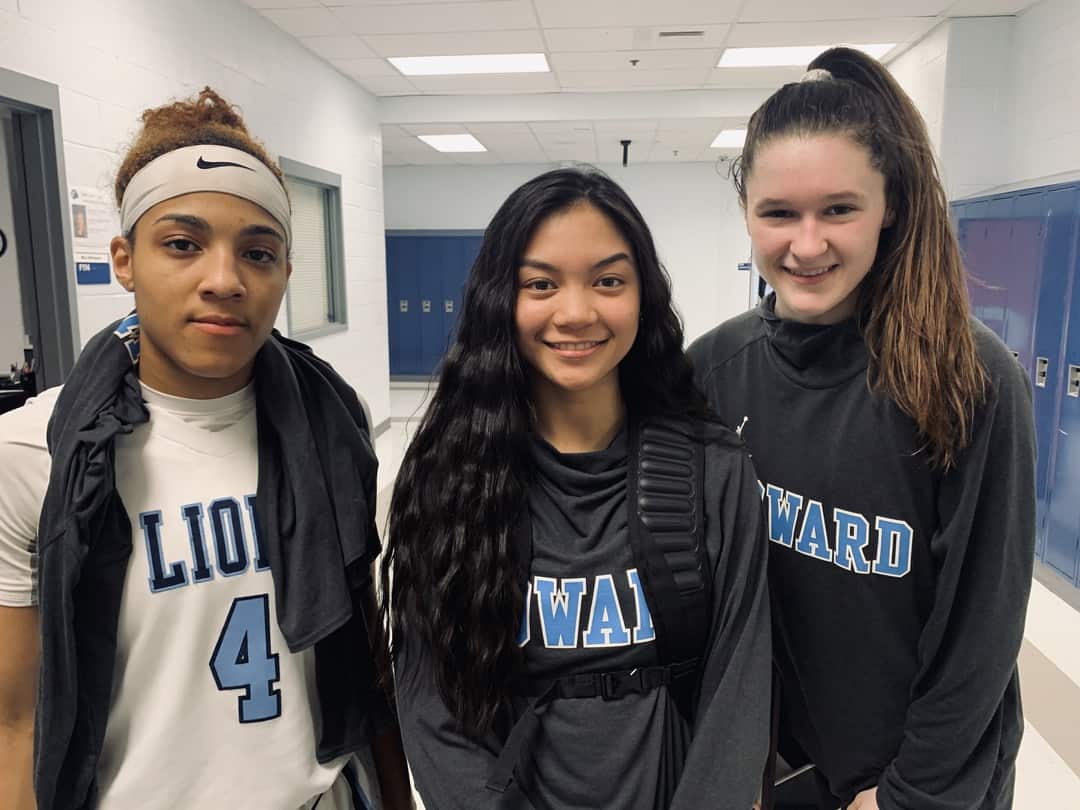 Anii Harris (left), Camille Malagar and Gabby Scott pushed No. 2 Howard to another victory Wednesday. The Lions defeated 10th-ranked Old Mill for the Class 4A North Region I title in Ellicott City.

A little after noon on Tuesday, he had to scrap that plan when he found out Meade had forfeited its semifinal win and Old Mill would come to Howard for the regional final instead. Robinson had scouted Old Mill a couple of times, so he didn’t have much trouble switching gears.

That certainly showed on the court at Howard Wednesday night. The No. 2 Lions got off to a slow start but quickly rallied with smothering defense, a hot perimeter game and a last-quarter punch from senior guard Anii Harris to beat No. 10 Old Mill, 54-36, and earn a trip to the state quarterfinals.

As one of three undefeated teams left in the Class 4A bracket, the Lions (24-0 overall) will host a state quarterfinal game Friday at 7 p.m. The regional winners will be reseeded based on their regular-season winning percentage, so their opponent wasn’t immediately known.

Old Mill (22-2), a state Class 4A finalist last season, used its inside game to get a slim edge early, but the Lions opened the second quarter with seven straight points to take a 16-10 lead on Camille Malagar’s 3-pointer two minutes into the quarter.

The Patriots pulled within two twice before Samiyah Nasir and Gabby Scott scored on putbacks and Emily Durkee beat the buzzer with a 3-pointer for a 25-16 lead. Old Mill never recovered.

Malagar, who hit three 3-pointers and finished with 12 points, said she knew perimeter shooting would be critical against Howard.

“We knew that it’d be hard to get inside with their size. It’s such a big difference between their team and our team,  so I knew that we had to penetrate, kick it out and get better shots from the three,” said the senior guard.

Many of the Lions biggest shots came from the perimeter.  Early in the second half after Jaya Dews pulled Old Mill within 25-18, Malagar hit a free throw and then a 3-pointer followed by an 18-footer from Nasir, a freshman guard who scored a game-high 13 points.

“Teams haven’t pressured us before. It took us a little while to get used to, but we adjusted,” Robinson said. “Then we had girls hit big shots and that was really the key… With Anii getting in foul trouble, I thought Samiyah Nasir gave us big, huge minutes especially for a freshmen on the big stage. She hit some big shots and I thought she played really good defense as well.”

The Lions led by 11 going into the fourth quarter and Harris made sure they finished strong.

After sitting out in foul trouble at several points in the second and third quarters, she sparked a 7-0 run to open the fourth quarter and put the game out of reach. She scored five points and fed Nasir for a layup in the first two minutes of the quarter for a 48-30 lead.

Old Mill’s top inside threat, 6-foot freshman forward Amani Watts is nicknamed “Baby Shaq” for her size and her powerful moves to the hoop. She finished with 11 points and 10 rebounds, but the Lions and especially 6-foot Scott (nine points, 16 rebounds) were able to keep her from dominating the offensive boards.

“I thought they did a good job double teaming Baby Shaq down on the post,” Old Mill coach Rick Smith said, “and with that, I think our interpretation of that was to fire up some ill-advised shots and they weren’t going and [theirs] were and then No. 4 (Harris) comes in and she brings, for like three straight trips up court, brings enough energy that she went straight to the hoop and nobody wants to step in the lane and play defense.”

While the Lions rolled into the regional final with Monday’s 62-35 win over Arundel, the Patriots caught a huge break to advance. Old Mill lost its regional semifinal game to Meade, 66-60, but Meade had to forfeit the win for using an ineligible player.

Smith said some of his players thought he was kidding when they heard from the team captains to show up for practice Tuesday afternoon, but they all did.

Wednesday, in an admirable show of sportsmanship, Meade principal Frederick Rivers and athletic director Jamie Cook stopped by Old Mill with Gatorade, snacks and well wishes for the Patriots as they left for Howard. Smith said they also apologized for having the ineligible player, something they self-reported to Anne Arundel County officials Tuesday.

The Patriots were disappointed in the loss, but Smith said, “We had a great year. Anybody would be happy to have five freshmen coming back at the varsity level and they all played a little bit.”

CLASS 4A EAST REGION I CHAMPIONSHIP